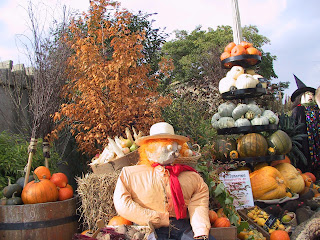 A fine display of pumkins at the botanical gardens. 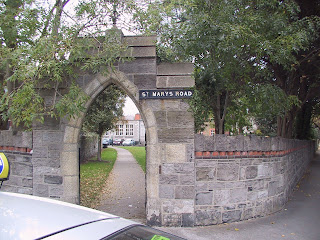 Archway at the top of St Marys rd. 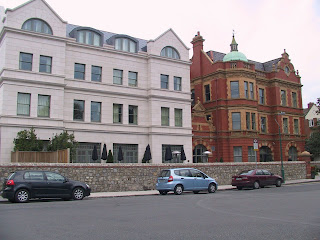 Dylan hotel One of Irelands 6 star hotels, or so I hear.

IF YOU ARE LOOKING FOR THE MAGIC POSTING YOU HAVE TO GO BACK TO AUG 1.

The clocks go back one hour at the weekend, darker mornings, and Christmas is coming
We were in Woodies and all the raindeers and Santas are lined up,
I don't like the falseness of this "Season"

Things are changing on the property front and 3 solicitors are under investigation for using clients money to fund property deals. The banks are pulling back from advancing 100% loans and many houses remain unsold.
This is a result of the over supply of houses and money over the last few years. Years ago I was saying 30 or 40 year loans were mad.
People said "Do you not know another song?"
Bad tenants and late rents can soon bring your property dreams crashing down.

Well I am glad the madness is over.
I only hope we have a soft landing rather than a crash.

Bertie Ahern is looking like he will award himself a pay rise of e38,000.
This will mean that he "earns" more than George W Bush, or Gordon Brown.
Nero fiddles while Rome burns.

Learner drivers have to face new changes in the rules regarding driving.They should have a qualified driver with them at all times. This rule will now be enforced again.
I would like to see a rule where they have to have 10 lessons from a driving school as well.Some of the mad things you see as you drive around, its not all bad taxi driving. Saw a car turn left directly in front of a bus on his left.The bus was moving at the time, He deserved to be hit a broadside.That would have woken him up.

Polish and other guys are having their cars lifted at last. You are allowed to go to Germany, Britian or any other country for your holidays or to work, but only for a few weeks. After that your car must be taken home or re registered and have its NCT done etc. The foreign guys were drink driving and crashing then it was found that they had an invalid insurance. One other thing is if you have a non Irish license the Garda cannot put penalty points on it,many truck drivers are foreign and one truck company has been responsible for over road 40 deaths in 3 years.

Had a guy in the car who worked in IT, spoke of the many companies he had worked which closed down because they would not sell out when the time was right.
One company had devised a method of on line payment where your card number would not be passed over the net. It was a really good system.
The guy was offered e80 Million, he turned it down.
The market changed and his buyer moved to Pay Pal.
Problem was that the guy who turned down the money could not develop the product further, but he wanted to be in charge,he went bust instead.
Guess there is a time to sell and to buy.

An Irish girl working in Edinburgh Scotland really appreciated the warm weather of Dublin. Her emloyers are 2 guys in their 30s who started up an internet company a few years ago,now they are really rich.
They have property in South Africa and they are flying some of their staff to the property to work for charity. Did anyone ever hear of Nial Mellon he saw the conditions in the townships and he has done a lot to make a change.8 days to go before he heads over again. People like this should be our role models, not drug taking pop stars and models with pointless lives.
There will be more stuff soon as I get my head right.

Here is a thing I found on Roys Irish blog. Guided tour you download to your IPod,what a great free idea.

Or the great Dublin video shown on u tube
I would nearly go into town myself!

Here is something you might do if you have a bit of energy. Surf is up.
Some rush that!.

Then someone sent me this link
It think this is the best dash to the Sacre Coeur that anyone could do. Thanks to whoever sent it, this is a legend clip, people say he went to jail.

Then there was the guy who worked for pest control.
He learned that putting on Leonard Cohen music made the mice throw themselves on the traps.

Looks like the New York taxi strike is having little effect its easy to intimidate poorly educated people who do not understand they have a right to respect and a living wage.
This strike is about their folks at home.
The rich will get richer.
John at 8:49 AM