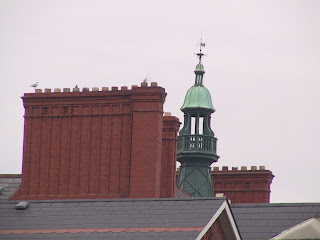 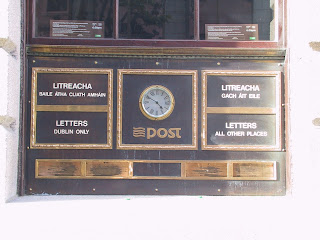 
On Wednesday I very nearly made the classic mistake.
I met an Asian girl who works in our local supermarket.
We met as I was coming up the stairs of a college, she was coming down.
She knew me instantly and the problem was that she was now(coming down the steps)taller than me and for a second I did not recognise her.

Then I nearly said "I didn't know you with your clothes on"
She is always dressed in a white shop coat.
What really threw me was that I never saw her hair before,it was always under a net and hat as she works in the Deli section of our supermarket..
She had just been in to do her computer exam and had an attack of nerves and had to leave early, I suppose the exam had become very important to her to pass, then the old nerves went.
I hope it worked out for her.

We had a little rain, which helps to lift business plus the fact that big boxes of toys are being brought home for Santa, he sends out his scouts to look for toys earlier every year.

I herd that of a guy who got into a taxi at the central bank and asked to go somewhere and the driver said "you show me the way,I don't know where that is, I have only been in Ireland for 3 weeks"
The guy was a Garda and gave him directions to the Garda station where he arrested him, driving without insurance, driving licence etc.

Some of the other stories going around are wild.
A taxi driver told me he was fined e60 and got 2 penalty points because he had one brake light not working. Another taxi driver in the court got fined and penalty points for doing a u turn.
While at the same court a youth caught driving a stolen car which he used to ram the Garda car causing thousands of euro in damage got a 3 month prison sentence suspended.
IE he walked out of the court laughing.

I suppose the Law and Justice are two different animals.

On Dawson St on Tuesday I saw a taxi at the rank with 4 bald tyres! Just the slightest trace of thread on the inside of each tyre.
I got such a shock that I did not note his number.
Startled is the word I am looking for.
I had a Garda from the drugs squad in the car the next day and told her what I had seen, she said that he should have been arrested on the spot and his car impounded. If that car was in a crash he would go to prison and loose his licence.
The insurance company would not pay out on his claim either.
There is no excuse for that kind of endangerment to the public.

I have been "resting" (as the actors say) for a while, but I have had all kinds of blood checks and a stress test on the heart and have had the all clear.
Soon it will be time to put the boot down and meet Christmas head on!

Here is a piece I picked up the other day.

Well if I was to wish for anything I would wish for a hot place for this guy.
Anyone who can exploit children like this deserves the worst kind of hell.

A West African man wanted in the Netherlands for allegedly trafficking children from Africa to Europe where they are used as prostitutes was further remanded in custody for three weeks when he appeared in the High Court today.

Peter Kwame Sarfo aka Jackson Smith (aged 38), is wanted by the Dutch authorities who claim he is involved in the movement of children from Nigeria into a number of different Western Europe nations.

It is alleged that the children were initially brought into the Netherlands and then sent on to other countries including Italy and Spain to work as prostitutes.


At an earlier remand hearing the court was told that after the charges contained in the warrant seeking his extradition were put to him he replied: "I know nothing about this. That is not what I am wanted for".

Mr Justice Patrick McCarthy adjourned the case to Wednesday, November 28 and further remanded Sarfo in custody until that date.

Well this is like manna to my soul.
How anyone can abuse children like this is the worst thing that can happen.