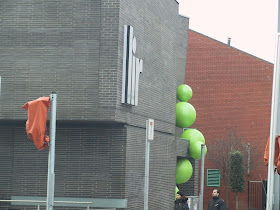 Lir, our college of the preforming arts. 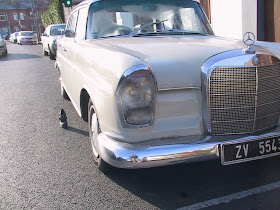 A fine vintage Merc with a ladys shoe abandoned beside it.. 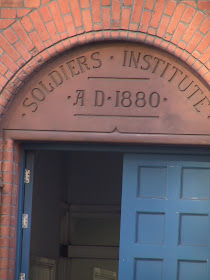 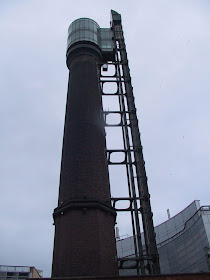 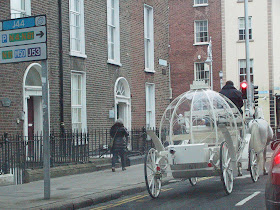 A Cinderella carriage for hire on your wedding day.


A paper was published for discussion last week.
Among the proposals was a ban on renting taxis, or making the renter be responsible for knowing who is driving his car.
Credit cards in all taxis.
Income tax cross checks to be made of drivers.

Then wonders will never cease.
A swift clamp down in Westmorland St caught 6 illegal taxis in less than an hour.

On Friday things were working out for me fer sure. For the previous three days I was not well but thanks to our government incentive scheme I was able to work for a few hours in the morning. Then home again and back to bed.

If you are self employed over here you get no benefit if you are off sick, so your incentive is to work or to starve.

I had come home when I got a phone call from an insurance assessor I know.
A fire on Camden St. Could you bring me over?
There is nothing like a fire to gather the trades together.

So when I dropped him off he told me he was going to call me for a run to Malahide later.
Both together cost €60.

When you look after your customers your business should look after itself.

Around 5.30 I was rattling down Pearse St when I saw 2 girls with cases. I turned off the roof light and they hopped in.
Some people will drop you a subtle hint that they are a bit odd !
For her destination she gave a "### Terrace" as her destination, no hint as to where it might be.
But just then her phone rang.
"What do you mean? You've arrived? I'm in the taxi!"
Well I got a broadside from her tongue, things like. "You knew we were booked and you swooped in in front of the other taxi to steal his fare!"
And a lot worse.
"I was driving along with my light on, you hailed me and I turned it off."
I will not go into it but to say that I told her that she could pay me now and get out, then ask the other taxi to drive along and pick them up. But that my entire fare would be little more than what is on the meter now.
(In most country's there is a minimum charge which covers the first kilometer)
I also told her that she should have asked if I was the "speedy Cabs taxi" we booked?
And also look to see if it had their company logos all over the taxi.

An Arctic silence descended for a while, then she started giving the other girl a guided tour of our fair city. She was a visitor from Portland the USA.

I spotted that she had forgotten St.Patricks Cathedral and our Huguenot heritage.
So we arrived and I was getting out of the taxi I was taking the bags from the boot.
There was €10.50 on the meter, she put €10 into my hand and said she had no more money.
Perhaps I should have asked her guest if she had any money as her host was leaving me short.

Well I do believe that you make your own luck, the person who is up above dishing out good fortune will not smile on her actions today.

Some people might have said say something like.
"I hope your bead and breakfast arrangements are in order tax wise?,
no one is above the law when the tax man calls"

Ah well for every toxic person you meet there will be 100 positive well behaved people.

A long time ago I had a nasty piece of work who refused to pay me when I brought him home past Sandymount, he called me names, but I had the doors locked. When the idiot made a swing at me I spun the car around and he was back outside the Card Club on Merrion Square again in double quick time.
He still refused to get out of the car and the rain was coming down in sheets.
I pulled over to the Natural history meusm (dead zoo)where a garda came over.
He listned to us both, then told him to pay £6, I had only asked for £5.
Then he told him to get out of the taxi and if he could get another one he was to behave himself and pay to pay up when requested. I blew into the base at Metro via radio and told the dispatcher that the fare had refused to pay and tried to assault me. "Thanks for that 86, he's barred again"

You have to respect yourself a bit and not take bad manners.
This was the best advice I ever got from a customer one day.
"You respect your customers and are polite to them.
Accept nothing less from them"

I stopped the tsxi on 3 occasions to vacate the seats since then.
It works wonders, a big wake up call for some ignorant people who think that they can go through life bullying people.


I must be slipping about not noticeing that places are closing down all over the city.
William Searsons pub on Baggott St has closed..Then I was told that it closed before Christmas
Next thing was that I was told that the rent was too dear €8,000 per week !
You would have to serve a good few pints before you could pay for stock staff and other costs before you could show €8000 clear profit to pay the rent.

As establishments go this one was run in a "tricky" manner.

The prices crept up all night long. The tills were programmed to change every hour, you could be paying 80% extra at midnight on the price you paid at mid day.
It was being run as part of the Thomas Reid group who are in rapid decline.
For any pub to survive like they were trading the economy has to be out of control for them to survive.
Take the chain Wetherspoons in the UK for contrast. Cheap food cheap beer and a good standard of pub.
I know he buys food and beer with a short shelf life, but then again it is not long in stock until it is sold on.
We are all counting the pennies now for sure.
John at 10:36 PM