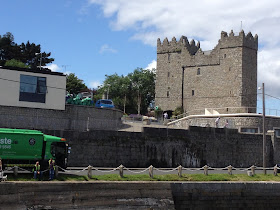 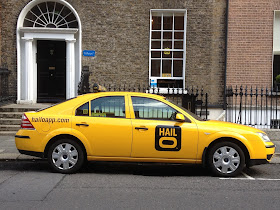 Well things are progressing towards a HalO launch next week more than 400 drivers signed up.
I went to the HQ on uppr.Mount St, but before I walked to the door I was aproached by a man who wanted to go to Dalkey.

Dalkey is one of the most beautiful places in the world, when the sun is shining.
He was a good talker and told me about his father who ran a brakers yard, an awful bad business man, but he brought them up well and they always had interesting cars at the house.
When he got out I went up Vico Rd to take in the view. Bono of U2 fame has a house around here. Indeed when Queen Victoria was brought there she declared that "It is as beautiful as Serento in Italy" Hence you have Victoria rd and Sorento Rd.

It is indeed where the rich and powerful live.

At the train station there is a good photographer, if I had dropped off in Dalkey I would go and look at their latest creations. At the present time a good money spinner is getting your pet to sit for a portrait.
A few months ago I spoke to Margret about a photo they had once taken. "You have a great memory, that was over 20 years ago, it won a lot of prizes that photo. I am very happy that you still remember it"


I was in need of a quick pee one day up there and I saw a driveway gate open and a gardner at work. I asked his permission to go behind the wall.
When my work was finished I thanked him and I spoke to him about the grandness of the whole place.
He told me that the people who owned the house he was working on were in the south of France at present, at one of their other houses and their 14 year old daughter had skipped out of her boarding school and was hard at it in the upstairs bedroom as we spoke.
On he went with the scandal about one household after another, he hardly stopped for breath until he had told me all the bad things about the 6 houses around me.

If I was working for the Sun I would have had the scoop of the year.

20 or so years ago I was driving a "Delivery boy" around as he went from one house to the other. Back in the days of the old Motorolla brick sized phones.

He explained it away by saying that he was just fulfilling a demand, he didn't force them to buy the drugs, it was just business, he fulfilled a demand.
There was a drugs haul in the paper a few days ago of €250 million worth of Cocaine.
They say that the drugs were in transit.
I reckon that most of it was for local consumption.

The drugs problem is way out of control here.

I have a new job for life.

All I have to do is to work out why young healthy people go on drugs and dstroy their lives.
My sponsor has promised me a worldwide lecture tour plus full network coverage.

The problem is that even the very best brains cannot unpick that puzzle.
So don't beat yourself up worrying about it, observe it all and tell others was his advice.

I would to fill you in about where I find work and more about the people I meet.
But it would be like telling other fishermen your favourate fishing places.


School ended today for the primary schools,
All the little dears heading into school with a present fot the teacher.
John at 2:08 PM