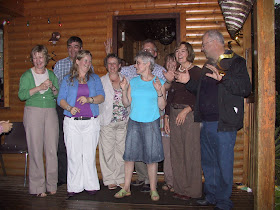 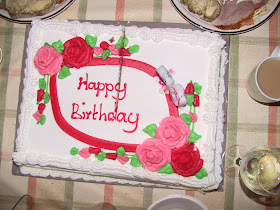 Just back from Cavan after a big family get together.
A surprise 60 th birthday party for my cousin.

Her son and wife flew in under cover of darkness from New Zealand while other folk came in from Belgium, Scotland, Hull in the UK, Derry, Belfast, Cork, Donegal and other far flung places.
After the initial greeting we all remarked that we really should get together more often, not just for funerals or weddings.
I had a good few sessions of "Do you remember me?" I was lucky in that most people I did recognize.I was shocked to meet a widow of a school friend, I had not heard of his death, then she told me that her husbands brother was also dead. When I close my eyes I can picture them perfectly, young guys, Richie and Gilbert Small RIP.
We are now the senior generation as all of our parents are gone, on our journeys through life some have fared better than others,(through luck more than judgment) a good few of us have battled with personal tragedies and bad health, divorce and deaths. One cousin who was looking great lost her husband when he was mowed down by a taxi while he walked home, 24 Nov. A month before Christmas day, a great bunch of kids left behind.
Spoke to the cousin from New Zealand who told me that a guy in Wellington told him to have a look at the blog he reads written by a guy in Dublin, guess what? It was this one, so it is a small world.

Some interesting views from the assembled family on the sudden change in economic climate. "Wait another 6 months until things turn really nasty, there are a lot of homes to be repossessed"
This thought stayed with me.

We have all aged but you know they are all great people even though they are Kin.
I saw digital cameras lying on tables, handbags unattended and no one was stealing anything. That is the taxi driver in me, when anything that is not nailed down gets taken.I even drove off without my video camera but we are arranging a handover as I write The old town where I grew has changed so much that it is safe to say that it is gone.
One thing I regret is that when my Mother moved house someone took a big box of family photographs, going back to the stone age, of interest to no one else,I suppose the memories are in my head, just a pity I can not show them to my family.

One other conversation I had with Mary Clarke who lives now in Gort.
We spoke about the influx of Brazilians into the town of Gort.
It started with a few, then a trickle then a flood as things are bad in Brazil.
Signs in the shops were in Portuguese and English.
What a change from the Ireland I grew up in.
She told me they were lovely people and got on really well with everyone, playing football and GAA games. The best hurler in the locality is Brazilian.
Some others came and could not find work and started breaking into houses.
Guess what? The resident Brazilians caught them and handed them over for deportation.
Now in recession hit Gort the work has dried up and they are going home, with a heavy heart on both sides they will be sadly missed by everyone.
It was the most positive story I heard about migrants into Ireland for a long time.

My oldest son lost his job while I was on holiday, he did computer science and it seems that every company he gets a job with folds, he has skills and is designing a few websites and he is going to build me a new computer, I must find a way for him to promote himself in a better way, he needs a "Life Coach".
Ah you know kids, you can tell them nothing!

My cousin told me that this generation will never be able to get a loan because there is no more "Steady" jobs, they cannot prove a steady income, that is true. 15 years with the same company is a thing of the past.."Then I made the biggest mistake of my life,I bought a TAXI!"

On the taxi front, it takes a few weeks to get back into the work, Last week we had Rod Stewart doing a few dates, picked up a guy from near Sheffield,came for the concert paid top dollar for good tickets. He stood up and moved down to get a photo and was pounced on by security, they then pushed him to the ground and dragged him out of the arena. There was loads of other people taking photos,they just picked on me because I was Asian,(Probably didn't help) We were locked in for a while and when I got them back to the hotel i gave them e2.50 off the fare. "Best forget it mate"was all the advice I could offer.
Later on I got 2 guys going to the Red Cow hotel and half way there one of the guys gets sick down the inside and outside of the door.Its no use saying to a guy who could kill you with one hand that he has to pay you *** euro life is not like that all I got was e20 extra and an early night, scrubbing and disinfectant the next day and after a few hours the smell was all gone.
The Boss Bruice Springstein delivered delivered the goods this weekend. I went down on Sunday to see if they had any tickets over but they were all gone. I was able to listen to 5 or 6 numbers from across the road.(there is something about a stolen apple being sweeter)

He re defines "old man", I am younger. 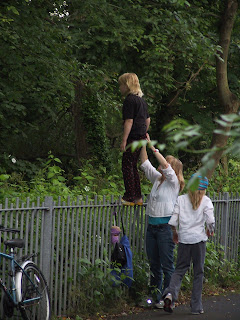 Just a peek at The Boss

Junior came back home from Oxygen minus new rucksack and Ipod but safe.

A girl in the taxi told me about the garda arresting this guy. Protesting in a loud voice Im doin nothing wrong why me? The garda said its just about that bag of Cocaine in your hand its not personal at all.

Before I end I would just like you to say a short prayer to your God for the safe return of the Goal aid workers in Darfur, Sharon Cummins from Clontarf and Hilda Kawuki from Uganda who were kidnapped by and armed gang and led away last week.
If a ransom is paid no aid worker will be safe and if no Ransom is paid.........

Either way it will spell dissaster for people trying to live in the reagon,
John at 7:07 PM