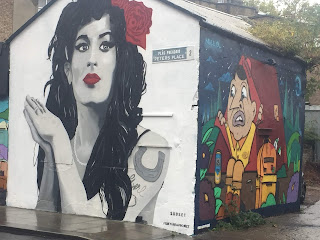 Driver we are late!
So they are putting the pressure back on to you.

What do you do?
So the call was to Clontarf Castle hotel and they were off to Dundrum for a funeral.
"We are very late"
I started the meter and then had to explain how the charges were mounted up on the meter.
So I headed for the East Link bridge letting the sat nav take over and at points in the journey I was doing over 70 kph.
We arrived at the church in Dundrum before the hearse arrived.
So she handed me a €50 and then took all her change!

Even a thank you would have been nice. Some people !

Then I realized that I hadn't put on the €1.40 for the toll bridge.

So I crossed back over the city and got a job in Clontarf with a doctor from Soudan going to Beaumount hospital, God she had a wonderful manner and was so polite.
I think I am in love again.
Its a pity I am not 50 years younger or at least as rich as Trump.

Often I think that some people are not people at all

The way people drive is making me mad.
I saw a car have a blowout on the M1 in front of us the other day. he did 360o spin then another 90o and hit the dividing barrier, then yesterday coming back down a police car passed me sirens blaring, then he braked blocking off the fast lane of the motorway.
I turned on my hazard warning lights and then an asshole tried to overtake me on the inside.
He did not know if there were people standing or lying on the road. So I sat on the horn and cut across him until we had passed a 3 car pile up.
He was on my inside and could not even see the crashed cars.

The keyless car system ?
You walk to the car with the key in your pocket, put your hand on the handle and the car unlocks, then you press a button and then simply drive off Danger!
The signal can be picked up and cloned with a Car Relay Attack Unit.
They pick up the radio signal and then drive off and thieves are having a field day!
So what do I do John?
When you stop your car. Put the key fob into a RF blocker pouch which you can buy from Amazon.
You get out of the car and put on a steering wheel lock which can also be used as a weapon of last resort.
Also from Amazon
Then you step out of the car and press lock on the door handle.
Holding the handle out you close the door.
Now the car is locked without the key signal escaping.

On the Times of London newspaper there is a story of a guy who had his car stolen.
He reported it to the police and they uncovered loads of stolen cars..in his possession worth as much as £800,000 All keyless entry high end cars.
I bet he wishes he had kept his mouth shut.