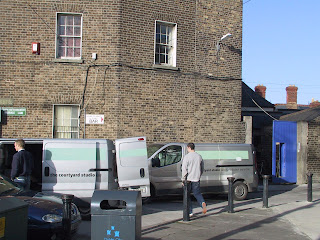 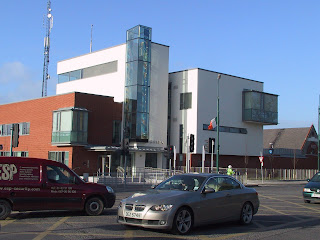 The new Irishtown Garda station, wait till you see the one in Ballymun.

Well another week done and tomorrow is the day of the MARCH to the regulators office. It starts at 8.30 which I think is a bit early for our representatives who are much more used to getting in around 10.30 and home by 4pm.

Well a week of ups and downs..The biggest downer must be the case of the lady who was coming to Holles St hospital for an emergency procedure.
The ambulance asked for a Garda motorcycle escort for when they reached the City.
"Sorry no one available" came the reply.
The ambulance got stuck in traffic and the baby had to be delivered by the paramedics near Lucan.

Sad to say the baby died.

Every day it seems to me that motorcycle escorts are bringing criminals up and down to Portlaoise prison (where we keep our "Special" criminals).
One would not want to deny them justice.
John Gilligan has been fighting to retain his assets which he got from importing tons of heroin over the years.
One reason I did hear was that the Garda were providing an escort to our president who was going up to Northern Ireland.

Someone somewhere should have had the power to get an army escort to come out. It is likely that emergency phones are now manned by civilians who are not paid to think things through,I hope this will change before the next time.

I put in the photo of the guys loading vans with video and film gear.

Years ago when I worked with Metro cabs I had a collection of clothes from RTE to there for a film shoot. When I delivered they said that the person who was to pay was not there, would I call back later? I called back around 4 times. Later on when calling back yet again I was told that that film company had closed and there was no one to pay me. In spite of the same people being present.
A few months later I was asked to collect clothes from the Abbey theater wardrobe dept and RTE for some more and bring them over to Irishtown.
I parked the car around the corner and went in for my money. "Just drop the clothes over there". Once bitten twice shy as they say. "I must get paid for the last run and this run now,in cash".
There was a lot of coming and going and I know they looked for the car outside, "The meter is running, every minute I stand here the more it is costing you" I said.
Pretty soon they saw sense, money change hands and soon it was Lights, Camera.....Action".
Actors,extras and others often get short changed by film companies,it is a very much hit and miss business to work with them.
Talking of Filming,I had a lady in the car going to RTE (our National broadcaster) She had spent the previous 2 years making a natural wildlife program for them. The weather was so bad it delayed things all the way. Now there are cut backs and she knew there would be no more commissions for her. They will be avoiding me or lying through their teeth all the time I am there, she said.
Strange thing is that she is in an area where there is no broadband, so her business suffers as a result.
They should introduce a policy where they roll out broadband nationwide,the denser populated areas subsadising the more remote areas.
On Friday i picked up a girl with a case going to John Rogerson's quay, I cut down by Clanbrassal St and down by Christchurch, when the traffic slowed she got a bit narky and started on about"going the wrong way". You have to bight you tongue but I just said if she had any suggestions I was open to listening to her.Silence.
On arrival I told her the price and knocked off 2 euro for the inconvenience.
She walked off without a thank you.
I was 20 yards from her office when her mobile phone rang from the back seat.

Now she was off to London for the weekend and the loss of that phone would have really upset her plans.

Revenge belongs to the Lord.

I dropped the phone into reception and told the girl to answer the phone when it rang again,find the owners name and to call her down from her office.

On the subject of mobile phones, they are cheap to replace what is not cheap is replacing all your numbers. Go to the website of you phone company and register. Then go to the My phone book section and type in all your contacts.
When you loose your phone. Chances are you will too.
Just go back to the web site and you can download your phone book.
You do know that there is free web text? So a good joke can be send out to all your mates in a few seconds. (o2 300 free texts per month)

On the old streets I messed up badly last night, I went out around 8.30 and drove around until 9.30 without getting anything. One girl flagged me down at the crossroads in Kimmage.
I flashed her,she waved back and while I was waiting for the lights to change a car on my right cut across the traffic and picked her up.
Its dog eat dog on the streets.
I was so annoyed I went home and then off to my local pub to support my local publican. I only had the pint finished when someone asked me what I thought of the match and fireworks display?

Well as they say "If it was raining soup I would be out there with a fork"
I went to bed and slept very well I am tired of work.

The GAA are celebrating 125 years-, they have a good web site look here

When I worked in the international telephone exchange there was a call that used to come in from New York every Sunday evening. It was to a small rural exchange with a 2 digit number,"New York calling. Operator I have a call to Kingscourt 86, could this be right?" The rural exchanges had plug in jacks and handles to twist to ring the number..Sometimes the rural operator would know that "Mary is at devotions and won't be back before 7 provided she meets no one"
Anyhow the story I was going to tell was how when the call got through, news was passed about scandal from both sides of the Atlantic. Then "Here she's coming"
At that point you could hear the excitement grow as the phone in NY was out on to speaker and the sports results were relayed via the telephone to the assembled people in the New York bar with cheers and whistles.
Then the line from America would drop off with the final round up.

Now the games are streamed live via the internet and cable.

I hope we are happier now than we were then.

Just in on the wire..

Trade union SIPTU said unlike other groups in the workforce, taxi drivers have no method of airing their grievances.

Up to 30 drivers will demonstrate from 7am to 11am at one of the roundabouts outside the airport.

SIPTU branch organiser Jerry Brennan claimed no cars would be used in the protest and they would not be disrupting airport services.

"We apologise for any inconvenience our campaign may cause tomorrow but we have no option open to us if we are to protect members' rights and livelihoods," Mr Brennan said.

The union has been lobbying officials at the Department of Transport to introduce an appeals process and had postponed the protest for three weeks after contact with the all-party Oireachtas Transport committee.

Mr Brennan added: "While we welcome the interest of the Committee it appears that there will be no change in Government policy.

"This leaves our members in the position that, unlike other workers, they have no access to the Rights Commissioner Service, the Labour Relations Commission or the Labour Court."

"We are seeking an independent appeals board that will be able to hear appeals from decisions of the Regulator."

SIPTU members voted 98% in favour of the action during a series of ballots before Christmas.
Posted by John at 6:28 AM