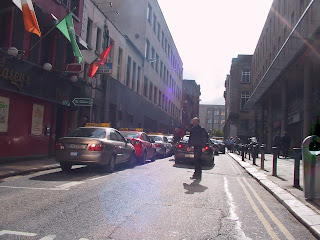 A taxi driver looks for "Last car" in the snake pit that Sackville place has become. 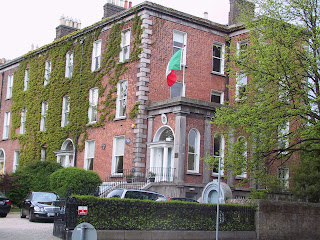 This beautiful house is the Mexican embassey. 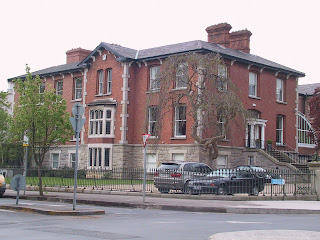 Also on Raglin Rd, what a house!


Just doing a quick burst before going out on the all nighter.

I have been making a mess of things lately, working all day and then trying to work all night as well. This kind of thing will end in tears or in death for me or my passengers or other road users, worst case scenario all three.

I did hear a rumour that the Garda have been pulling in taxis and checking the papers, the result is that 183 taxis have been taken off the road for one thing or another. But we are not informed of whats going on at all.But you know if one person sees something and makes 2 phone calls and that person makes a few calls the rest of the illegals are off the streets in a few minutes.

Still if in fact it did happen its a start.

Lights out of order the other day at South Circular rd. and Counningham Rd resulted in a tailback of several miles, one garda in 20 mins. could have eased things.
Who is in charge ? No one.

I have put in the Mexican embassy for you, what a beautiful building.
What do you think about he flap over the "swine flu". Perhaps In one respect they have a point, restricting travel and watching people coming back would help.
Do you know 100 times more people have died through driving accidents since the outbreak than have died from this flu.
The "Spanish Flu" after the first World War killed more people than the war did, then people had poor means of communication at that time.
Taxi drivers and people constantly meeting others in confined spaces are most at risk. Did you ever get someone sneezing on the money? and then they hand you this saliva sodden mess.....You have to count it,give change and then find a spot to clean everything up....There are toilet wipes with bleach which you can get, then clean off with baby wipes.Don't ever rub your eye with Bleach on your hand.

Anyhow I had this girl in the car from Mexico, turns out her husband works for Cemex the Mexican cement company who took over Readymix its Irish rival.
This Mexican girl was very petite and looked like a 15 year old herself.

Great program on the telly on Tuesday about Chuck Feeney,
(he is the one passenger who impressed me most)
He it might be said forced the Irish government to invest in education, which built the road to the success which we have enjoyed over the last 10 years.He gave away Billions of Dollars through his Atlantic Philanthropies and it is through his example that Warren Buffett and Bill Gates are doing the same.
I will do another posting about him.

But if I had won the Euromillions the other day I would have turned to him for advice. The main thing about money is to keep it quiet. Flash cars and houses would soon attract the wrong kind of person. I can go to work without fear that I or my family will not be held to ransom.

CountJohn McCormicks portrait has been bought by the state. John McCormack was in the loop with Caruso and Pavarotti,,,all time great singers.

Driving back into town on the Rock road after Booterstown Ave there is a red brick house on the left which was owned by him,It has a cone shaped roof on one side.
In his will he gave this house to the "Poor of Dublin". Another Irish person with a big heart.

If them bloody politicians would only cop themselves on, I was getting the dinner ready when there was a knock on the door. I dried my hands and went to open it only to see an election leaflet on the ground and the helper walking on to the road. I ran out "What the feck are you banging on my door for and running away "Cllr Naoise O'Muiri walking down the other side of the road thinking he is someone special.

They annoy me so much,I honestly know hardly any of the people going for election.

Not that it matters I will not be robbing many people with my "Fountain Pen", so therefore I will not need them.
But I would like them to wake up and do some real work.
Posted by John at 3:00 PM