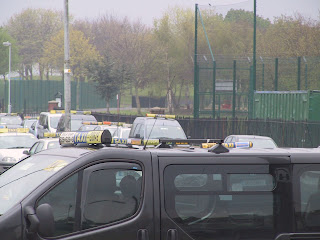 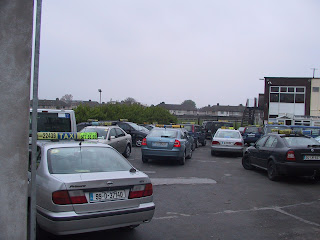 Empty taxis outside the meeting, they were everywhere

Its 11.30 and its bedtime, but I thought I would start the next posting now, just to have a bit done.
The taxi drivers for change had a meeting today.

One lady got up and said it all.
"My husband works 18 hours a day, he is defeated when he comes home, totally wrecked. We have no life. If the car breaks down I have to find the money to fix it, if a bill comes in there is no surplus,I keep the house working, we live hand to mouth.
We are both working and the ends do not meet.

Its wrong that you come here and argue about small things.
Stop this fighting against each other.
Stand together and fight together, we all want the same thing"

Fair play to all of them after the meeting they went into the office, sorry palace of the regulator and created a presence, a presence that has not been felt by taxi workers in that building before.

You know we often feel that everything is beyond us.

That we are helpless.

That this is something that is out of our reach, but we all have family,kids and relations and in my own household there is as many as 18 votes,replicate this through the country and our elected representatives who ignore us do so at their peril.

Together we can do great things.

Many of the bad things in the world are beyond our help.
The bankers who gave gazillion of Euro to property developers.
The Government now feel that we the tax payer should bail out the banks, even though we can't pay the back over inflated mortgages that the crazy spiral created in the first place.

Pay up or be homeless.

Bail out the banks.

It would take very little to give the public drivers who know how to get around the city.
Drivers who have had their past checked out by the Garda.
I hope you have no young kids.

Drivers who do not have to work 60+ hours a week.

You know its time to stand up and be counted, shoulder to shoulder we will make a change.
Posted by John at 4:20 PM