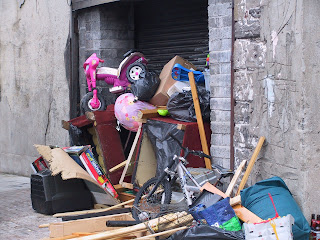 The rubbish piled up outside a garage door may not mean much, but this is what you see when a tenant moves out.

Home owner evicted by the banks?

Social change is everywhere. That TV probably works, but its not a flat screen plasma job, so no one wants it. The bike could be fixed up too.

The banks and building societies are bullying people who are behind with their payments. Just a few months behind in payments and the bullying begins. When they turf you out on the roadside and they sell your house at a substantial loss, you will still have to pay all the money outstanding to them plus their costs.
The bankers have paid themselves well, huge pensions and bonuses at a time when they were ruining the financial sector.

Yet their action are going unchecked.

The banks have received huge bundles of cash, but they are not lending to anyone which makes the decline worse. 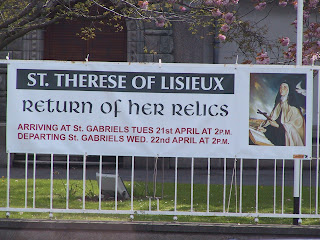 Perhaps the people will be turning to religion?
Well the relics of St.Threse of Liseaux have come to our local church and people are flocking there. There is a caravan stocked up with holy pictures, rosary beads, and Red Roses.
Business is booming.
Its good to see that people believe in something other than the mighty Euro.
The last time I saw such interest in religious artifacts was when the statues started to move in Ballinspittle many moons ago.
Times were hard then.
It was a kind of mass hysteria, but it did no harm to anyone.

Some gurrier from Ballyfermott went down with a hammer and smashed the statues to pieces,he said it was against Catholic religion to worship statues.

That put an end to that.

In the time of the troubles the IRA were finding it hard to move around Templemore and it is alleged that a statue of Jesus started to bleed real blood....Suddenly sick people were healed and pilgrims started to converge on the town form all over. The police could no longer look for the IRA suspects, instead they had to police the hordes of people.I read an account by someone who was around at the time and he said.
"It was a great thing to see the look of hope on desperate faces, children who had been given no hope were brought by desperate parents, I felt so bad knowing it was a cynical plot to distract us from out duty, that in reality there was no hope there, TB,Polio and other diseases were rampant in Ireland then. It was an awful cheat on peoples trust"

Its hard to understand but if you are dying you will reach for a relic for that special blessing.
I went to south west France once and used Lourdes as a base, cheap hotels good air links to Dublin. The procession of the sick and dying to the Grotto in the morning would soften a heart of stone. The dying children were the hardest on the mind.
But the look of devotion on the faces of the nuns and nurses was something to see, they did believe.I know all religions have places of pilgrimage, Mecca etc

and McDonalds for the heathens.


Just 4 weeks in the school year.


As they say "I used to be an agnostic, Now I just don't know"

The following are protests planned for the coming weeks:

Drive protest from 15.00 until 16.30 start point at Merrion Sq west (Government buildings) to follow a route up Merrion St, Ely place, St Stephens green, Dawson St, Nassau St, Leinster St, Clare St and Merrion Sq. All cars to be available for hire on this route for the period of protest.

Saturday 9th of May

Wives , Partners and Families protest walk. Start from Parnell sq at 12.00 ends at 14.00 at Molesworth St. Speakers will include wives, partners and families. Time to let our families vent their frustrations at this Government and its Minister's arrogance.

The next protest will include a Saturday night protest to let the Government employees working in the industry know that we're not forgetting about them. This will be in mid May (date to be confirmed).

Towards the end of May we will be organising a trip to Trim to emphasise our unhappiness with Mr Dempsey and to let his constituents know how unhappy we are. (Time and date to be confirmed).

REVIEW AND RESTRUCTURE THE INDUSTRY

A fund has been set up to pay for anyone's car being clamped or towed away. It costs 20 euro if you wish to join up just contact a committee member.
Posted by John at 11:31 AM