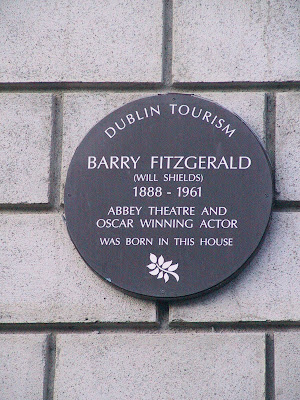 Now if you are older than me you would know who this guy was. 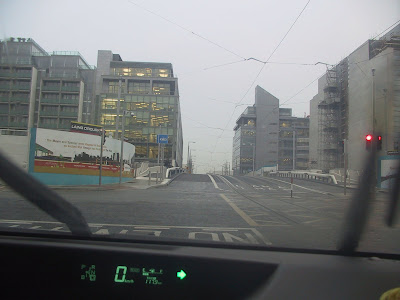 This is where the Luas goes to and from the point. 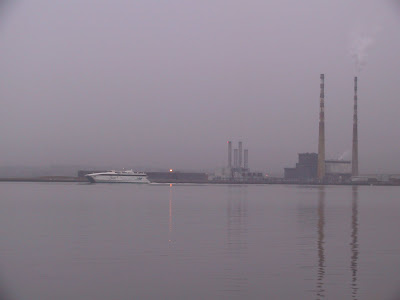 The sea was as calm as glass when I took this photo of the "Jonathan Swift" headed out to sea. I had brought a couple with their small son who were from Switzerland out to the Bull Wall, she had a splint on her leg. She said "Hey take a photo of me instead", taking a pose with her backside sticking out....funny gal.


Well the old shopping has taken off and so has business. Not to the same extent as when there was only 3,000 taxis in Dublin, still I am grateful for what I can get.

I had an Irish celeb in the car today Eamonn Dunphy!
He has now given up the drink and he was very a pleasant chap to talk to.
The X footballer,He used to have a good chat show on the radio where he spoke with celebrities, I enjoyed that show and I listened to many of them on podcast.
I just had a look(www.rte.ie) on the net and couldn't find them.


Until I mentioned the taxi regulator.

He got very angry about the suituation.

He really understands what has happened and speaks of the utter disgrace and a sham the industry has become.
Whether it is a plan to take thousands off the dole or to raise millions in revenue he is not sure but many many taxi drivers are going under as they struggle to find the next passenger.
All the regulator had to do was to say that until there is more taxi rank spaces there will be no more new taxis.

Then she says she has no power!!

One of our number was stopped on a loading bay the other day while the car in front changed a flat tyre. A Garda told him to move or he would get a ticket. The taxi driver told the garda to catch a real criminal......The result a e30 fine and a quick trip to the taxi regulators office where he got a e250 fine..
Above all you must hold your tounge and grovel.

These €250 fines are way out of line in proportion to the crime and I as well as every other taxi driver risk getting a fine at least 6 times a day, I have been lucky so far (Touch wood)

One other thing which seems to have backfired is the advertisments for the Samiratins and Aware. It was a good idea but to ask the driver to donate €33 and then carry the stickers was a bad idea, taxi drivers are strapped for cash now. If it was €5 they might have got thousands to carry them, as it is I have only seen 3 cars with them.

I had a lady in the car today who has just had a premature baby 8 weeks early, tiny as your hand he struggled to live for a while but is now starting to grow, she feels that he will make it now though he won't be home for Christmas.

Remember the good old days of taxi sharing?
Our New York cousins are trying it.
Thanks to Gil.