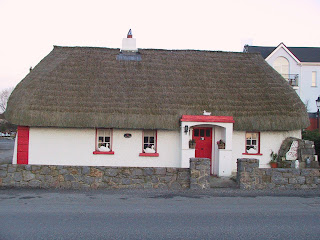 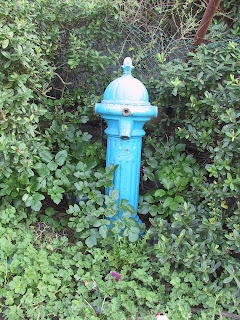 click on the thatched cottage to make it bigger, now look at the date stone on the right side. Now thats an old cottage.
The big day is on the 17th and it is celebrated all over the world.
And where better to go to than Montsarat a tiny island in the west indies which boasted a large population of black Irish(desended from Irish slaves and sailors who jumped ship) they used to have a great parade until a volcano blew the bloody place up, I met a black girl from there once her hame was O'Malley and her eyes were a vivid blue, in her black face they were very striking.
It was some kind of paradise.Their flag even has a harp on it.
Statues of St.Patrick were in every house. Some say that the statue was really to represent a vodoo god who had power over snakes.

The parade and fireworks and the big open air dance and so what if its not sunny the whole world will be there.(www.stpatricksfestival.ie)The link did not work.

Rio Comes to Dublin.
Last year in the icy wind we had a bikini clad dancer in near blizzard conditions, She was frozen. But our local firemen knew just how to warm her up.
But the holy nuns had better ideas and she is now sister Juliana. (I joke)

Australia are having their big day on the 11 th, they didn't want it to clash with the Sydney harbour bridge celebrations. 100 years open?

St.Patricks day used to be a "dry" day with no pubs open.

So with the fireworks, the parade. the ceili mor (open air Irish dancing)and the dog show.
It will be a big weekend.
Look out for the Estonians,Latvians,Lithuanians,Belarus,Ukrane,Russians,Moldovans,Polish,Checks.Slovakians,Hungarians not to mention the beautiful girls from Slovenia and Croatia.There are hundreds of people from Brazil and Nigeria here as well.

Bring a raincoat your wooley vest and a stepladder to see the parade.