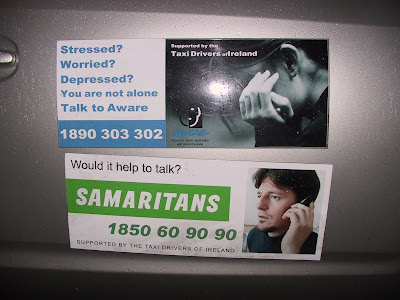 The poor girl who went missing before Christmas has still not been found.
The taxi driver who picked her up on that night has come forward, he was on holiday.
The taxi dropped her off on harbour rd. in Howth.

From what I hear there was a lot of negative things going on in her life.
The coded messages are coming through on the radio.
"No fowl play is suspected in the disappearance".
"Sub aqua divers are searching the harbour area"
Other stories about loosing her job etc.

So once again we loose a good person. Perhaps if we can learn something from it all.

A kind word, some encouragement, a quick call.

I once suffered from deep depression, I thought I had a bad flu. My doctor sent me to a psychiatrist who put me on Lithium, he said I had a chemical imbalance in my system. I feel fine all the time now. But who knows what is going on in other peoples lives.

Remember one factor in mental illness is that the person in not able to reach out to others for help.

Years ago I picked up a guy who topped himself just after getting out of my car.

An American guy, he had lost his job and had wandered off and became lost, I wasn't driving a taxi at the time, but he told me how he had been sacked from his job. All the advice I could offer was to talk to a solicitor as the actions seemed a bit over the top and there was no real procedure followed. Anyhow perhaps I should have brought him home for a cup of tea. But you can't turn the clock back.

Years later I approached the Samaritans with a plan to put business cards into every taxi, the driver could pop one into a clients hand if they felt the need.
Also there was stickers for the backs of cars.
The printed them in green and white, they were hard to read too. But few of the drivers took up the offer to carry them.

The bigger banners were a great idea, but asking the drivers to pay e30 to display was a bit off the wall.
Though for myself if it saves a life it is a small cost.

There is no easy solution to approaching mental health.

Much wiser people than you and me have tried to understand.

But be careful a kind word will never go amiss.

It is strange that a few days before Blathnaid went missing I gave out the same message.

Just to finish on a more up beat note.
There is a new jobs fair coming to Dublin. The idea is on up skilling and changing direction in your career. Go and take a look.
Posted by John at 11:54 AM