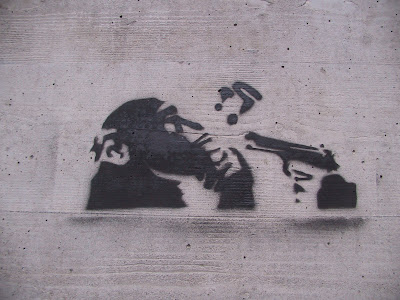 Don't move or the monkey gets it ! 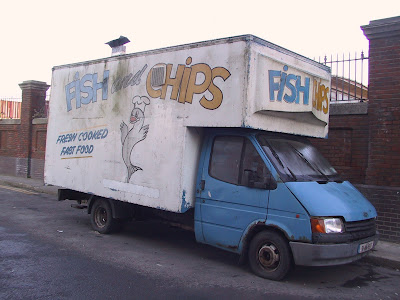 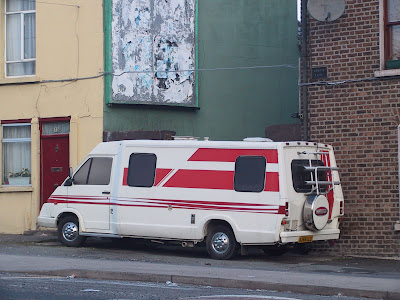 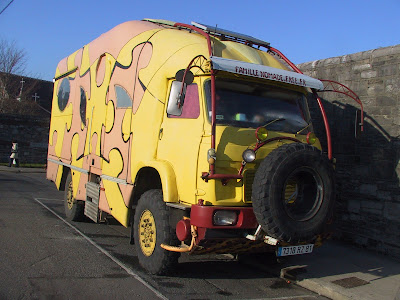 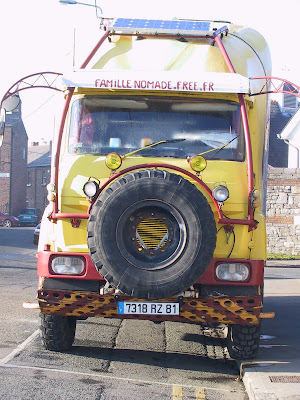 And what do you think of this big truck parked up in Arbour hill for a good few days?.
If you want to learn more click here.Six people inside ! touring the world.

Whats going on.
Going home on Friday a guy in a van stopped me.
"How do I get from here to the Mansion House in Dawson St?"
We were at Christchurch Cathedral and he knew none of the landmarks at all.
So I said if he wanted me to I would drive in front of him and bring him there.
He agreed and we set off Right down Werberg St down to Kevin St. across Cuffe St and on to St.Stephens Green where I stopped to be paid. "What do you mean? I have no money, I thought you were doing it out of the goodness of your heart".
No matter what I said I was not going to be paid.
He never would have made it himself as he was going to try and get through the bus lanes around College Green.
Well I must be stupid not playing hard ball with him, I hope he will not make me say to the next guy who hasn't a clue where he is going.
"Here's a map figure it out for yourself"
On the other hand, that is not me.
I should have called the Garda over from the department of foreign to affairs to arbitrate on my behalf. After all €6 and the time wasted is too much to loose without a fight.

So on the other hand I did have a victory. I was clamped!
No matter what I said to the private clamper became more belligerent and refused to budge.
After paying him €90 I went to the Garda with photographs a photocopy of the receipt and notes. Which included.
Private clamping company operating in a public place.
Company not registered in the companies office.
No VAT (tax) number on receipt.

After 2 weeks of no response I wrote to Dublin Corporation who informed me that their "Loading bay" is illegal and they have put them under notice to remove the said lines.
They also informed me that if I am not repaid my money I should prosecute them through the small claims court. In that case I would recover all relevant costs as well.

A second victory came to the taxi driver group who were bringing the taxi regulator to court in regard to the manner in which she is conducting her business.
It seems the courts think she has a case to answer and has 4 weeks to prepare for her day in court.

3 things that are great sours of anxt for me are.

If there are only so many fish in the sea you cannot keep issuing fishing permits.
If the ports are jammed with trawlers and people are being fined because they cannot find a berth, you have to reduce the numbers.

No matter what requests I make to her office I never get a reply that makes sense.

One guy who used to drive past the taxi rank at Heuston station and approach people coming out of the station door. I took a passing er off him one day and explained to her that she should be careful of people like him. His attack was pretty vicious, though verbal. Around an hour later I stopped him again where he threatened to kill me and burn my taxi with me in it!.

So I reported him to the regulator, then again, then on the 4th time she told me that he "Seems to know when the inspectors are coming and he goes away. But that I should report him to the garda myself"
Seems like a to me "I will not make an effort, you do for me and put yourself in danger"

My other BIG GRIPE is with regard to illegal drivers. There are advertisements in the evening paper "Taxi to rent" So a guy rents the taxi and he drives it away then his gang takes it in turn to drive it. They have one ID for them all.
No one knows who they are or where they came from.
Imagine getting into a taxi with an uninsured driver who doesn't know where he is or where he is going? When you add to that that he has never been vetted by the garda as well. Every week I hear horror stories about "illegals"
If the regulators officers appear at the station they just drive away. Why not place a Garda checkpoint around the corner? It is the drivers who pull off the rank you need to talk to, not the ones who remain on the rank.

So perhaps the courts might say she is not doing her job properly,who knows.

Though I think that incompetence is not against the law.

Perhaps I think I am becoming more like Larry David