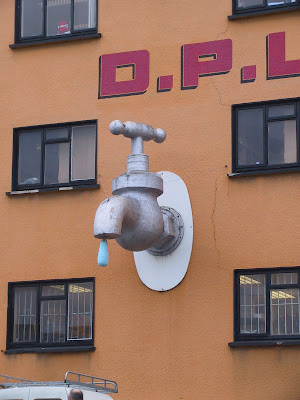 I hope he is jam min with Philo in heaven as you are reading this.

That will be quite a gig.

Go on take out that old air guitar.

We had very strong wind over the weekend. Gusting and twisting.
A lady on Wellington Rd was killed by a branch from a falling tree.
People walk around all the time talking on mobile phones and listening to music, as a result they have little chance of hearing that cracking sound that gives you a split second of an instant of warning as to the danger.
I don't for a moment say that she was not being attentive.
I enclose a photo of one of the trees near by, I reckon a tree surgeon is needed to top and thin this lot. 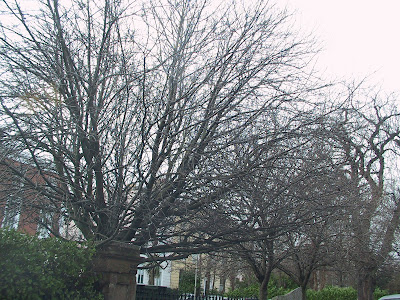 Kudos to the Dublin taxi driver Karl O'Neil who sprung into action and saved a baby's life. The crowd of people were surrounding a woman with a child. When he found that the baby had stopped breathing he loaded them into the taxi and headed to the Rotunda hospital shouting "blow into the baby's mouth" as he drove.

Nothing so exciting for me.

But she is much much much better live, what a show, what a strong wild voice,she never once lost her Minnelli American accent.

Today I found out that not only have all bus fares gone up 5 cent but the number of buses have been reduced as well. This morning there were many hands out for taxis.

My second customer was from Venezuela heading for East Point for a training course. She worked here and was transferred to Spain and now she is back here doing a course.
Funny thing about her is that I couldn't understand why she was complaining that she was sooo late.

"I was supposed to be here before 9"

It was the taxi meter you were looking at.

Then I picked up and dropped close to the Grand Canal Theater.
Just around the corner a couple from Venezuela going to Dun Laoighre.

Just a tip for the wise. Memo to self:the level crossing at the Merrion gates is very slow in the morning, I should have gone up through Sandymount and towards Ballsbridge.
But guess what they did for a living? They were musicians and they played Cuban music at the Dun Laoighre world festival of cultures, what great event that is.
They play Cuban music and laughed among themselves about the impish humour of the Cuban people when they were there learning their music.

One other group who are not short of money at present is the Irish oil co. DCC.
They expanded into the UK and bought up loads of small oil companies in England then they started a website(It is alleged)"Boilerjuice.com" you would go there to find the cheapest oil and the DCC price would come out trumps. Even though their price was in some places 65% more expensive.
Someone smelled a rat and found out who ran boilerjuice and now the serious fraud office is involved. Compare last week Cornwall urgent delivery of 500 liters of oil Consols oils 317 Stg compared to 522 Stg from boilerjuice.

You have to hand it to them it was a good plan.

Now it is your last chance to see "The Field" I do hope that it goes well, it is a powerful play Brian Dennehy has the role today.
Ray McAnally played the leading role when I saw it last, he was in line to do the movie when he died.
(I held up his BAFDA award once!)
You might remember him from "The Mission" as the evil bishop!
That was one good movie.