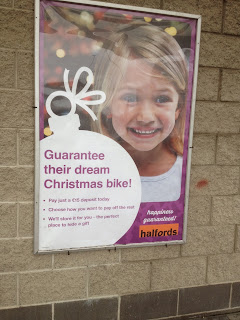 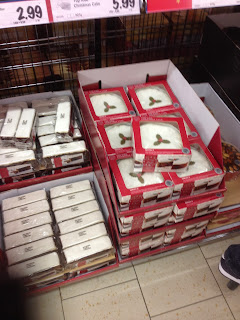 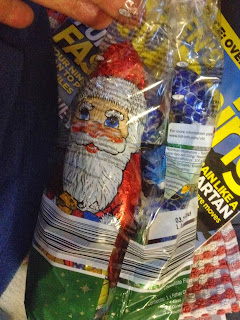 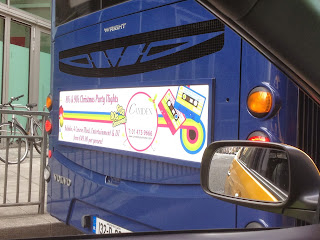 A few weeks ago I saw them in the shops.
Perhaps it was a mistake?
But no!
Christmas really is coming now.
In Lidl they have the Christmas cakes and puddings on the shelves.

Halloween has not been, where are they going? If there was other stock on those shelves they would empty them a few times before it was time to put on the Christmas stock.
But it is on the buses advertising Christmas partys and more.

Time is speeding up, as soon as the new year comes in the offer the Summer holidays.

There was a shooting on the SCR near Hanlons corner, one guy a known drug dealer was shot in the head and 4 girls who were smoking outside were shot in the legs.
I knew nothing about this when I started my morning shift, then I was hailed by a sober guy on Auinger St.
As we went across the junction he told me to pick up another man on the other side of the road, then a third further on. My heart sank as I had no means of self defense on me. When I did work nights I carried "Deep Heat " spray in the car with tape and a straw down one side to show me which way the nozzle was pointing when I picked it up. Even having that or a baton helps. It gives you confidence, though if you have to use it you had better hit hard and quick because if they get you on the rebound you will be dead.
I used to have CS spray but I was told that the robber would sue you for giving him chronic asthma and you the victim could loose your house as a result.
The law is an ass.
Anyhow they were not interested in me that morning. They had a score to settle and were on their way to tool up and find the gunman, then they went into the "convict speak" the language that they use to talk to each other.
I was not on the menu today.

In a more normal form of employment you could reckon on making a fixed fee per hour, not so in a taxi.
There was no fish to catch today.The punters were at home in bed, so I went to bed as well.

You can go to school or even to university to learn but the real teacher is to learn by your mistakes.
The lessons you learn by trial and error stay with you forever.
At the rank the other day a car moved off and when one of the other cars tried to start. His key did nothing. Modern cars are computer controlled and when they detect an "error" they just sit there.
I told him. Take out the key, leave the door open, disconnect the battery, wait 5 minutes then reconnect the battery and the computer will reboot.
I went back to my car only to hear a big roar S***T.
When you reboot a car it locks the doors.!
Even though I had told him about the key and the dooor open he had closed the door and his key was on the drivers seat.
He was locked out with the spare key in Naas.

That is one mistake he will never make again.

Will this income tax ever be finished,my dog died, my wife is in London looking after my oldest son who is in hospital. Then my most elderly friend is dying.

Someone told me that I looked a bit stressed out.