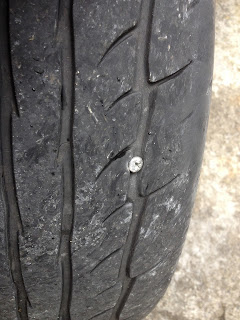 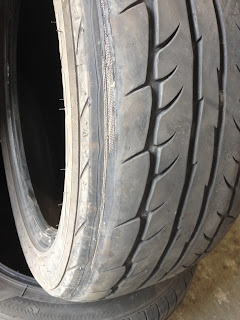 The opposite tyre, it looked like someone had gone at it with an angle grinder 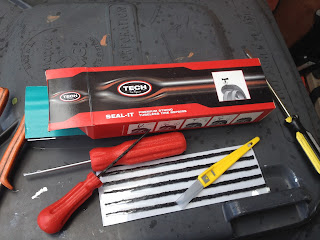 Everyone should have one of these to PLUG screw or nail holes in minutes.

I saw a screw in my tyre and as I was far from home I headed for a tyre place.
The guy brought the car into the workshop and I waited, while I waited I listened to the office guy talking on the phone.
"Bad news on that exhaust system, the end box is gone but if I try to join a new end on to it it will break off. You can't join new metal to old. It would be a much better job to replace the whole system
I had a look at those tyres and you need to replace the 2 front ones they will never pass the NCT.
OK I will pop them on and your car will be ready at 3.pm"

Every time it was for a few extra bucks.
Then my man came from the workshop.
"Your tyre is badly worn on one side, the tracking is off.
I can't fix the puncture the tyre is unsafe"

I said put it back on so (In French)

Still it could have been worse, a customer told me he had bought a BMW with "Run flat tyres"
the sales pitch was great, your wife will never have to change a flat wheel..Until they got a nail in a tyre, she drove home and the next day the husband went to the garage, to his dismay he was told that the tyre would have to be replaced at a cost of £200 stg.
OK put on 4 ordinary tyres for me, slight problem? there was no spare wheel, nor was there space for one!!!

I went to Ana Motors in the Butterly business park Artaine where 2 new tyres were fitted and the steering realigned.
You have to wonder how much scamming goes on in garages, "You will have to have a new doofer fitted next time" (The lovely lady says to herself he is a great mechanic the way he looks after me )

In Britain the dept.of industry send in decoy cars and then assess the work done.
Then they can fine or close offending garages.

Trust is what business depends on.
You ask me for a service or a product both parties expect, that what they are paying for is at the right price and what they are getting is what they expect.

We were on Grafton street and he told me this.

There is a jeweler close to where we are and he will buy Gold for cash no questions asked.
He sells fake diamonds such as zirconia, zircon and moissanite.
Hundreds of couples have paid thousands of euro for fake stone worth a fraction of their cost.

So take care out there or they will take away all your pocket money !
Posted by John at 3:22 PM