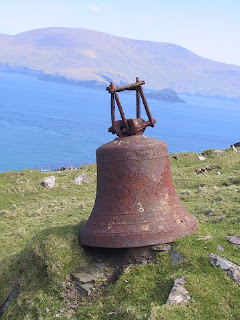 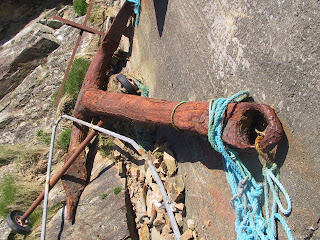 My Mothers grandfather came from the Blasket islands, It was a place famed for its writers and poets.( I wonder where I went wrong.) After many losses of life at sea the island was evacuated in the late 50's.
That ruin was where my folks came from.
Funny thing is that a Belgium couple had a map which pinpointed the house. We had not a clue where to look.
Those black whale like objects are Curraghs which can skip through the Atlantic waves like a knife through butter. The square holes in the bottom are for outboard motors, you should row. Thats cheating.

Great trip, happy to be away for 36 hours.
Tomorrow up to Cavan to visit the other folks.

I know that I go on like a broken record about the need for speed that the young folk have. Well guess what, when we were coming home we met the biggest funeral I ever saw. Three young people were killed. A car coming down a steep Kerry hill (18 year old driver)crossed over the road missing a car on the overtaking lane and demolished a car coming up on the climbing lane. 2 young men in that car killed. You could not even guess that the wrecks were once cars.
Kerry and Donegal have the highest young driver fatalities.