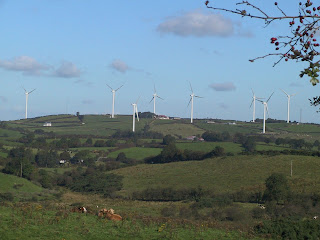 Wind farm.Still I would not be too happy to have such a structure close to my house.
click on the photo to enlarge it. 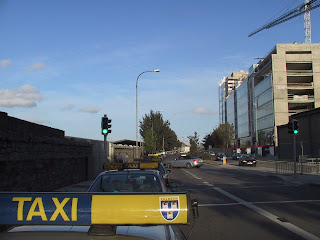 Before deregulation there would have been 15 cars at the station. The station is the white building at the end of the line.

The Garda are everywhere and Dublin city is in a state of high alert.
A few days ago a guy saw his car which had been stolen a few months previously driving past him on the street. He rang the Garda and the car was spotted by a Motorcycle cop.
When the Garda stopped the car someone in the car produced a sawn off shotgun and blasted him. He is alive,but as our rank and file law enforcers are unarmed it was a very cowardly act.
This will be the catalyst which will end the gang war which has been going on over the last 18 months or so.
It has been a shooting every week or so,one side taking out the other.

The last time something like this was going it took the murder of a young journalist
Veronica Guerin in 1966 to put a stop to the killing.It still seems like yesterday though it was 11 years ago.We passed the car she was shot in as we were on our way to Naas that day.
The criminals got their asses kicked and the "untouchables" found themselves banged up in Portlaoise prison. This is our Alkatraz.

If the Garda set up a network with the taxi drivers they could distribute information via text and mobile phone.You can set it up on computer.We are thicker on the streets than them after all.
The situation with the young Garda at present is that they just hate our guts and will prosecute us for the least little thing. ie. holding a mobile phone.

Bumped into an old friend, I had not spoken to him in years.
After the usual hellos he told me about his bad luck.
His partner and himself were getting on fine and she was out riding on horseback when she took a fall.
She always wore a helmet but for some reason the hard hat came off and she took the full force of the fall on her head and she was killed.
The life has fallen from his world,"the ground has been kicked from under my feet"
It is important to talk these things through.

Things like this make one keep your own little troubles in perspective.

A long time friend told me the other day how he had to pay over a e million in tax.
"look Robert wouldn't it be worse if you didn't have the money to pay them".
He laughed a lot at the logic of it,but in fact sportsmen and famous actors often fall into this trap. They spend when times are good and when times are hard the tax man puts out his hand.
At least my earnings will not put me into that tax bracket.

Speaking of work back on duty tomorrow.
Posted by John at 8:24 AM