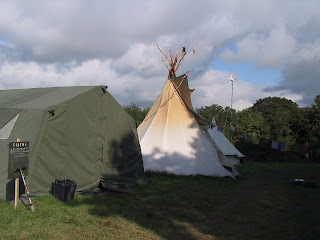 The "Save Tara Camp" 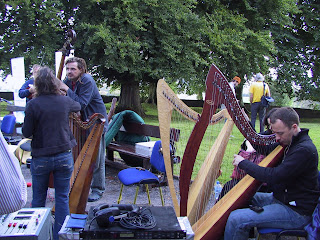 Musicians at the ready with Irish harps. 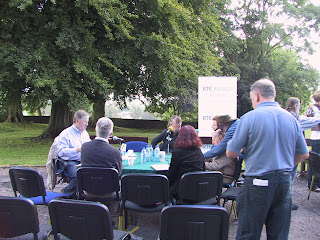 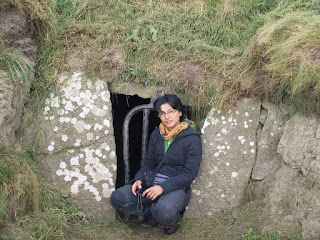 A Sicilian girl gets her photo taken at the ancient burial toumb
She is very easy on the eye. Click on any of the photos to enlarge. 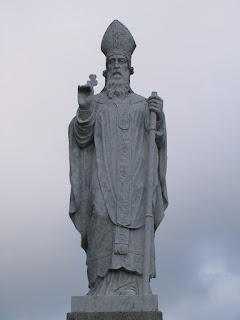 Statue of St.Patrick who is the patron saint of Ireland 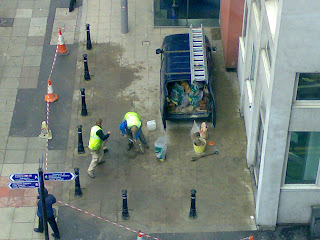 Well they came in a hurry. Rush rush rush put up the tape.
Get those bollards into place.
Just giving a bit of a sweep up before dashing off again.
Well these guys were not thinking ahead.
Their dinner might be cold by the time they get home.
This picture was taken at the IFSC in Dublin, sent to Sydney and now sent out again.
Its a classic.

I was passing the Hill of Tara the other,this is a sacred place in Celtic lore.
It is known as the place where the high kings of Ireland were crowned. It should be treated with respect and reverence instead they are planning to run a motorway down along the side of the hill and a 40 acre interchange at the bottom of the hill.
Apart from the noise it will totally devastate a very important historic site.
When I got up to the church they were making a live radio programme at the church.
The Italian group who had their guide did seem to understand the importance of the place and were shocked to see bulldozers buzzing around.

Taxi strike in New York look at New York Hack and Cabs are For Kissing on the right for news.Or pop over here to get a defanition of a scab!

I have been cutting grass and painting and not doing much else.
We have a new visitor to O'Connell St.
The statue of Jesus is back up outside the Gresham hotel.
I thought he was gone forever. 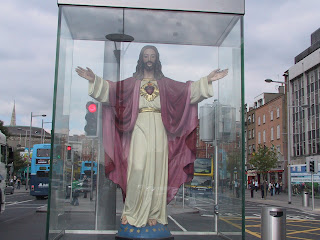 This is the statue which was greeted by a Hispanic looking American as "Look Dad a man in a dress" and dad said "Gee what d'ya know"
I guess it had been a long time since they had been to church.
Posted by John at 3:15 PM