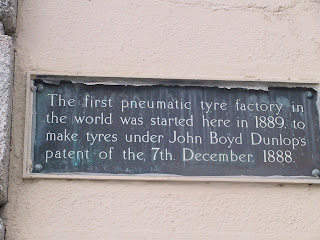 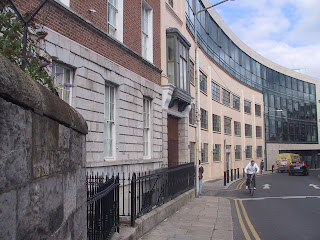 Another thing you didn't know about Dublin.
Wonder did he ever drink in the Long Hall, the pub was there then.

Well I have survived for another week!
The festival of foreign cultures took place in Dun Laoighre in brilliant sunshine!
All the foreign people I told about said that they would not be going because it is raining so much would have been pleasantly surprised.
I went out and saw that there was plenty of taxis there, but I did get a fare to Ballybrack from people who attended. They said that they didn't know what was going on at any time so they waked around until their little girl got tired.

Earlier I got a fare to the ferry and I saw a group of people gathered there.
I went into the terminal building and asked what was going on.
The driver of the shuttle bus was new. He came up and drove away again before the passengers got off ! Now he was down in the bus station bringing people to the ferry which would be sailing in an hours time.
So I took it upon myself to be helpful, I told them of the delay and that 4 people would ride into town together for around e18. Thats less than the bus costs.
One of the people said "Here is the bus coming now". Well that is as may be but you would be at your hotel before the bus leaves the dock area,allowing for loading and unloading.
I don't think your bus will take you directly to your own hotel.

I left them to stew in their situation and drove off.

Reminds me of the day when there was a bomb scare in O'Connell st which was closed off and the Aircoach couldn't operate.
A group of travelers were waiting at a stop in Leeson St. I pulled over and told them the story, "Get a taxi and share the cost, it is cheaper than the aircoach anyhow, Thell the driver to go up Pierse St and out by the Malahide rd to avoid the traffic."
I was met by skeptical faces and blank stares.One guy broke rank and asked me to take them."Sorry I'm booked on another job, but I didn't want any of you to miss your flight."
The scramble for taxis was instant and as I crossed the road I saw the biggest skeptic standing at the bus stop alone, his choice now was to not believe me and miss his flight or get a taxi alone for e30.
I wonder did he make his flight?.
I didn't see any buses for another hour.
It was a false alarm anyhow,some twit had left his bag on the bus.

I had a couple from Malaysia in the car, he was looking at the car for a long while then when it was my turn to go they hopped in.
They were looking at the Prius display and asking loads of questions.
She had the English, so she did the talking.
They said they were going to Lucan but as we approached the river Liffy they decided they would go to Mary st. instead. Perhaps the next time I should dispense my information more slowly.
Still Lucan is a long ride in a taxi so it would have been expensive.

I had a letter from the DAA today.
"If you don't pay us e400 to renew your airport pass before the deadline if Sept. 2nd you will not be allowed to renew your pass and you will be moved to the back of the waiting list of people looking for passes.

(1)Well if you look back at the beautiful new toilet which is seldom cleaned, with the puddle of urine across the floor.
(2)Add to that the sometimes 2 hour wait to pick up passengers.Plus when they get up to the top customers say "there has been no taxis up here for 15 minutes"
(3) I have reported taxis who have avoided the whole taxi queue only to have nothing done to them.Once I was told that the camera where the pick up took place was controlled by the police and they did not have access to the tape.
(4) Drivers who scam the public at the airport are not a rare breed, yet there is nothing done about them.
(5) There used to be an airport pick up charge and baggage charge which was abolished, so you see they just want money from us poor mugs to pay for the airport extension.
(6) When you are dropping off in the morning it could take you 40 mins or more to reach the departure area. Why? Well departing passengers coming from the multi story car park cross the road on a zebra crossing in ones and twos causing a tail back of cars. The solution is simple, a guy with a whistle and a baton directing the flow.

Simple but seldom put into operation.

They should be paying us!

Sorry boys fresh out of contributions.
Posted by John at 10:36 AM