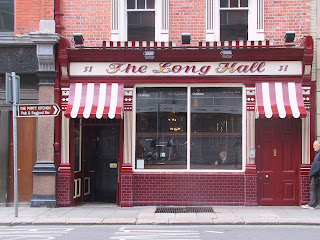 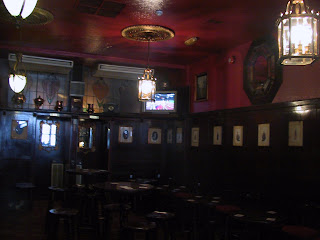 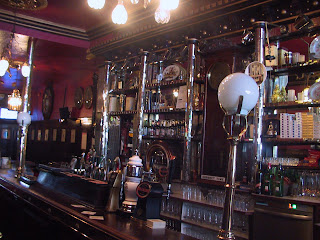 Inside and outside the Long Hall on Sth Great Georges St.

Well the steps I take to show you Dublin.
This is one of the finest Victorian bars in the city, spic and span.

Near this spot is the first rubber factory in the world.
Photo to follow next posting.

I saw two things which caused me concern, perhaps its a sign of the times, I don't know.

I collected my kid from a concert and we arrived back in Fairview at around 12.30am
While he was getting his kebab (I was waiting outside) a boy of around 11 years walked across the road from Fairview park. He had blood smeared over his cheeks and down his jaw. He walked into the kebab shop and asked something, then he ran back across the road,5 lanes, and back through the park.
When the lads came out I ask them what the lad had said. He was looking for the Clontarf road, so when I brought the lads home I drove back to the Clontarf Garda station.
I rang the bell in reception.
Nothing.
I waited a while and I could hear 2 male and one female garda talking.
Then I rang again and I noticed that the slatted spaces in the mirrored partition had been covered up to stop the public looking in and them seeing out.
I rang the bell again.
I waited and I could hear another garda making a phone call not 6 foot from the front desk.
My blood pressure rose and I walked out, on the way out I met a garda car coming back in and I told him my story.
He was not too concerned, but said he would "Look into it"
As for them not answering the bell. "He would tell them"

The cynic in me is saying that he was bringing home the Chinese dinners and that no one would be looking for an 11 year old boy lost,with blood on his face for quite some time.

You would think he would say, "give me your mobile number in case we need to contact you"

I know the problems in every city are bad, but the boys in blue need to do a bit more than set up speed traps,chase taxis from loading bays and check for road tax.

The other thing I saw was a taxi with 2 bald tyres, so bald that I THOUGHT THEY WERE SLICKS
so I got out for a closer look, the one on the right was so bald that the canvas was showing right around the outside of the tyre.

If he had a crash his insurance would not be valid!

In any properly run industry he would be hunted down and disqualified from driving.
The cars which are out at night need much to be desired 20 year old cars in some cases. Cars which have not been cleaned in weeks reeking of tobacco.
Driver not much better.
These cars are often hired out by the week and driven by a selection of people.
Many of these drivers do not hold PSV licences or even Irish driving licences.
God knows who some of them are, I hear stories and they are not happy ones.

Well I have had my rant, perhaps the driver has no money, who knows.

I herd of a taxi stopping at Bakers corner the other morning. Lights went green, guy stays there, so my man who told me said when he got a chance he drove past him.
There he was at the lights asleep!
Now if you fall asleep in the minute it takes the lights to change he must be in a bad way. Pity the poor people he might crash into.

Perhaps he has kids to feed! or school books to buy.
Then the taxi regulator says we just need to work harder.

But you know if there is 50 taxis per thousand people or 150 taxis per thousand.
The service to the public might get better in the short term.
As incomes fall the crooks and trimmers step up to the mark.
Joe public starts to ask why so many drivers don't know their way around.
Or why sometimes it costs twice as much to come home some nights?

I see the vultures waiting at hotels to swoop on tourists, taking them the scenic route.Ripping them off without mercy.
The honest driver will decide that the trade has become tainted and he will move on, leaving it to the crooks and skimmers.

I am still taking it easy as the schools are going back next week.
Third level students are coming back to the city form their summers work abroad to look for accommodation www.daft.ie or the evening herald is the place to look.

Rents are down or so they say.
So are house prices, a guy who works for a leading bank told me that a house I was looking at will(in his estimation) drop another e70,000 before prices stabilize.
That would be a lot of negative equity.
Now with talk of recession in the UK as well things might go back to the 80s, which will be really hard for the spend generation.
Plastic credit card kids.

Anyhow I don't know where my future lies in this "industry", as with many others we must think of other things.
Perhaps I will go to Hollywood and be a young stunt double for Robert Redford.
Or perhaps the Lotto millions, who knows?

I see from the news that the upper managers have given themselves hefty pay rises with good bonuses. These are the guys who were saying that the minimum wage should be cut by e1 per hour. Hypocrites.

Just a thought for the HMS Prison service in Britain. Someone lost a memory stick with the details of 80,000 prisoners un encripted....and wait for it....the entire prison population will be entitled to sue.
Happy days for the legal profession, I can see them heading for Belmarsh and Strangeways as I write. Goodnight all.
Posted by John at 3:02 PM