It is OK Hooray

The postman dropped 5 copies of the book in to me today and the 13 missing chapters are in.

I also bought a copy of the eBook and they are in that as well.
A few spelling mistakes here and there.
Just to show you that I am human.
When will this lock down end ?
Donald Duck went to a solicitor "I want to change my first name" he said.
I must say the internet has been great for jokes!
A Cavan man was walking down the street with his wife and they passed a new fancy restaurant, as they passed the wife said "Oh that food smells divine" As he was feeling generous he turned around and walked her past it again.(Cavan people it is said are careful with money)

The author drove a million miles and met thousands of people, they all educated him.

Some of the people I met would inspire anyone
Posted by John at 10:17 AM No comments:

Happy birthday to me

Today the book launched on Amazon (Kindle direct publishing) but it has not gone to plan at all.

Six chapters of the book are missing!

If you can imagine that the cover for the printed book was designed for around 140 pages with 6 chapters missing it will be a lot slimmer.

Still it should be fixed for the paperback, fingers crossed.

I saw a death notice on the internet.
I recognized her straight away.

Her name was Lynn Shelton 54 had died from an unidentified blood disorder.

A few years ago there was a guy who was really tense walking up and down outside the Westbury hotel, he was talking to himself and gesturing wildly, I thought he was cracking up, after a while he went in to the patio area where he spoke with Lynn. Later on the guy went off to the toilet and the lady called me over.
She said that she was a movie director and that she was worried about the man. Straight away I told her that she would do much better in front of the camera. She was really beautiful.
She told me to wait for the guy and then take him to the airport safely.
I never forget a pretty face,so I was shocked to read that she had died at 54.

The guy was an actor and had come over for an audition but his nerves had got the better of him.
It was 3 hours before his flight so I brought him home for a cup of tea and a slice of bread.
My son is a drummer and this young man was the grandson of Buddy Rich the legend.
He played on Davids drums and a lot of noise was produced.

So the "Steering wheel university" will be fixed.
But a wonderful warm person Lynn Shelton is gone.

This lockdown has me driven mad 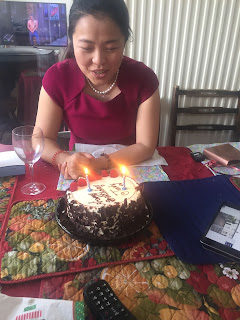 Poor Judy, she went back to China for 3 weeks to visit her parents 4 months ago


Great for me I won the Lotto, if you could call €4 a win.Still "Manys a Mickle makes a Muckle.
So when I was picking up a few groceries I handed in my ticket and asked for a quick pick without a +
She scanned my ticket and then rang up for a new one. She was not used to the job and ran the ticket in with a plus. I never give back a ticket in case I am throwing away a winning ticket.
The ticket came to €3.50 and she asked me for 50c. No you owe me 50c.
She just couldn't see it.
Luckily there was a supervisor who jumped in.
"He gave you a ticket worth €4 and he bought a ticket worth €3.50?"  Said the supervisor.
"So he owes me 50c" Said the girl.

The supervisor reached into the register and took out the 50c. Thank God

There are none so blind as those who will not see.

On taxi driving you have to keep your wits about you all the time.
When I am giving change I count up. The fare was 21.60 Here is 40c brings it to 22 plus 8 that is 30.
The money that the punter gives you you place on the dashboard so that there is no dispute as to what you were given. So I went into Northwood and a tall Brazilian girl came out.
AIB, AIB. Where is that? AIB she said again, so I just said show me.
It was the Allied Irish Bank in Santry!
As we were turning into the bank she gave me €20. "You hold on to this,"
Then when we stopped she said wait for me. Can you give me 2 tens?
At that point I said we are all square now,so off she went.
She came back and we drove back to Northwood, on arrival she said (which didn't surprise me)
"Just take it from the €20 I gave you"
The row kicked off and then I said.
"Look at that blinking red light. That is a camera.
We will go down to Santry Garda station and sort this out now".
As quick as a flash she paid me and hopped out.

She must have done that a lot as she had it so well rehearsed.
Still there are a lot of prostitutes in Nothwood.
I am not saying that she was one, but that is such a sad road to be on.
I found an organisation to help.
Ruhama 01 8360292 or support@ruhama.ie
Sad to say I do believe that some Garda turn a blind eye to what is going on,
Posted by John at 10:12 AM No comments:

Well the eBook launches for pre-order tomorrow, then it will arrive on the 19th.

It is in lockdown now so I cannot add to it.
Many tales have come back to me but this one missed the bus.
In Sandymount there is a terrific coffee shop Cafe Java and I was coming out when an African lady started to shout at me from across the road at the pub.
I drove over and she got in. "City West" "Which way do you want me to go?"
"God damn it the bloody driver doesn't know where it is"
I stopped the car. "Do you have a preferred route to go? I would go over by the canal"
So she directed me along the coast to Dun Laoighre and along the M50.
She was talking on her mobile fone so loud that my ears were nearly going deaf.
As we passed the sign for Ballymount she roared. "Jesus I don't believe it the fecking eejet has gone the wrong way, we just passed a sign for Ballymun"
I was fuming, and told her to put the fone down from her face for a minute, learn to READ that sign is Ballymount, the next one will bring us to the Naas rd".,
So she started talking again at full volume.
She worked for a company and they were holding a reception in the City West hotel for 1,000 people.
She was going there to get free drinks on arrival and canapes for the guests.
She paid me and got out, I went into the hotel to use the toilet,lucky that I did.
When I came out there was an old guy pushing a trolley with 4 suitcases on it.
I decided to help him. I told him that anything with wheels has to be pulled on gravel. If you push you are pushing it into the gravel and making work for yourself. I pulled it along with him and I told him about my lunatic friend that I had brought to the hotel. He said "You might not believe this, there are only 3 venues here in Dublin that can cater for that many people to do what she wants would cost €8000 or more,extra staff, breakages etc. That will not happen. As we were walking back to the hotel I saw two Hummers and a Rolls Royce parked to the side. "Wow they are wonderful cars" I said.
"Would you like to drive one?" he said "I will get the keys"
"No No, If I damaged the car we would both be very upset, its best not."I said.

"You are right, that would be a tragedy alright"

"Is that your taxi?
Do you have a run back into town?
Come inside to see if there is anything going soon?".
There was a run to the airport coming up in 20 minutes.
So he shook my hand and ordered me a coffee and walked away.

When the receptionist came back with the coffee I asked her who was the old guy?
"Do you not know him?
That is Mr.Mansfield he owns all this"

Then the African lady came waddling over fuming with temper.
"Take me back to Sandymount"
I was delighted to tell her that I had another job on.

To this day I believe that she had a screw loose in her head.