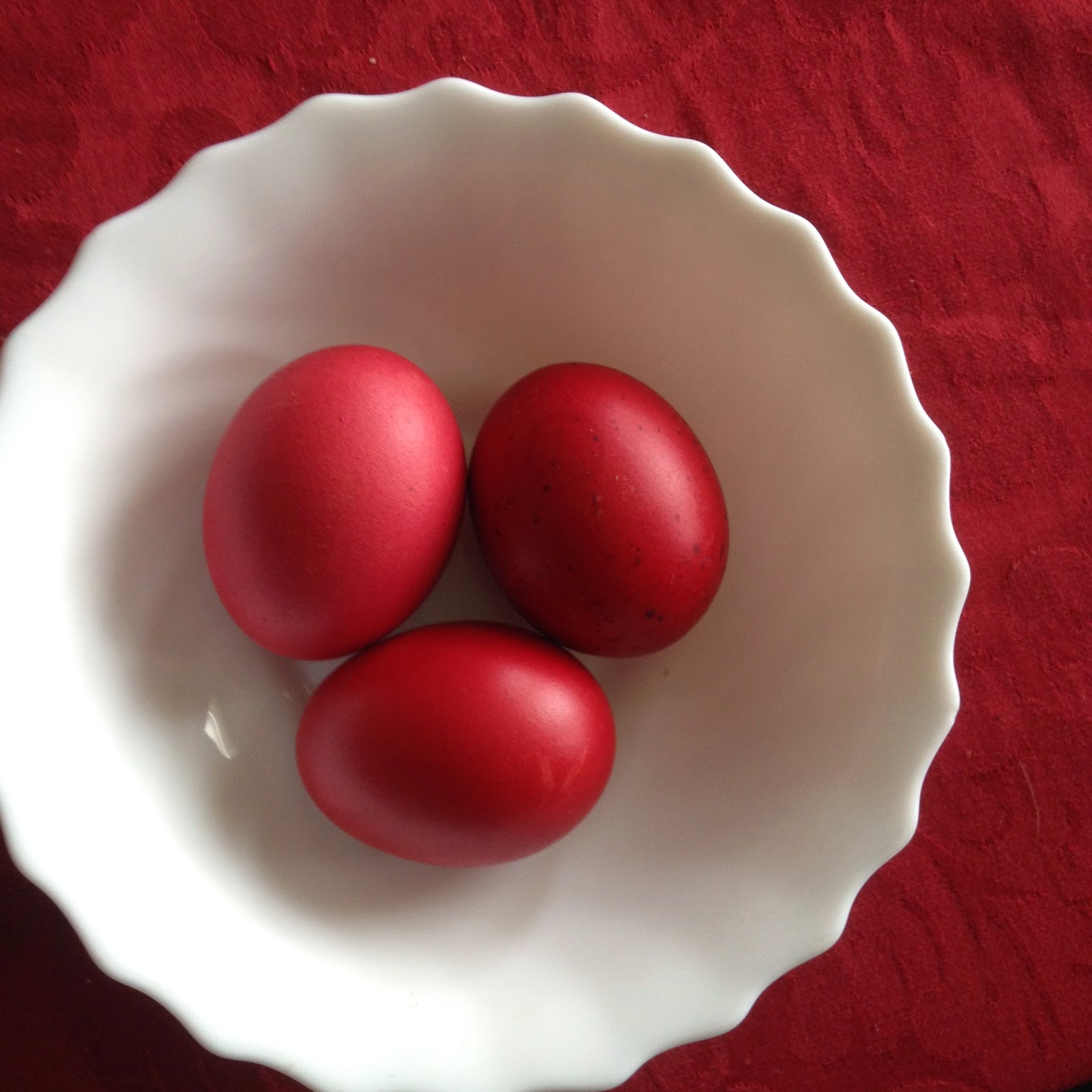 As Easter was over for us here in Dublin the Russians and Romanians celebrated their Easter last weekend. A Romanian tradition is to die the eggs red and when you crack them open you bless yourself and say "The blood of Christ " 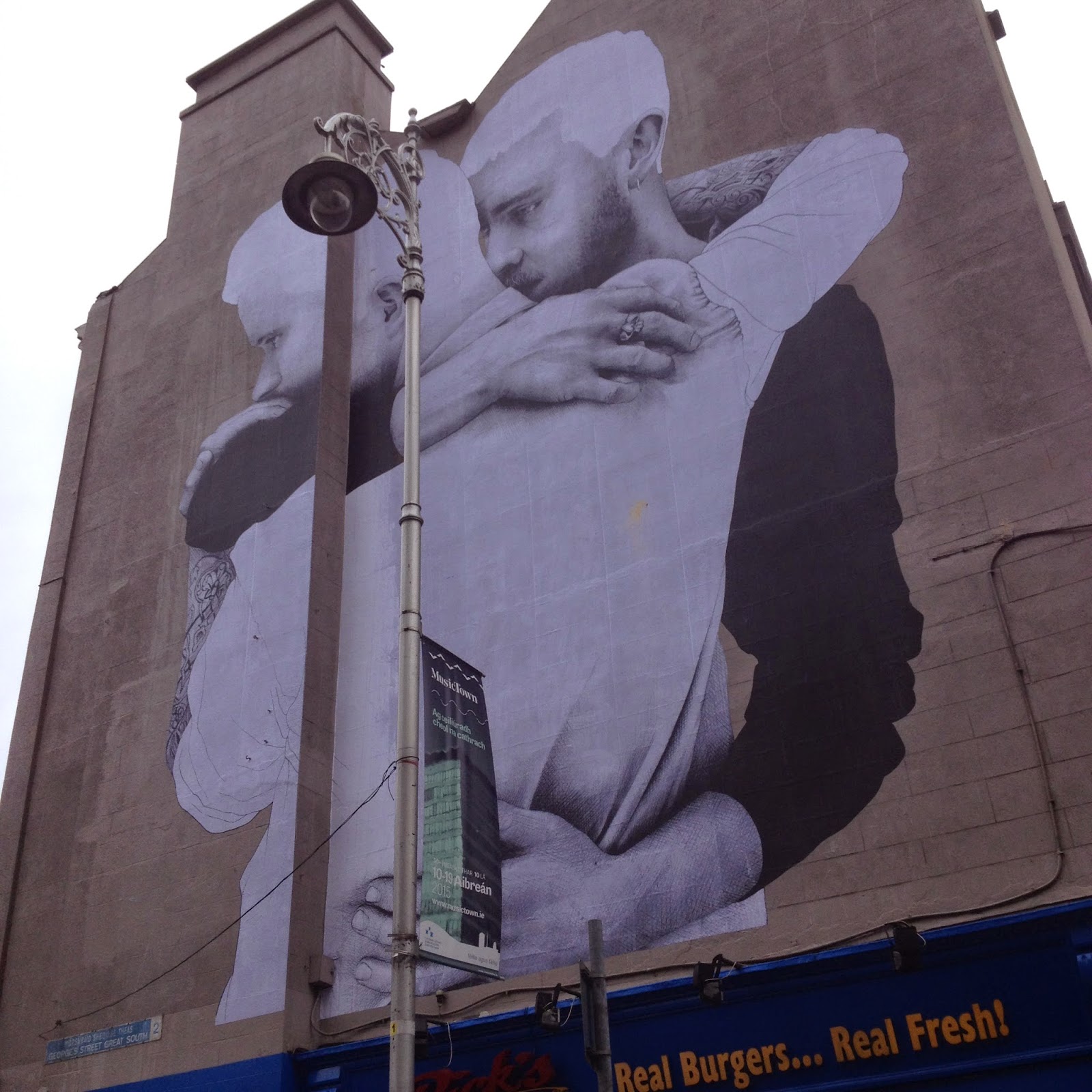 On Georges St. a mural of two men embrace a sign of the times 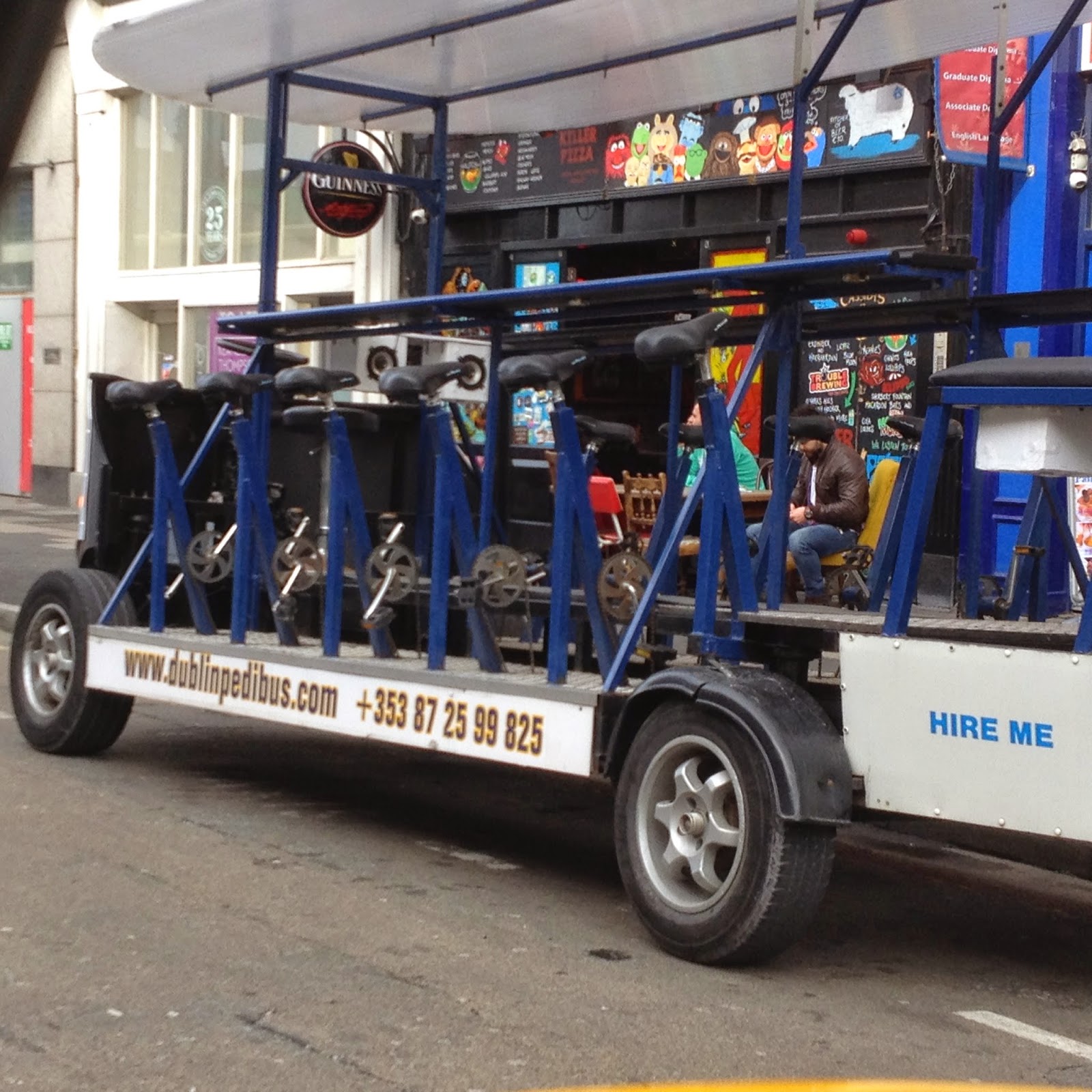 I don't know what happened there, I published and then when I took a look most of the script had vanished.
Anyhoo The above vehicle carries 10 or more people who pedal and a driver who steers and operates the brakes.
The leader of the Russian Orthodox church Patriarch Krill said that Putins rule was a "Miracle from God" I guess the old boy is not Ukrainian.

So a guy gets into the taxi not for the first time, He comes from a land of camels and Oil.
I remember him.
He has seen the blog and we have a big chat about the ways of the world.

Religion it seem has us all fucked up for sure.

I brought him to the wrong destination, so I turned off the meter and just charged him €10
When he was getting out he handed me €30,
"No mistake its all for you I enjoyed the trip so much"

Perhaps there is a God after all

I didn't want to rewrite the whole thing but did you see at the convention center we had another big conferring ceremony 2,700 new Irish citizens. We are a growing nation for sure.
Posted by John at 3:27 PM 1 comment: 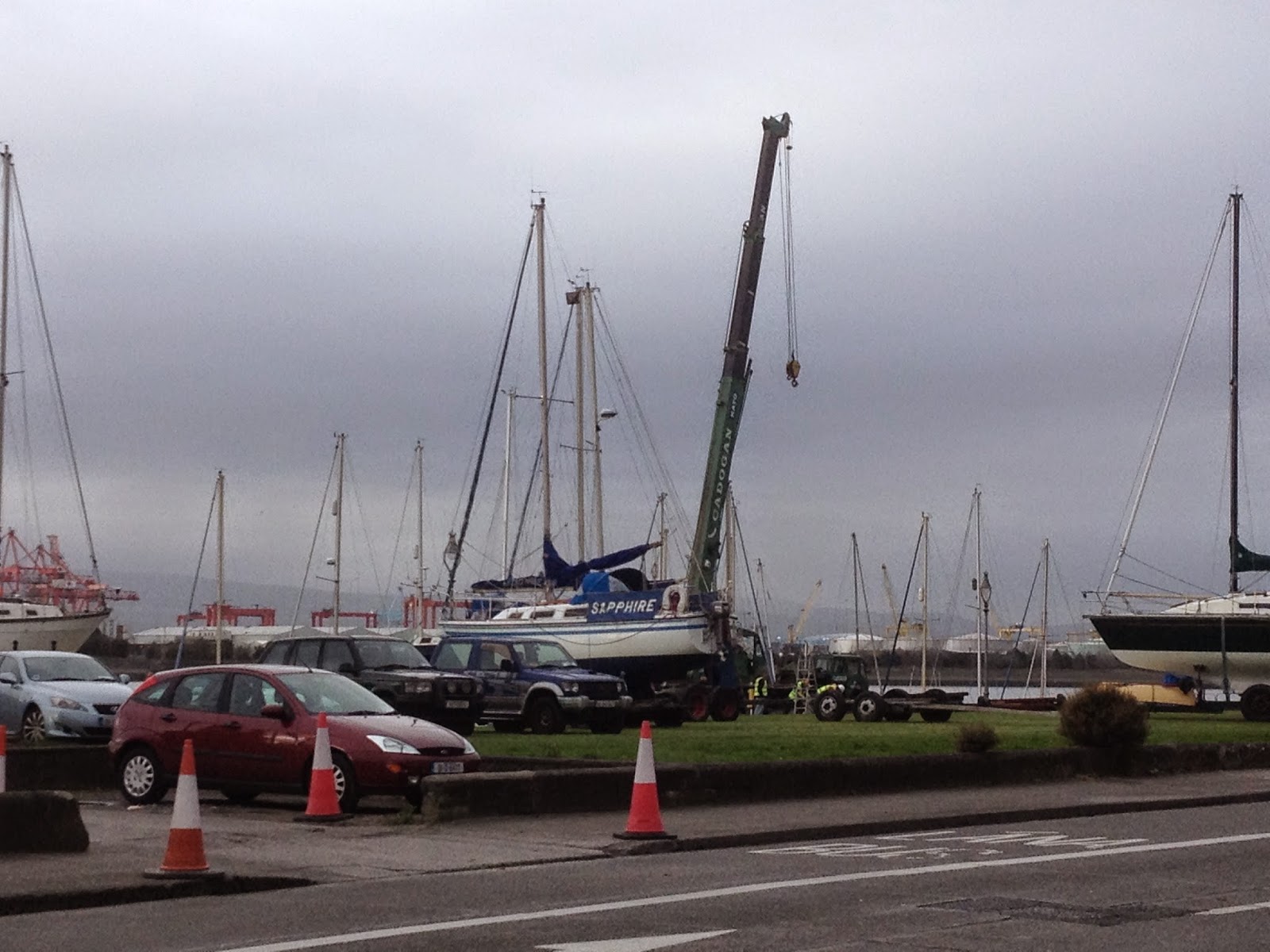 A sure sign of Summer, boats being lifted back into the bay. 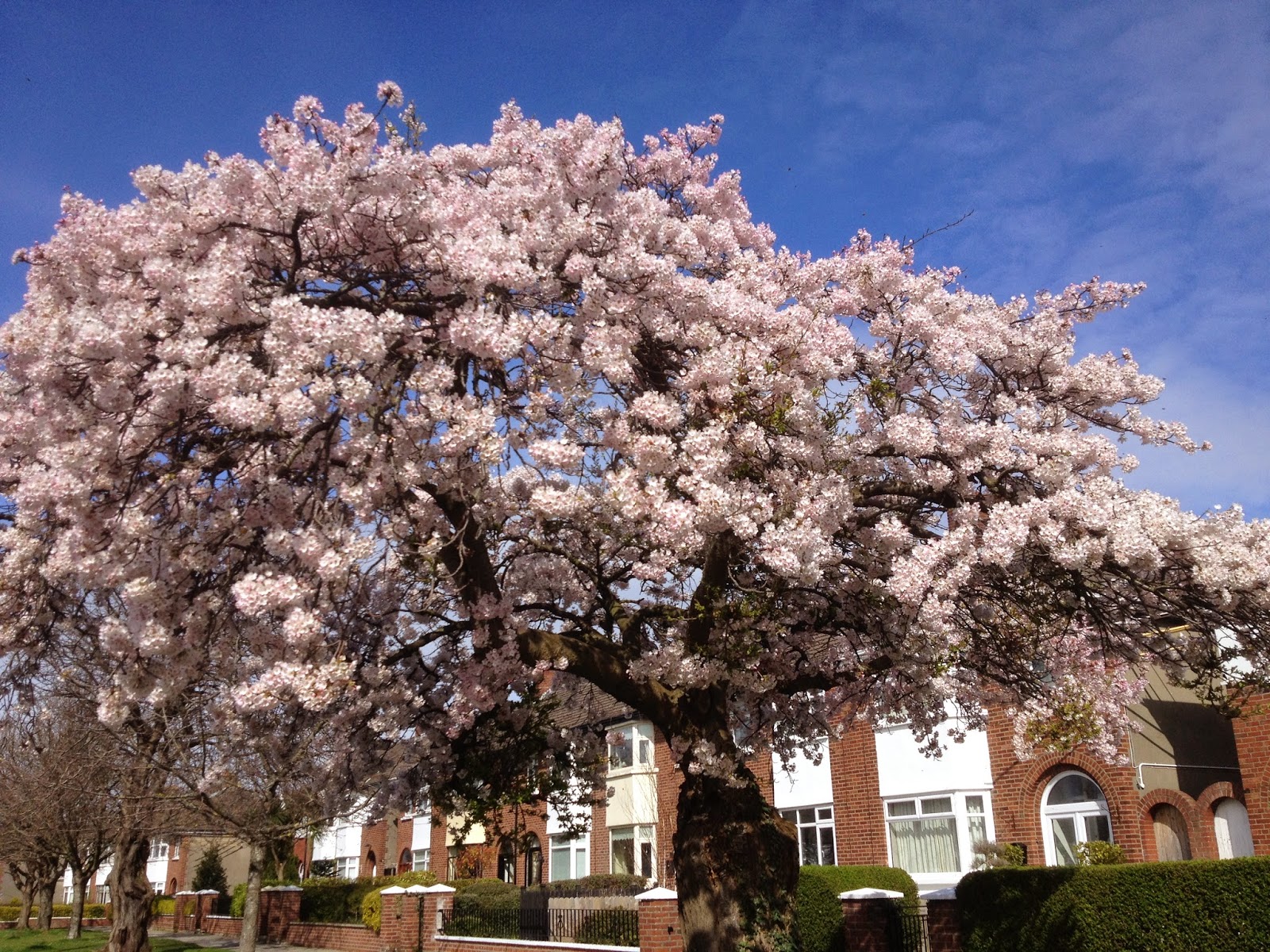 As I admired this tree, looking up at the blossoms and at the hundreds of bees collecting nectar a local couple were passing.
"Look at the fantastic blossom, listen to the bees, isn't it fantastic" I said.

When they stopped They were truly amazed by the activity among the blossoms and they told me that they had lived in this square of houses where this tree is for 4 years and never noticed the blossoms before.
The lady was very petite (Hardly 5ft.) and very exotic. I had spoken to her once before at the bus stop. So I had to ask again where she came from. Patagonia  came the answer.
I looked it up on Google and it is on the very bottom of South America shares borders with Argentina and Chile..Google also said that the native Indians were very tall and had very big feet. The name Patagonia comes from that,

People are built in proportion you know a man with big feet will have a big what ?
(Guess? answer at the end of the page)

By the way there is a man in Tokyo who reads this blog, he went to Trinity College in his youth and loves to see the photos of changing Dublin. He wrote to me once and said that in Japan they take buses out of the city's to see the cherry blossom, to sit under the trees and return to nature.I wonder if he still looks in

The world and his wife are away today, I had a near miss on Friday, 6 minutes waiting.
Then off to the Airport, €6 into the journey and out it came "Fuck ! Stop! Passport"
So back to square one and this gent who is all engrossed in his phone starts directing me,
Down Griffeth Ave. to Whitehall and out the old Swords Rd.
Traffic was light enough, but instead of going the motorway which is longer I always head out through Santry.
For 3 reasons it is better
Bus lane all the way.
It is shorter.
If there is a pile up you can divert which you can't do on the motorway.

My idiot passenger exploded. Stay on the bloody motorway !  So I went back down the slip road and took the long way.
Going to Berlin he was, for the weekend.
No Thanks or Tip.
I didn't say it but I thought it.
"I hope you have a wonderful break in Berlin Herr Hitler"
One consolation is that he has to put up with himself all the time..
I only have him for 1/2 an hour

How minor all that is compared to an incident in the Pheonix park over the weekend.
While the sun shone thousands of people converged on the zoo and the Pheonix park.
A youth killed a 22 month child of a Polish couple and drove off,
They caught the driver later and he has been charged.

I cannot imagine they much they are suffering over something like that.
If you have the ear of any God ask him to grant them peace.

It really brings it home how trivial a grumpy morons attitude is in comparison to what is going on in the rest of the world.

MEN WITH BIG FEET HAVE BIG SHOES.
Posted by John at 6:46 AM No comments:

Heading into Easter 2015 and big plans are being pit in place for Easter 2016.
You see it was at Easter time 1916 that our political troubles with England came to  a head and a revolution happened.
The result in a nutshell is the southern part of our island became the Irish free state and the northern part of the Island became Northern Ireland (UK).
Ever since then we have have had civil unrest, with IRA. UDA. UFF and many other factions who placed bombs in shopping areas in Ireland and the UK  killing men women and children.
Finally when we were all completely sick of it all, the masked men were brought to the table and they put down the guns.
It really took a great effort on behalf of Bertie Ahern, Albert Reynolds. Bill Clinton and George Mitchell from the USA to negotiate with them.

I am not going into a history lesson but you cannot go forwards looking into the rear view mirror.

Multi denominational church services through the land where parishes are united and we pray for the dead on both sides would be fantastic.

The money saved from all the planned events should be used to build a new childrens hospital. 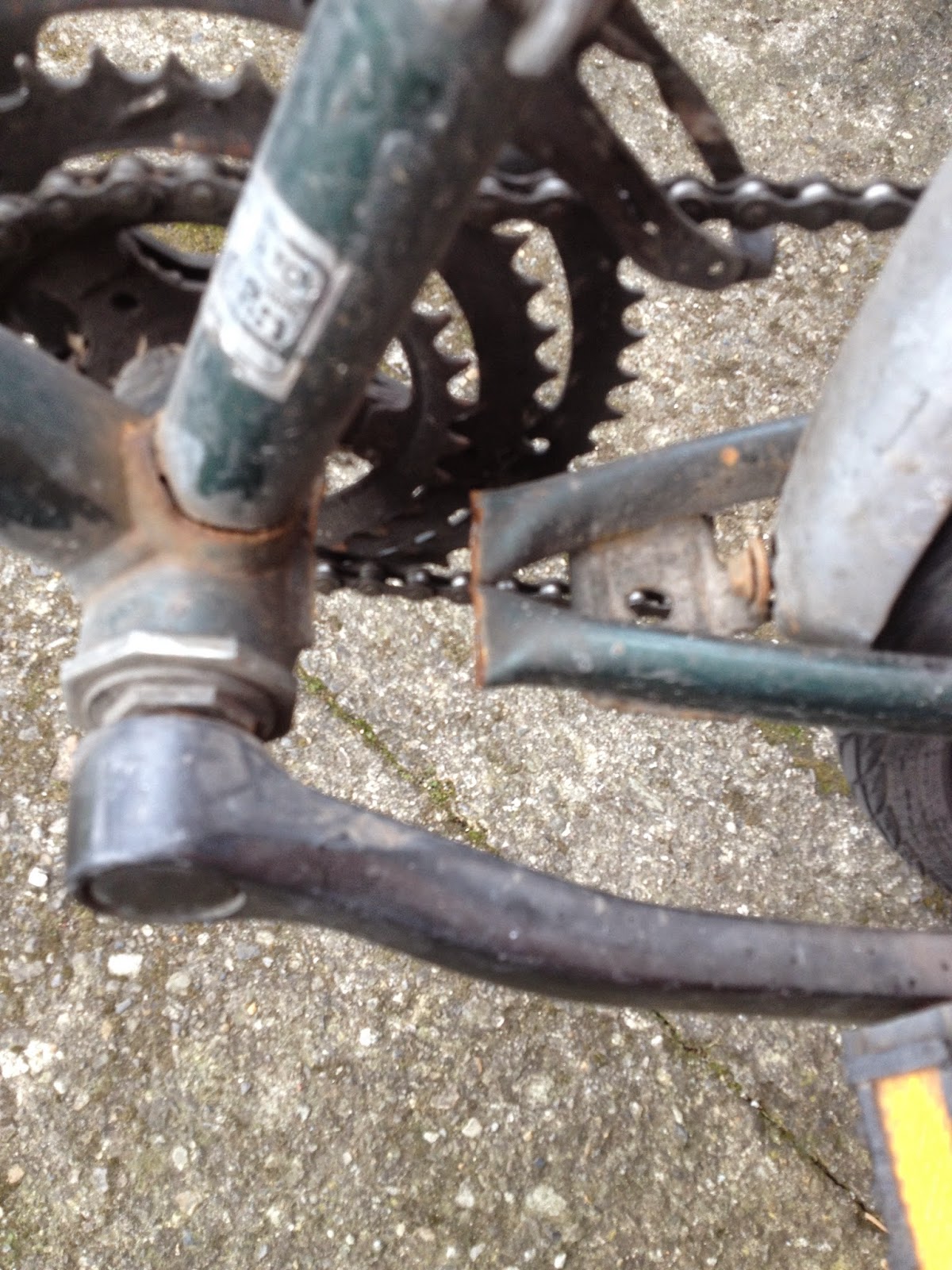 This is my son's bike. he hit a BUMP and the bike broke. The back fork snapped off and the bar going down to the pedals is gone as well/ 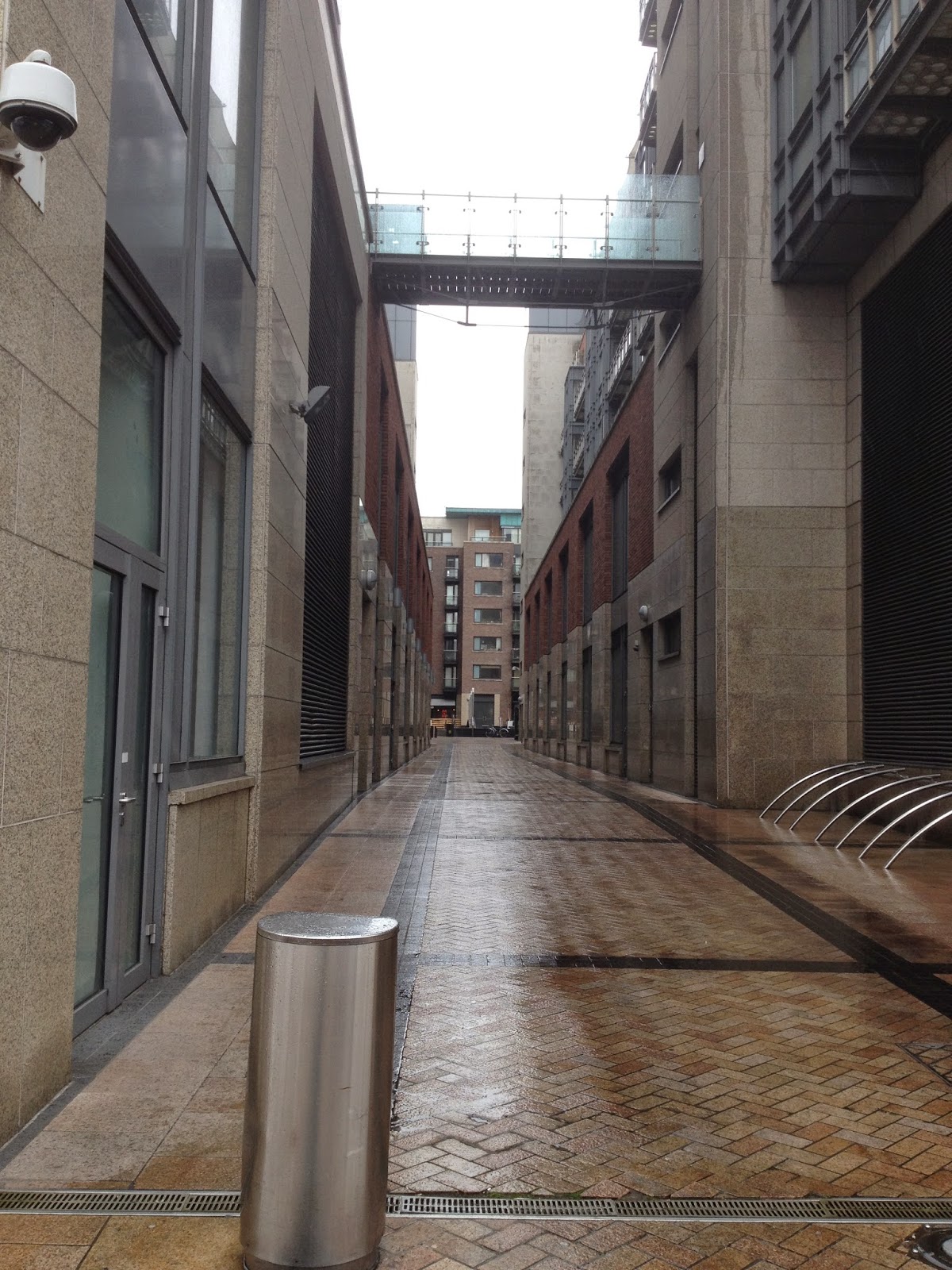 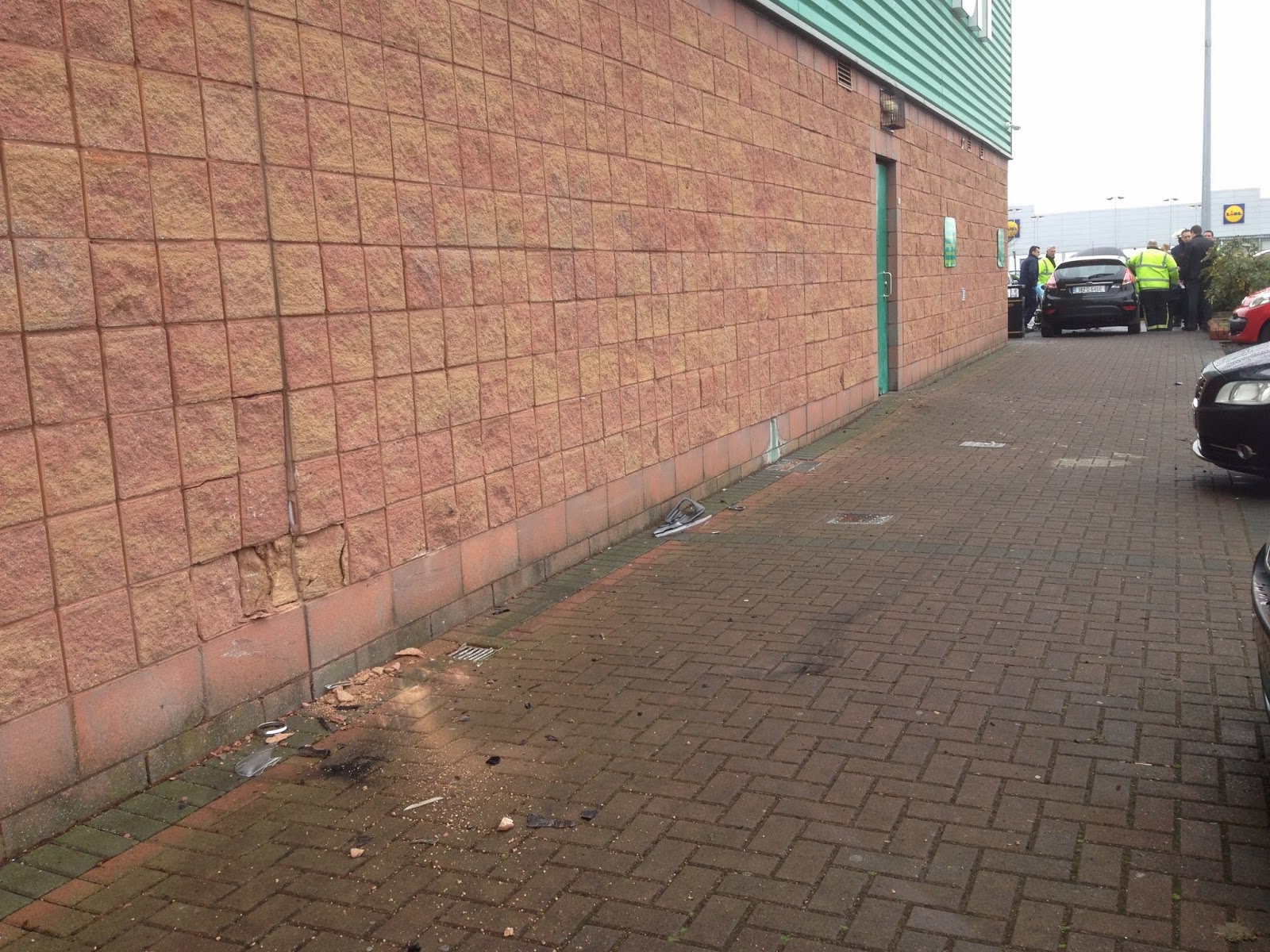 The car to the right of picture took off and hit the wall, then it drove down the path before stopping 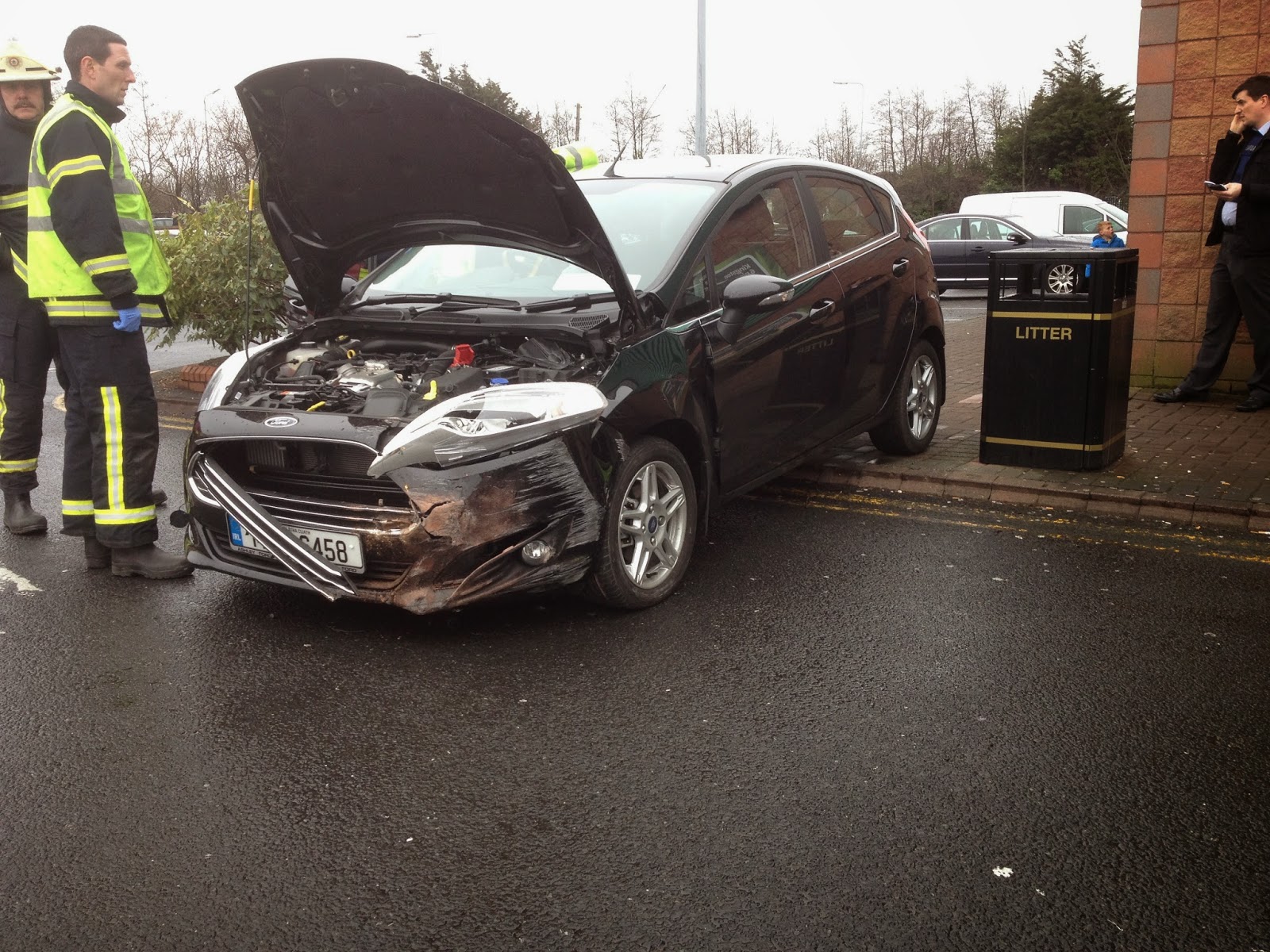 An automatic car an elderly lady driver..The car is less than 6 months old.
Thank God she hit no one.

Well here we are heading into Easter.
The year is 1/4 gone!
I am if nothing else a master of the obvious.

The dark hungry days of January and February have passed.
The time when people have no money after Christmas,New Year and the Sales clears out the coffers.
Quite a few taxi drivers go to Spain to their villas bought in the good days. I never had the luck to do that.

Every few days when  you think your luck is down or you feel like moaning you see something which brings you back to reality.
I was going past the convention center when I saw some people coming out so I pulled up at the taxi rank at PWC  Ding! Ding! a HailO job to Sandymount.
An ambulance had passed me and as we went towards the toll bridge I saw 2 ambulances and a fire brigade there.
One was the ambulance with a green stripe on its side it's the one for collecting bodies.
As we approached I thought that the bridge was closed, but no, the cars on the bridge were moving.
Then as we came to the ambulances and fire trucks we saw the body bag being passed to the morgue ambulance.
The poor sod killing himself on April fools day..
Good people falling into the hell of drugs.
Dublin has a very high number of homeless people and drug addicts. It is a shame and a tragedy.
Fr. McVerry is the only guy who makes any effort to help them.

Drugs have eaten the heart of our city, it took 2 generations and more have been taken out of the Buckingham St./Shirreff St. area and there is a big statue of a  torch erected there which remembers the hundreds who have died.
This was the first of its kind in the World

I have told some of my passengers about the blog and that I am writing a book.
It is very hard work, but it is coming on.
I let my wife and son read some of it and the "Junkie chronicles" shocked them to the the core.
But it is part of our every day life, we see it, we hate it and we can do almost nothing about it.

The movie "Taxi Driver" tells situation very well.
Anyhow if I tell you too much you won;t buy the book.


Anyhoo as they say in Canada

Have a happy Easte
Posted by John at 2:58 PM No comments: