A great day for the Irish

That thought of Mike came to me when the news broke the other day about a young pregnant mother and 3 young children died in a fire here in Dublin.
They had left a candle burning as it turned out.
It just shows how important smoke detectors are.

Things are hotting up here for St.Patricks day, Chicago has turned their river green and Niagara falls was also turned green.
Sure it will be grand on the day.

A guy crossing the road gave me a big grin and I remarked that the guy looked strange, like someone who had fallen out of a movie...It turned out to be Martin Scorsese, he had been given an award by Trinity college. A few years also I saw him in Fitzwilliam Square once before in the same place.
That time I didn't know who he was that time either.

So I was passing and she was desperate.
"My flight closes in 10 minutes, from the Omni center",
So pedal to the metal.
I broke 2 red lights and the speed limit.
Coming up the ramp at terminal 1 I told her to get the money ready so she could jump out as soon as I stopped.
She ran off and I swear she didn't even say thanks.
€9.50 on the meter
I counted the fist full of change €7.20

How could she have good luck ??

In memory of Mike

Mike wrote a blog, he was an native American Indian and an elder of his tribe.

He contacted me through the blog and we swapped wisdom.

This story is wonderful, its about what humanity should be. 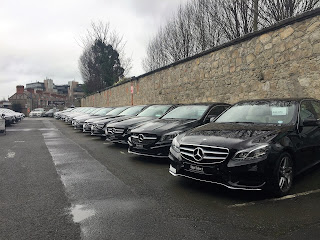 MSL motors in Ballsbridge,
A customer told me today that he went in to buy a second hand car that was in their yard.
He was told that anything in this place was out of his price range.
He is now on his 5th Merc, but he would not stand for that kind of attitude today.

The other day I had to bore a hole through a wall. A solid wall 2ft.thick.
The tool to do this is called a core cutter, it has a kind of a cup on the end of a shaft which vibrates and turns. Problem is it weighs 2 stone and the hole had to be bored 2ft above my head.
I can now admit that I am not the man I once was.
Hard enough to hold the drill above my head, but when it hit a stone it kicked like a bucking bronco.
But I kept going and got the drill back to Sam Hire before 5.pm.

Then on the way through Santry an African lady waved me down. I hate not to help people in trouble.
She was desperate.
From Rwanda as it transpired.
Where to ?
Airport T1 Quick !
She had 10 minutes before her flight closed!
So the pedal to the metal, after 2 red lights broken.

Quick have the money ready I said as we went up to departures.

She put a fistful of change into my hand €9.40 on the meter.

A handful of change into my hand and she hopped out.

I don't recall a big thank you.

But I counted the change into the coin holder. €7.20

I don't wish her bad
But tip the ones who help you.
Posted by John at 1:30 PM No comments:

Joey Dunlop an Irish motorcycle legend King of the TT circuit in the Isle of Mann and World champion many times over.
What did he win? Click here
So I took a 1/2 day off to visit the motorcycle show to see Joeys memorabilia.
Great to see it all.
When Joey was in Australia he was looking at a bike and the other competitor asked him if he would take it for a spin, so he set off at 200 mph +
The local cops stopped him on his return trip.
"Who the hell do you think you are Joey bloody Dunlop?" Asked the police man.
"Well I hope so" said Joey taking off his helmet.
"I want you to come down to the police station tomorrow at 5 pm"
"Are you going to arrest me?" said Joey

"NO ITS AUTOGRAPHS AND PHOTOGRAPHS FOR YOU"

Here is a video about the great man


And a story from a taxi

I had a lady who needed to have some repairs done to her harp, the guy tried and snapped something instead, she was not pleased to say the least.

The tram drivers went on strike and the bus drivers now want more money as well.
Money from the public purse is pumped into our bus company CIE and now it is crunch time.
Stop press, strike deferred talks to begin.
Well things carry on and such is life.

Ambulance drivers are marching this afternoon, they want to take off paramedics and just employ drivers. With this way of going you will be ringing UPC if you are having a heart attack.
The world is mad.

A lady in the taxi told me about how a madman chased her along the EastWall Rd blowing his horn.
She was on a bicycle and shook her fist at him and kept going.
Later on she missed her hand bag. She turned around and went back and retraced her journey to no avail.
Her kids had to be collected from school so she rushed home.
The delivery man from Tesco was there. She told him to leave it on the step as she had to go.
Just then the RUDE MAN pulled up and his daughter ran over to her with her handbag.
"God to think of it, he had driven to her house and left without a thank you, but he could surely see the relief on my face."

Sometimes you don't see the obvious try telling a lady that the coat is sticking out of the door and dragging on the ground,
Posted by John at 12:25 PM No comments: