Pissed and far from Copenhagen 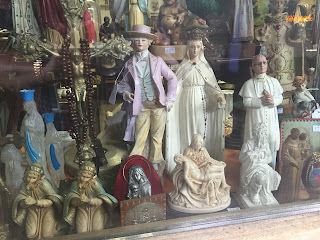 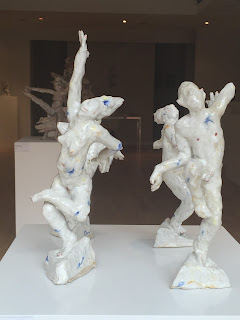 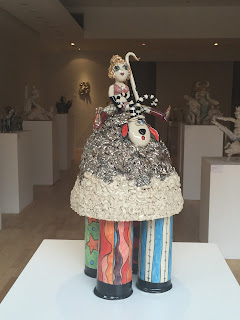 Statues from the Solomon gallery

Last night a taxi driver named as Martin Mulligan was murdered near Dundalk.
He was 53 years old and the Garda are investigating.
He was stabbed to death and the Garda believe that the motive was robbery.
The moment when this might happen to any of us is always present.

God bless him and keep his family safe.

Just a few words to fill you in.
I  have been plugging away as usual chasing my tail like a dog and getting nowhere.

A man got into my taxi the other day and he got me thinking that I really am a lucky guy.

I was passing into town past the Coachmans Inn and there was 2 guys waving down a taxi and I stopped,
The situation was a taxi drivers nightmare. One guy completely pissed out of his mind and the barman holding him up. But it turned out that he had missed his flight to Copenhagen and was now going back to the airport. He was gasping and fighting for breath and he was puffing at an inhaler as we went. He was coughing and getting no benefit from the inhaler.
I told him to relax and that when he got home he should buy an Aero Chamber which allows you to suck in the fumes without the "puff" taking you breath away and making you cough.
"It doesn't matter a damn I only have a year to live"he said.
I took a good look at him, he could have been a rock star, he was dressed like that.
He was younger than me too.

But why would anyone neglect a guy like this? Even an asshole like me could see that this guy had potential and a little bit of loving kindness would pay big dividends in the end.

But now today he was pissed and broke.

But he had a credit card. 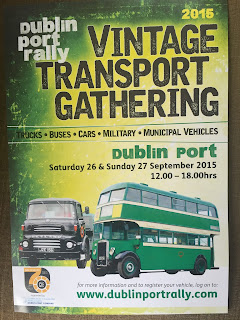 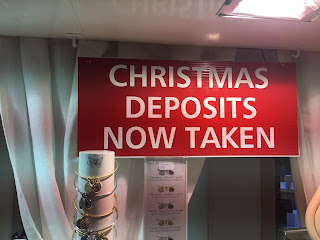 I told you it was coming 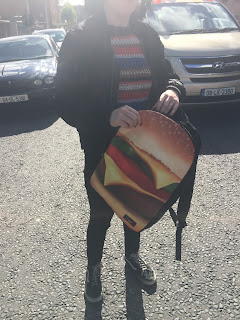 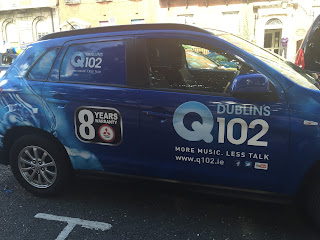 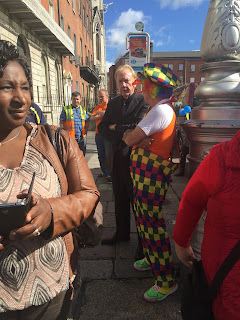 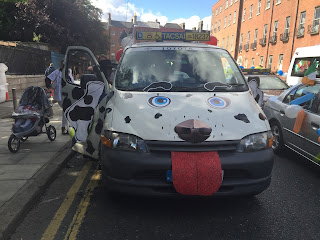 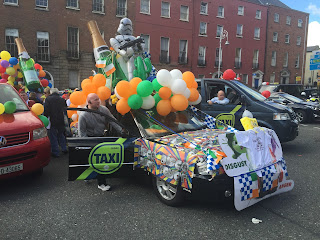 Well that was the big day out.
I went to the appointed spot to pick up my children only to be told that I was not needed.
So I went back to Parnell Sq for the start of the parade and drove down O'Connell St and then I went home.
I do hope that some kids were not left stuck with no taxi to bring them to the party.

Dublin beat Kerry in the all Ireland GAA football final and tonight Dublin celebrates with a big screen in O'Connell st and bands playing music in the streets.
I had a guy in the taxi. He had come from New York for the match he had €2,000 to buy 4 tickets.
The poor bloke he was a Kerry supporter.


Life goes on and the earth spins around the sun and next thing you know its Tuesday.

I met a wonderful lady going to the Rotunda (Our maternity hospital) She was from Oman and was an engineer.
I told her about a row I had with a Saudi man from the embassy one day.
He was a total asshole so I pulled the emergency stop cord and told him to get out.
In the argument that followed he told me that he would not get out and that it was no use calling the police as he had "diplomatic immunity".
One mistake I did make was that I didn't take him back and knock on the embassy door.
But we reached a compromise in the end and I brought him on his trip, then he apologized to me.
At journeys end he told me that I was an incredible man. "No one has ever stood up to me as you have done, I was wrong and you are a very strong person. Give me your phone number"
No way was he getting that.
I had another young guy going to the Saudi embassy a few months later and I told him about the asshole.
He turned out to be a very high up official in the embassy, he wanted me to come in and identify the guilty party.
I refused but he said he would take his staff to task and speak to them.

"After all we are visitors in your country"

So the lady from Oman said.

"In our country we have a saying.

THERE IS NO WEALTH WITHOUT MANNERS"


last week was world suicide awareness week, a big thing in Ireland unfortunately.
Many lives are being saved by simple advertising slogans such as
"Its OK not to be OK
Its good to talk etc"

Many taxi drivers have done different things.
Tony Roe has done a lot to divert energy and cash to the Samaritans etc and he could tell you a thing or two about hard times among us lot.

Remember the taxi driver who pulled up to drop off his passenger near Corduff.
An assassin had his passenger on his hit list and he pumped 7 shots into him through the door.
The driver was not hit, and the guy was dead.
But he was traumatized by the affair and he couldn't work again and he nearly lost his home as the bank didn't care and wanted to be paid for the car..
Well Tony got him a few grand,,

He has another fundraiser coming up soon.

The trees are turning. 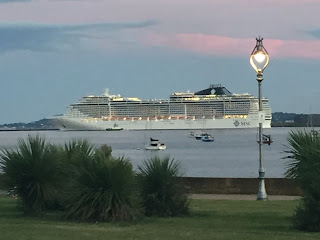 This is one of the biggest cruise liners in the world, it had to back into the port as it didn't have enough room to turn around. 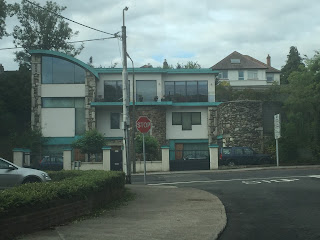 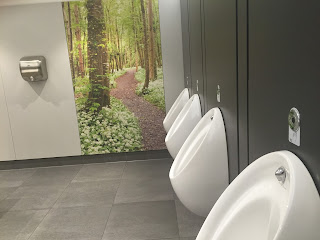 Wow!What a rest room ! So different from the Kesh. 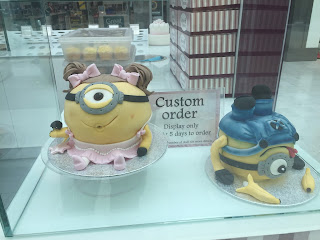 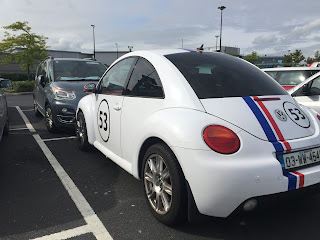 Herbie!  Is that you?
I have been neglecting the blog for a while, that income tax took a lot out of me.
I do many other things apart from driving a taxi and it all has to be accounted for.

Did you hear the one about the taxi driver who became a stand up comedian?
One of his pals told him to declare his new found income to the tax man.
So he rang them.
"So you are working as a comedian and you are getting paid?
Make a list of all the gigs you did and how much you got.
Then make a list of your expenses, mileage, food, and hotels etc.
Add it up and subtract your expenses from your earnings and
Send us a cheque for that exact amount"

The really funny thing is that some people think it could be a joke..

No I don't resent it a bit. We have to pay for the really efficient Garda, like the one who told me that it was OK that a guy stepped out of the taxi owing €20, "Whats all the fuss about?"
I bet he wouldn't say that to a big store owner.
Or the other genius who let a Romanian gypsy walk right past him as I called to him.
"Stop her, she hasn't paid"
As she walked past him he said.
"Did you make a report?"

This year I am going to photograph Garda's ID numbers and record conversations, and make written complaints just in case something might be done.

I had a guy to the airport the other day.
He had taken the wrong suitcase from the carousel and was now going back to find his case.
With so many cases coming out why he didn't put a few ribbons on the handle is beyond me.
He assured me that he travels all the time and that this was a first time for him.

Dublin progressed to the GAA football final and Kilkenny won the Liam McCarthy cup for hurling.

A game of great skill..Take a look.
d

We had visitors and a huge tidy up and now I can find nothing.

Say a prayer for Euron my Chinese friend he is very ill with cancer.
He is around 35 and with Judy his wife they have 2 great young kids.
Brain tumors suck, perhaps a few words with a few Gods will help.

Makes you happy that you have only small problems.

An awful death fleeing from war.

Well here we are in 2015, thousands of people trying to flee from war to sanctuary.
The poor man who lost his wife and 2 beautiful children has shamed the world when they died trying to cross over to Greece in a rubber dinghy.

They had tried for visas to Canada where they had family but were refused.
If there is a God I hope he will soften hard hearts.

Bob Geldoff has offered to put up 4 family's in his properties.
He is on tour at present.
But fair play to him for the offer.

We become detached when we look at things through television,
"not really happening, nothing to do with me"
Yet in fact we could start to care.

Looking at things going on in Iran where a woman who is raped is told to marry the rapist.

In India a man ran away with his neighbors wife recently.
The punishment was that his 2 younger sisters will be raped in public.

I kid you not.

So some things we cannot change, from tomorrow start in your own corner.
Posted by John at 2:44 PM No comments:

So I turned up at 15 mins to midnight with loads of other people.
The sign read " Doors are open at midnight"
We waited and just at midnight the door opened and in we went,
He shouted orders. "Who is for 10 past? Who is for 20 past?" etc.
I was called up and handed in my papers "OK you need to pay €60"
I know I had paid something when I booked it, but who wants a row at 1/2 past midnight.
Credit card, fee taken.
"Next please"
Now this is where I failed my test.
The next guy came up and he handed in his papers "€60 please"
He had no credit card, so he asked if he could go home to get it.
"No you have an appointment time for 00.50 and you would be back too late".
So he had to go away and loose his booking deposit.
I had an idea.
I went out after him and asked him if someone at home could send him the number and then he could pay. He tried it but the guy at the desk told him he had to have the card there in his hand.
So he went away!!

Now I failed badly....I should have presented my card and asked the guy to pay me back later.

Why didn't I have the balls to do it?

A few months ago I picked up a girl from Venezuela going to the airport.
Off to Portugal to surf the big waves.
Every detail is still in my mind.

When we arrived there she went into shock.


"My sister has my wallet and cards I gave them to her at the checkout.We must go back to get them"

I had done a good deed, problem solved, no problems about this in the future ?.
I rang her sister at 10am. no reply, at 12am the same and at 5pm and at 9pm when I last rang at 10 pm
I sent this text.
"Yesterday I saved your sister from missing her flight!
I could have brought her back to you and then back to the airport adding €50 to the taxi fare.
I didn't do that,
I thought of her welfare and now you think it is alright to shaft me for my money.
I hope there is a God"

The next day she texted me back explaining that she had a flat battery and then paid the exact cost..No tip.

I would never shaft the good Samaritan.
But somehow I am disappointed in myself in not helping the guy