Baby you can drive my car 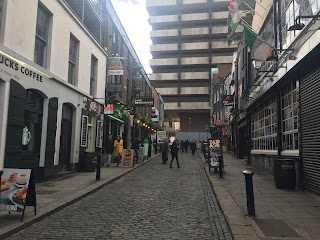 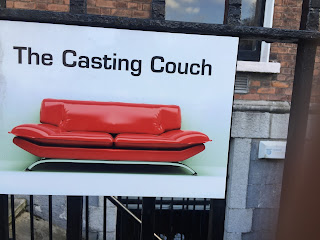 Reading about the taxi drivers in New York lets me see that things are not so bad here at all.
The NY medallion was once valued at over $1million now it would be hard to get half that for a medallion now.
The Yellow Cabs sit in their yards as the drivers who used to hire them now drive for Uber.
The punter is happy as there are more cars available and they come quickly...But not all is that good.

When I took out my taxi license years ago I had to have my past vetted by the police, then I could apply to proceed to have my knowledge tested.
Then I got a PSV permit .
Now to get a license for the car took another few leaps and twists.
Once valued at £90,000 in old money our system changed to make a taxi plate worth £5000
Then you couldn't sell or transfer your taxi plate so things got worse.

But I am sure you don't want to know about that.

So for Uber you drive on your own insurance until someone hops in and Uber takes over the liability.
Or do they?
Google it to find  Uber horror stories..

Even today a British rapist taxi driver who was guilty of murders as well as many rapes was about to be released on PAROLE but after a fuss was locked up again and people in the parole board have resigned instead. It was a close call. He was nearly out. His name was Warboys

So you have to be careful, you yourself know best of all.

A real diamond of a woman stopped me, she had a zimmer frame walker (With wheels), going to Inchacore.
She was a dealer (Not a drug dealer) on the street. Told me about her daughter in Jameses St hospital dying from cancer, 41 years old.
"Its hard to be cheerful, but I have to visit her"
She was a true diamond and when I took out all her stuff she handed me the fair.
"Look son, take this
be lucky.
Buy a lotto ticket"
She gave me €2 extra with a beaming smile.

God bless her and all who belong to her. I hope her daughter dances at her next wedding.
The Dublin people are made of great stuff.

On the other hand I won't be bitter and write about fancy travelers in shiny suits who ask for a €40 receipt for a €35 journey then ask for their €5 change  etc. etc

I wish I could distill the happiness that my customers exude!
That would be awesome.

At this time every year my mind returns to a very rude English couple going to the airport on a Sunday morning at the Conrad Hilton hotel.

This couldn't happen today as technology would not allow it to happen.

So we were on our way and the woman leaned forward.

"Your driving us round ta ouses!, just take us to ta da aiport"

No point in giving her an argument! She knew it all.
I drove with the radio on low while they argued in the back.
They sounded like a cement mixer with gravel in it.. If you know what I mean.?

So at the airport I pulled out the suitcase and with the correct change in my hand I straightened the handle.

"I hope you left enough time for your flight ?"

"Corsre I ave ya fucking moron"

"No! that change on the clocks fucked up my whole day"

"The clocks, they went forward last night! Its an hour later now"
It took 3 seconds until his demeanor started to shrivel up.

He had missed his flight....

My God! Such a girl from Brazil with the most beautiful face and smile, a budding film star, or so she told me.
No I won't show you her photo from the dash cam but she was indeed very beautiful.
She was going to the cinema complex on Parnell st and at €15 she stopped me on O'Connell St  she had no more money.
I still brought her thinking of that old Beatles number

"Baby you can drive my car"

The world is on the point of going green. St.Patricks day has come around click here for more information.

I finally took the day off and went to the barber and took a look around the city by foot.
The city is changing very fast, a lot of beggars and junkies around. Its a pity that the powers that be won't do something to help the unfortunates.
There was a girl of around 20 years old around Pearse St. sitting on her school bag her head on her knees.
The poor kid was really suffering and I wished that I knew of a way to help her.

That evening I picked up a guy at the James Larkin center an outreach center i Ballybock.
He had been through the mill himself and was putting in time to give something back.
So I got the outreach number and the number for the center as well.
He was doing security for a movie last night, he also told me that he would love to be an actor.
I think I might know someone who could give him a leg up to fulfill his wishes.
That would be great.
So all the way to Ballymun with no charge.

A little female soldier from New York in the car looking for a car hire near the airport.
"Ace"
I never heard of it and we drove around the different car lots asking, Then she gave me the phone number.
"Turn left at Keyleys" down that road there was no signs for the place. There was a big Eurocar place and another one internet hire. I went in there and there on the back wall "Ace car hire"
So she then had to drive the car back into town to pick up the rest of her crew to drive to Kilkenny.
Not a great plan as the drive back in would take its toll on the nerves.
Better to have all come out together and traveled on from there.
Only a suggestion, save the time and the frustration.

If you plan to travel and hire a car use holidayrentals.com we have used them many times without fault.

There is a sign at the bus station "Airport €20"

So I was bringing 3 people in the mad Friday traffic to the airport for €20 !
I had the meter running €26 with traffic.
One of them handed me €20 and I gave her €10 change
Then the other couple offered a €20 to the other girl.
I was lifting out the suitcases and I heard "I will square up with you in the terminal"
I got into the car
The truth hit me and they were gone...


What do you think could I really be living in a house on the edge of the twilight Zone ?
Doing a big tidy up the other day in the bookcase up pops an envelope put away in 1991 to be found now in 2018
£490 old Irish pounds traveled through time to be found again.
A Polish guy told me the "Old money" it cannot be exchanged.
But in Ireland it can.
So its back to the central bank with my passport and bank details.
They won't just exchange the money.
You have to wait until it is transferred to your account,
Still money is money.

I am waiting for OIL, we just about ran out and he should be here soon.
We couldn't be bothered to change over to gas as you get a bill every month whether you are using gas or not.You only pay for what you use with oil, no monthly charge.
The wood burning stove that we installed a few years ago gives us an awful lot of heat, then with using old pallets for fuel it costs nothing to run.
Business is picking up in the taxi in comparison to other years. Time was 10 years ago you would be better off going to stay in Spain for the heat and the rest as there was no work here until St.Patricks day..
More than 800 taxi drivers left the business last year, whether it is the economy improving or the falling income I cannot judge.

A really interesting lady from India the other day.
She was an artist had just arrived here and was looking for a sim card.
Most phone shops don't open until 11.00 !!!!!!!!!!!!!!
Then she had to go to her solicitors on Ushers quay.
She had a great wonderful happy laugh. Then she showed me some of her paintings on her fone. They were really good for sure.
I am sure that I saw them in the Sunday Times a while back.
Then she said.
"You are a very interesting man and great fun to be with.
I really enjoyed your company.
You are very handsome in spite of your age!!  "

My balloon went with a big bang.

I am taking all day off today..  much work to do here in the house. 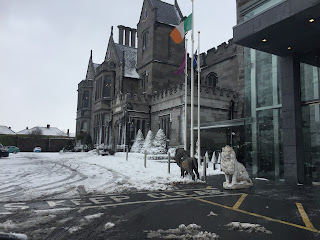 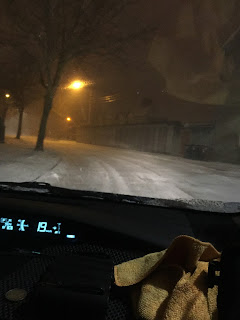