And how was it for you?
Bizzy bizzy for nearly everyone.
It is amazing how people migrate right across the world for the festive season.
One little girl in the taxi was heading across to Israel, the site of the happening.

Hotels and restaurants were flat out doing special dinners for staff outings.
If people thought about having the staff outing in mid January on February the restaurants would give them a much better deal.
As for travel you could go later at half the price.
But all creeds have their festivals and travel is a big part of everything.

Christmas day is a day when I go out and do a few jobs. There are a good number of poor people who don't have cars and they are going to visit graves and grannies who enjoy the special day.
On St.Stephens day on the North Circular Rd a row was going on and the entire belongings of a girls life were strewn across the road, I drove into a filling station and bought plastic refuse sacks.
My plan was to load the things up and take her to Apollo House which has been occupied by homeless people.
Just as I was coming back I got a HailO call, a short one so when I arrived the situation had cooled down. As I looked over a police car pulled up and though there was still a good bit of personal belongings strewn around the Garda stayed in the car for a full minute before driving off.
I know that there are good police, but the useless ones need a good kick in the arse.
Another came down from the direction of Mountjoy station, turned down the wrong road and was gone.
Then the girl came out and she was in a hell of a mess, crying and showing her midriff and no coat.
No words were spoken apart from the destination "Christchurch"
The kid was not much more than 16 if she was even that old.
I told her to keep the taxi fare the man had given her and I hope it didn't go on drugs.
I had a son who went wild. He was much younger and it took a few years to get him help.
One "Family therapy group" told us that we were worrying for no reason, he was a city boy and knew his way around. He really took charge then.
I went back to the therapy group and offered to take them around the city between 10 pm and 2 am to show them what goes on.
They declined.
I then asked that a more senior person look at the session to show them how they had undermined our authority.
A 14 year old person should not be running wild for 2 or 3 days at a time.
Strange to say that session "had not been recorded"
A prison officer and youth worked spoke to him for 3 hours, no change for a few days then he worked his way back to us.

The other video of Gerry Lynch is gone
Here is the man himself.
No doubt that song will bring a tear to many en eye, from Gaza to the Bronx

Must be Christmas time

There is no stopping it now. Only 6 days to go.

I find it all a bit much, people drinking too much etc.
In the papers I read of 2 cases involving murder suicide involving children.

So from now on we will all start to make the world a far better place by starting in our own corner and working outwards.

Driving as many miles as I do in heavy Dublin traffic I have to be lucky all the time.
Like winning the lottery every time I buy a ticket. But we cannot afford to mess up.
Coming from Shirreff St through the 5 lamps I took the inside lane to turn at Killarney St.
A cop on a motorbike stopped me and read the 20 questions, pausing to say to my passenger
"What are you smiling about? Theirs a €60 fine for you for you for not wearing your seat belt !.
Then he asked me how many years I had been driving?
A move like you just did..BANG and your no claims bonus is gone.
"Cop yourself on "
He jumped on his motorbike and was gone.
He had made his point and all the cars who had seen what happened were gone.
Lucky day.

Then on Sunday I drove for an hour for nothing and was turning for home when I was hailed from the street in Ballsbridge.
Ashbourne (A €50 job) A wonderful tired lady going home.
Then when I turned for home again I decided to go via Swords and I turned on the HailO app and bang I got a job to Dublin Airport.
Then I headed towards Northbrook and I got 3 lady's and a guy heading to a town further on than Manooth ! The girls were in pajamas and dying and the party must have put the dying days of Sodom and Gomorrah in the shade. One chided the other about who she had slept with the night before.
I won't fill you in but when we arrived at the store at 12.30 (Which was supposed to be opened at 11.00) A large group of men were assembled and photographed the girls in their pajamas as they got out of the taxi, the waiting men cheered and took photographs.

A handy€100 + in an empty few minutes
Still if you do not make money now you are sunk for the period after Christmas where there is no work.."The herring days"
Not much else to report except that I was almost home when a Phillipena girl asked me to to take her to Ballsbridge for a job interview in the Intercontinental hotel.
She is illegal, been here 5 years.
Imagine not being able to go home knowing that a tap on the shoulder might come any day and you would be kicked out.
Trump needs a good kick on the ass to make him see sense as well.
She rang me later, she got the new job !

OK I don't know how to move this out of the way.
On this day 1980 I was working in the international telephone exchange.
Suddenly the word came out "John Lennon has been shot"
Total chaos.
Guys in the know rang their mates in TV and the press.
This is how things were back then.
No mobile phones etc.I was one of the first people to hear about Chernobyl !!!

So we remember you John
Happy Christmas

Nether a borrower or a lender be


So sorry for not keeping up.
Work is picking up and I am slowing down.
I should have taken a few weeks off in Sept October.
God there has been a heavy death toll on the roads over the past few weeks.
My own son who lives in Northern Ireland spun off the road on black ice and wrote off the car.
The children were not in the car at the time and only his pride and his wallet were hurt.
At least he didn't buy another Vauxhall car to replace the one he lost.

I had my brakes done, new discs and pads. Headed down the road only to find that I needed double the distance to stop. Brake pads and new discs need time to bed in.

Workwise things are going strong.
There was a really great girl in the taxi from  the Czech republic,
very stern on the fone she was, giving out like mad.
"I am sorry that person owes me money and I go to get it back."
I told her what my father told me.
"Never lend money to anyone! If they cannot take care of their own money they will loose yours too"
She paused for a minute.
"You have a wise father"

Little things about her told me that she was a hooker with a really big heart.
She got out and after she paid and tipped me €3 and she blew kisses to me from the footpath.
It would be great if her life turned around. She needs a big brother.
I have never had a bad experience from a lady of the night.
If you respect them as normal people and don't judge them they might just surprise you in the best possible way.

Today it is 17*C like summer. Warmer than Spain.

I must start keeping a note book and recall more information next time.
Posted by John at 3:12 PM No comments:

A brand new place to visit 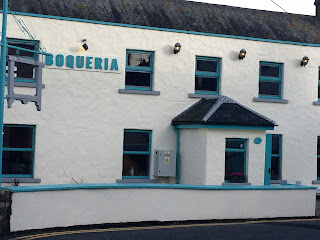 Howth village has an exciting new venue and if you want to take your better half out this just might be the place. Its new so take advantage now and go now before it gets really busy.
Boqueria is a new restaurant, it is a right turn just after the port then up past the garda station.

Then listen to what the chef has to say.