Its a hard job and you need to be lucky 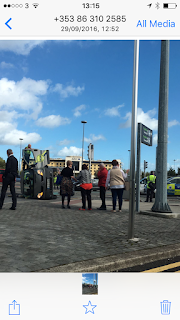 A taxi lies on its side at T1 at the airport.
It will take the driver many months to pay for this.
I hope no one was injured 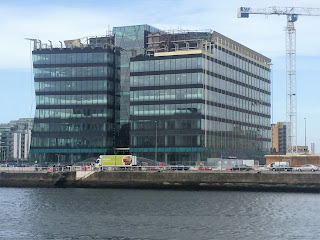 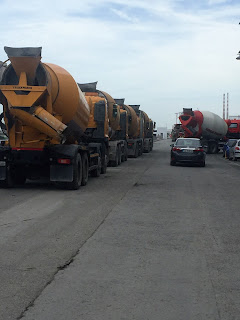 A line of cement mixers wait to unload 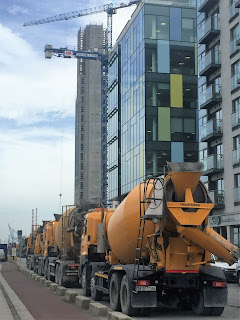 Dublin's first big skyscraper rises up from the ground. 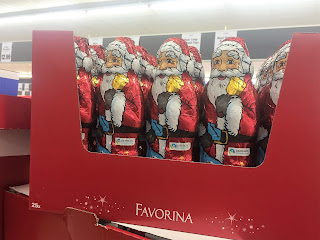 Its not even Halloween and they have arrived.
I may be wrong but the shelf space that they occupy could be selling other goods.

As I sit here the negotiations proceed between the bus drivers and CIE whether to go on strike on Saturday or not.
Whether they work or not I see a big solution on the horizon.

Guess what? Privatize the service!
The strike action has been suspended for now.

A very interesting lady in the car who works with film companys she tries to get them to make movies in Ireland and she swung it for Star Wars to be made here.
She knew her stuff all right.
"The problem we have is with electricians and tradesmen going on breaks instead of working to deadlines in cooperation with the movie".
I can help her there as I know a few well qualified lads who lost their shirts in the crash.
She had done the tour of Glassneven cemetery and had a few interesting things to say.
Do you know where the expression "dead lucky" comes from?
A lady in Skibbereen was buried with her jewels and robbers dug her up and when they tried to cut off her finger she woke up!!!!!!!!!!!!11 She was really dead lucky.
Her tombstone says "buried twice died once".

Then "Dead ringer"
People who were afraid of being buried alive would have a bell put into their coffin.
If they woke up the could ring the bell.
Dead ringer.

I wouldn't have minded driving her a bit further.

Here is a video of a guy with mental problems
John Healey he wrote about his life. He was never paid for the book and threatened to kill the publisher.
Beatrice Coogan wrote the big wind. She had to take the publisher to court before being paid..Tim Pat Coogan her son told me that the pity was that she never wrote another book, but they were in her.
and here is the film about John Heeley.
Put on the kettle..its good

Ready to rock and roll for another year

Your taxi license has to be renewed every year, to do this you have to get a tax clearance cert,Then the car has to do its NCT test then you get it passed out if everything comes up to the mark.
It all adds up and in the middle of it all the bank stopped my credit card. "Unusual activity" .
I had to go over all transactions over the last 6 weeks.
By the way if you are going abroad tell them, I had my card stopped in New York and its all cards there.

But I know that there are fake taxis around, we have an app here in Dublin called "Driver check"
You put in the reg or the roof sign number and you get the driver details. Often it comes back blank, or a completely different driver.
In the good old days one enterprising person cloned his car 30 or more times, they were rented out.
They were all lifted and brought in to Dublin castle yard.
The brains behind the operation fled off to Spain as far as I can remember.

As far as I am concerned anyone driving a taxi
MIST BE VETTED BY THE POLICE AND HAVE A PSV LICENSE,
For everyone's safety.
In Spain you have to have lived there for 6 or so years. Have a crime free background. Be fluent in Spanish and have a full Spanish driving license, then you do the taxi test and off you go.

If someone is driving a taxi and he is not the named driver or is not qualified to drive a taxi he should be taken off the road and arrested. Then the car should be crushed because it was not being driven by a qualified driver therefore it is not insured for purpose.
In England they are still in shock about a taxi driver who may have murdered 8 women.

I don't want things to get any worse than it is already.

I had a customer whose sister was put into hospital and her partner finished up in a coma for 6 weeks,the car crashed between Sutton and the Airport at Christmas time , the driver was foreign and knew nothing about driving on ice.
The girl told me that they never got a penny as the driver was driving his brothers taxi.
But I know you can claim from the insurance beuro.


Here is a video, get a mug of tea and watch it all.
Its really good

I was in the Netherlands 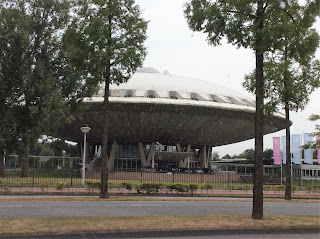 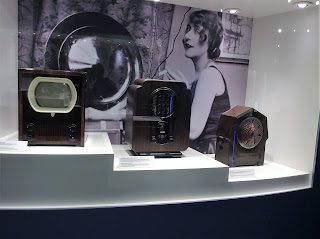 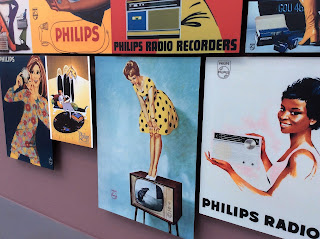 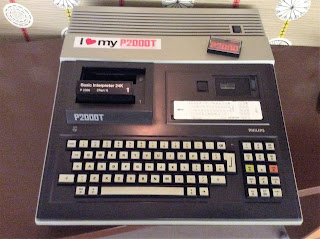 I was in Holland for 2 weeks, for the second time in 6 months, missing the bus strike and the bad weather.
Eindhoven  is where Philips grew and employed thousands of people.
The products they developed were life changing.
First in the world with many products.
Then the bean counters came in and sold off all the wonderful ideas and left the shell that once was Philips.
That's life as the French say.

Things work well in Holland. When you consider more than 1/3 of the land is under sea level.
The network of canals and dykes which keep the sea out is amazing.
The people are slim and tall, many of the young people are 6ft 8 or 9.
The Dutch went all over the world to trade even the name New Zealand comes from the Zealand sea.

So tomorrow I must pass out my car and renew my license. 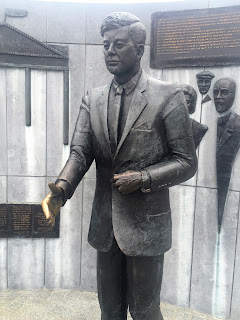 JFK Will greet you from his statue in New Ross 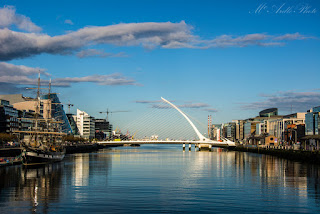 A fine photo (Not mine) 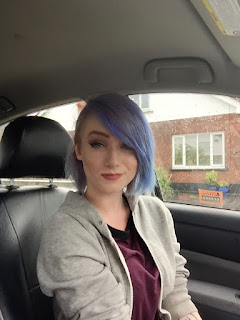 This young lady is a rising star. Her name is Aoife McAuley Stamp and her band
Identity Theft can be found on Facebook  and YouTube 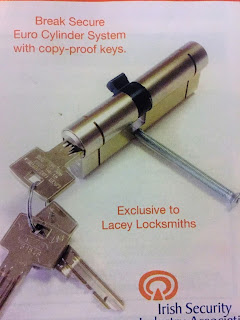 This is the new lock which prevents the robber from snapping off the front of the lock.

not that much going on but a really interesting person got into my taxi on Sunday.
She was going 75 meters, still a job is a job.
Did you ever see someone who had spent a fortune turning back the clock?
This was her, no facial expression what so ever. But she hadn't had the lips done.
So at journeys end the fare was €4.10.
She looked and looked. I had come around to help her out of the car and in her handbag I saw something that I only noticed many years ago. A lot more than €2 million  in her bag.
One inch thick wads of €500.€100. €200 and €50s
I told her that we should go to have a god time. "Its not my money" she said.
Madam I am an honest person, for Gods sake get a money belt, don't carry cash like that in your bag, split it up into different pockets.
When I helped her across the road I noticed that she had the most fantastic pair of breasts that you could imagine.

It is really sad.
This has to be hot money in the hands of a very ill person.
If she looses it she is dead.
If she delivers it the operations to turn back time continue.

The last time I saw that it was an Italian girl and her whole face had reacted to her surgery.
She really frightened me,but you could see that once she was really very beautiful. She wore a huge fur coat with a hood which was probably worth more than my house.
I remember telling her that I hoped that things would work out.

Vanity is an awful flaw.
Posted by John at 3:00 PM No comments:

We all remember where we were on that awful day when it happened15 years ago today.
We pray for the dead and the injured.

Yet 15 years further on we still do not fully understand what caused all this to come to pass. 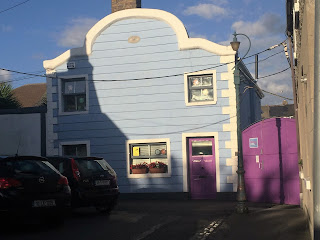 An interesting house in Rathmines 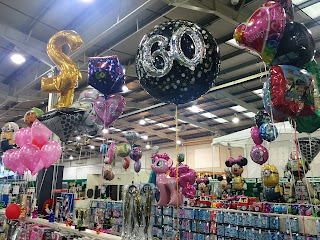 Balloons for all occasions 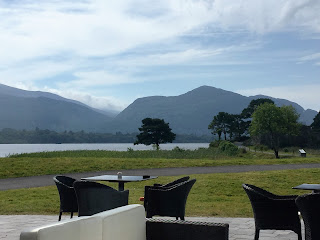 I hope you make it to Kerry some day

Taxi drivers make their fortune at other peoples misfortune.

The buses are on strike from 9 PM tonight.

They are off  tomorrow for 48 hours, its tough all right.

But if you lived in France you would know all about strikes.

Today I picked up a Brazilian girl going from James's St to St Vincents hospital a journey of around €20. Brazilian people are always happy and she was no exception, a great talker and a pleasure to be in her company.
Nearing journeys end I asked her if she was a nurse in the hospital, she said no that she was visiting her doctor.
She has had rheumatoid arthritis since she was 9 years old constant pain and stiffness all her life. With no cure in sight.

I have good health and no sign of that changing.

Thank your God for the little things.
Posted by John at 5:13 AM No comments:

A busy weekend ahead 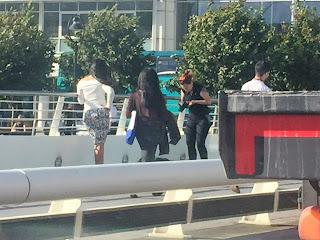 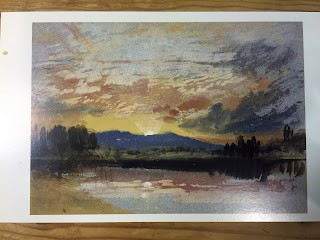 This morning in Dublin at 5.30 am God produced a sight for me.
The sky had more than 1000 colors and the sky was what they call a "Buttermilk Sky"
Turner painted sunrises and sunsets, the picture above is one of his.

Perhaps there is a future for mankind.

So the weekend brings Electric picnic Then American Football Georgia College and Georgia Tec
Well if that was not enough already we have the All Ireland hurling final.

I went for my car test but it failed because of a faulty CV joint, it is fixed now.

So on the other hand Apple they reckon owes us €13 billion in tax.
No No No the government says we will appeal the judgment.
The clown that allowed Brussels to crucify us when the banking crisis came have once again been proved as a shower of idiots.

"This country will never prosper as long as the people who live there continue to elect the village idiot to power".
He is right.
They are all a total waste of space.
Posted by John at 3:25 PM No comments: