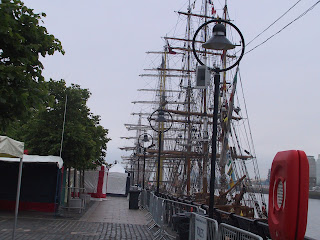 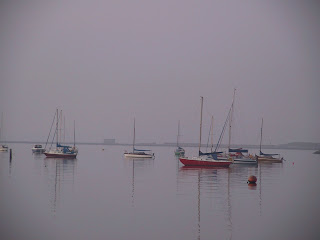 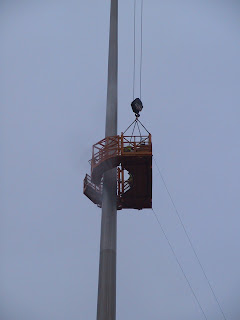 I hope the photo of the boats off Clontarf came out well. 5.45 early morning mist they looked good anyhow.Click on the photo to enlarge it, its OK.

Last weekend the spire was cleaned. the cost? e100,000.
All this for a structure that is supposed to be self cleaning. AND it will have to be cleaned every 18 months from now on. Wow what a waste of money.
Think of the prisons you could build with that money. Or the drugs treatment unit you could set up.Or even the homes you could build.
It has come up with a matt greay finish anyhow.
I am not happy but no one cares.

What else is new?.
I have started working the all nights again. Thought I would loose the temper picking up the drunken headbangers, but no. Perhaps I have mellowed or maybe I can spot the troublemakers a bit better.
Still the money is better and you are not stuck in traffic with someone screaming "my plane is in 20 mins".
One cure for that kind of hysteria is to pull in and turf them out.
"Health and safety, the unions would'nt let me drive under such pressure"
Works a treat.

Last weekend the town was hopping thought the weather was bad in Dublin.
East coast bad /rest of Ireland SUNNY.

We had the Docklands festival and tall ships came in from all over. The rain was awful though and the people who rented stalls must have lost a fortune.
Still rain makes money for taxis.

Dublin played Meath in the football which meant that 1/2 the taxi fleet took the day off so with the Nightlink buses not running on the bank holiday and more than 1/2 the taxis off the road it was great. I will not boast but a few more good nights like that and I will take a week off.

One fare I got was over e60 into the heart of Wicklow, the scenery was stunning at 7.am and I took the old back roads a good bit of the way back to the city.
Wicklow is known as the garden of Ireland.

I met a diplomat from Eritrea, interesting man. Told me of the history of the country,16 years old,broke away from Ethopia.
They do not accept foreign aid because such aid comes with strings attached. "How can you tell a farmer to grow food if someone brings free food into the country?"
We produce 90% of our own food. Next year we may have food to export.
My usual line on Africa concentrates on the famines and the madness that is going on in Zimbabwie and Mugabie. "John, I concentrate on what I can fix. Not what is beyond my boundaries.Africa is full of great people and corrupt people. The good must win, or there is no hope for humanity. You must believe this"

The other guy I met yesterday evening. Outside the Egyptian embassy.
Turkish or Egyptian? I said (The embasseys are together) Egyptian, a great guy an optemist! The glass is half full. Not half empty.

He was the biggest cattle exporter in Ireland.
"Then BANG mad cow disease.
I was wiped out, in a day!
Can you imagine this?"
What do you do now?
"Fitted Kitchens"
Well at least they don't shit! said I.

It is a pleasure to be in the company of such people, a pure education.
Learn how to live!

On Baggott St.last night the ladies of the night were being given a hard time by the Garda.
They want us all off the streets said one.
Tough shit.
Most of these vice girls are heroin addicts or they would not be out on the streets in the first instance. You would thing that the Garda were trying to curb a bad habit like smoking or picking your nose in public.
A lot of thought will have to be put into this problem, but it is said to be the worlds oldest trade.
Sad to say a lot of them are HIV positive as well.
So you have one problem within another one.

Locking them up or moving them on is not the answer.

There was one girl who told me how the cops used to collect them to entertain them at parties, then one day in a spiteful rage he arrested them and banged them up.
They can do what they want and they do just that.
Some taxi drivers hold their money when they are working. Joe public often think that the taxi drivers are selling drugs to the girls, nothing could be further from the truth.

The foreign girls are brought in to Ireland by their owners and operate from apartments through the city. The internet are the new "streets" where they ply their trade.I don't know if bribes are changing hands but this old trade with its new spin is very sinister to me.
I carry links to sites which try to explain it better than I can(on the right) and believe me
"The truth isn't sexy"

Something to watch for.
A meteor storm coming on 13th August between midnight and 4 am. Mark the calender and go away from the city lights.
This is supposed to be a great display.
I don't know if it will be visible in the southern hemisphere

So go "Catch a falling star and put it in your pocket"
Posted by John at 9:27 PM