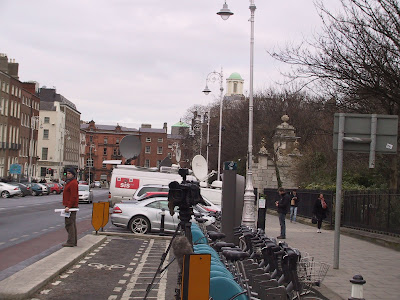 The worlds press beams the news into the sky "Tiger dead!" 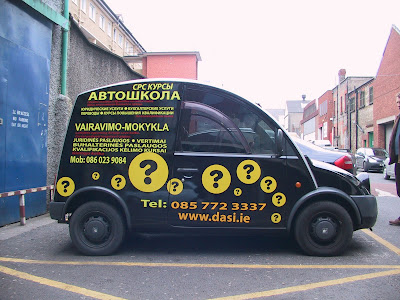 The Russians are here. 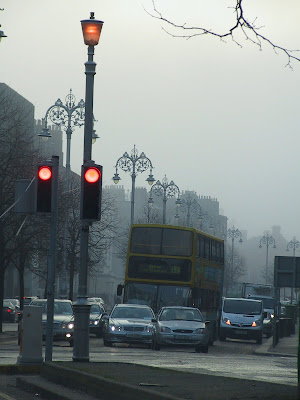 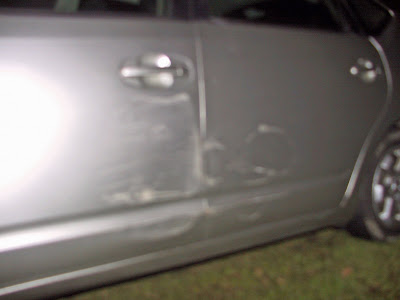 Ouch that hurts me!

Well here I am sitting at home.

I had my car touched up and sprayed to get it ready for the annual testing it has to go through to be a taxi. Then I CLIPPED a pole which I have passed by a thousand times before without hitting it !

I am listening to a guy on the radio who was talking about his restaurant closing.
He had a "Rent upwards only" clause in his rental agreement, a common enough thing.
Which means that no matter how bad business is your rent must go up.
A guy on the radio who opened a restaurant in Ranelagh called Eden, he invested and started to build up his clientele, then the recession and a rent review came along with a hefty rent increase. No matter what he did he could never match the falling sales and rising rent. So he tried to talk to his landlord, who would hang up the phone on him. Then it went to court and he handed back the keys and broke the lease.
Today 3 years later the premises is standing empty with no rent coming in at all.
The landlord has obligations to the bank as well.

Everyone has to accept that things can't get better unless we talk, Kathleen Doyle the taxi regulator please take note.

A guy from Romania who has been working at property maintenance here for 10 years told me he was paying €1200 per month for a 3 bed house, he had painted the house inside and out while he was there. His landlady was going to put up his rent and he asked her to reduce the rent instead. She balked at the suggestion, even though he provided her with print outs of rents in the area. He told me that he had never missed a days rent and payed in time every month.
So he handed in notice and moved out. His new rent is €800 per month, a better house as well. His old landlady had to buy some new furniture, get the house painted and go advertising. She started off by looking for €1400, then she dropped the price.
When I spoke to him the house had been empty for 4 months and the rent was now set at €800.
So she had lost 4 months rent which she can never recover.

A couple with 2 good jobs married in the "Good old days" Each had their own house which they rented out and bought a new house to live in together.
So they looked around and bought a 4th house to rent out. Every year they geared up the mortgages based on the rising value of property. The loans were "Interest Only".

Then one fine day when the sun came up and the Bank of Scotland Ireland asked for a full valuation of their property portfolio. Guess what?
Negative equity !
So the bank said "Reduce your debts, sell one property" The property that they decided to sell they valued at €650,000 hoping to sell at €600,000. As time moved on the debts rose and as they dropped their price they began to see the extent of their problem. When the house was sold it went for €320,000. Now their property portfolio has halved in value, most of it purchased at the height of the boom. The bank, so willing to give money have now placed a repossession order on the family home.

One lady I met had a flat wheel on her BMW and I offered a help to change the wheel.
When I was finished I went to get baby wipes from the car.She then told me that the house we were in front of was hers and brought me in to clean my hands.
The house was bigger than Ozzy Osbournes and I said that I half expected to see him stagger through the door any minute.
"Things are not quite what they seem. We paid 1 1/2 million for this house, then we spent €400,000 on materials alone doing it up, my husband was a builder. Then when it is all finished my husband walked out leaving me and the 5 kids and a colossal debt. The bank of Ireland Scotland are going to evict us as soon as they can."

Her next sentence still amazes me.

"We are going on Holiday on Sunday, Can you bring us to the airport in your taxi?"

I declined she would need a bus for 6 passengers and luggage.

If you were about to loose my house would you go on holiday?
Me? I would sit down and talk with the bank instead.

A banker is a person who gives you an umbrella when the sun is shining, than takes it back when it starts to rain, remember that.


Grafton St has plenty of empty shops, If you want to be shocked go to Drougheda, the center of the town is boarded up, the St Lawrence shopping center is a monument to the folly of the "Celtic Tiger years" One unit after another empty.
You see one problem is that our taxes on goods are higher and we share a land border with the UK, thousands of people go shopping in Newry and other border towns.
Someone should say "Lets reduce VAT to the same UK level and get less tax from a bigger turnover instead of loosing it all to the Queen of England"!

One guy who is a printer told me that tax forms used to be printed by his company, then they found out that they were going to be printed in Northern Ireland where VAT was lower.
So what did they do?
Well, they opened up an office in Northern Ireland and exported to themselves, getting the taxi back on exported goods, then they put the lower UK tax on the goods and re-exported back to the republic. This "Saves" the pen pushers in the government thousands of Euro each time. "Wait a minute,All the tax goes to the UK exchequer, so how is of any benefit?" Said I. He said that people just look at the bottom line and that's it.

So what has all this to do with driving a taxi?
Well if you are afraid of loosing your job and you are finding it hard to pay your rent the last thing that you will do is hop into a taxi to celebrate and to go home again.
A 6 pack and a bottle of wine in the supermarket or a visit to the cinema is as far as the entertainment might go.

Many people who lost their jobs bought taxi plates as well which makes things much worse.

Now the 9 year rule is coming in things will get really tough, if the courts can't stop it.

A Lexus or a good Marc is good for 20 years if looked after.
If it passes the NCT and is road worthy that should be enough.
Anyhow no one is lending money to taxi drivers to buy new cars at present.

No really, there is a new reality amongst the Irish people.

Here are 3 things that you can do free.
Go to see the Turner water colours in the National gallery Merrion Square.
There is a traditional music festival ob in Temple bar.
And then you could always stay at home and...So you're single? Ah! go out so.
Posted by John at 1:33 AM