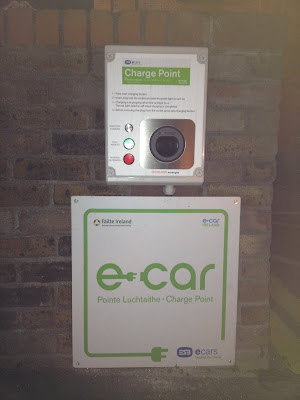 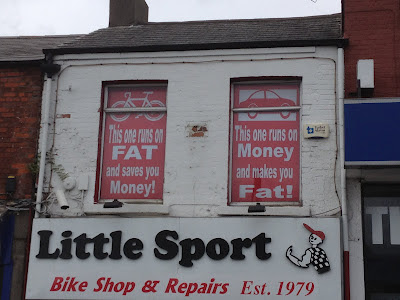 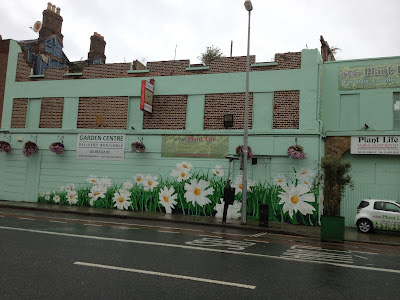 On Cork St. The floral display place are opening a gardening center 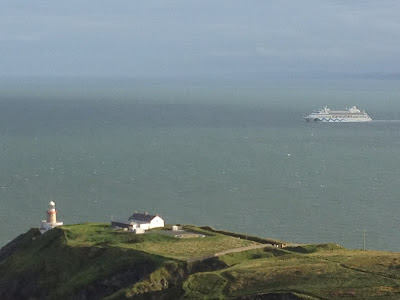 
This posting should have kicked off with a photo of a young couple from the Turks and Cocos Islands. The girl took the photo on the Ifone, without flash at night.
The street lighting makes them look like they have been sprayed orange.
But I didn't use it because for some reason it didn't load on to the computer properly.
Later perhaps


Loads of action at the weekend with the tall ships.

It was really a very thoughtless thing taking the statue of admiral Brown (Irish founder of the Argentine navy) and moving him to the Lord Nelson,then covering the inscription to imply that it was Nelsons statue.

The Argentine sailors laid a wreath at the statue to thank that Irishman for the work he did.
But it was a really stupid move on behalf of the festival organizers.

Here is a strange one.

I brought a guy to the Phoenix park, as he got the HailO system goes "Ching Ching" a job on Chesterfield Ave. Now I did know that that is the name of the road that runs through the park. So I tipped the address and saw that he was standing down at the entrance, then he rang me and we exchanged mutual greetings from a distance.
Him waving me,I flashing my headlights.
Person on board to Lime St. He was French and full of the joys of the HailO system.
I dropped him off.
On Monday I picked up a lady from South Africa going to Lime St.
She had waved me down and started to tell me how her partner loved the HailO system, "Would he be French by any chance?"
Yes it was her partner.
Then around the corner from her restaurant I stopped to adjust the drivers HailO app.
A lady going to Stoneybatter tapped on the window. A yoga teacher, very fit and supple looking.
When I dropped her off I picked up one of the most annoying people ever, Parkgate St to the Luas on the Green. I said that Harcourt St stop would be closer. But she insisted.
Then she started about how she was going to be late, and hen how I was going the wrong way.
So I slowed away down and took a deep breath.
"You were late when you got in. So if I had not stopped for you you would be even later than you are now." Then she said that she only ever paid €8 for that trip not €10.
So I told her that the receipt would show the time and the distance yravelled and she could have it checked out. But the fare is €10
Then I told her if I saw her again she would be getting the next empty taxi coming behind mine, because if I recognized her I would not stop for her again.

You know, people like her are attracting bad Karma on themselves all the time.
Though when I think about it perhaps I picked up a bit of bad Karma from her myself.
Did she really think after all the bitching she did that anyone would give her a reduced fare?


Then 10 minutes later on Dame street the HailO app sounds and I make a quick detour It is the French guy again! So I told him I had his partner in the car just 25 minutes ago.
Dublin is a small place, but what are the chances of that happening again?.

It often seems to me that time seems to jump in massive leaps.
You blink and time has shifted.
50 years ago Marlyn Monroe died, it seems like yesterday.
Then the first man on the moon Neil Armstrong died last week aged 82.
You can remember what you were doing when you saw the event or heard the news and time seems to have no effect on that section of your memory, its like yesterday.

They say that smell evokes the strongest memory recalls,(The smell of a puppy perhaps).

Neil Armstrong was brought to Dublin for the launch of Microsoft Vista which was done in Croke Park convention center. I found out later when it was over that it was he.
They were as mad as hell that he did not say the famous words
"Vista" "A giant leap for mankind".

Just as well as it turned out.

Talking of time the schools are back and the leaves are turning brown.

Where did the summer go?.

The sands of time are flowing.
The sand is gone from the Dublin castle yard for another year, better luck to see it next year.


I met Joe Daly today, he is a really good magician and a friendly guy.
A magician with a personality.