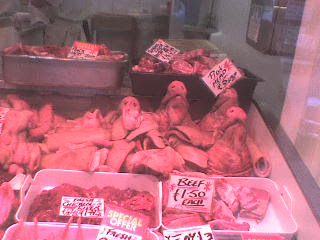 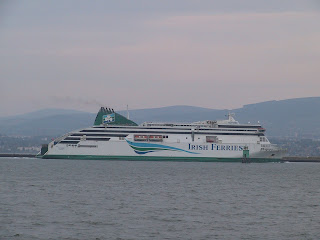 Pigs heads on sale in Moore St.
The Ulyssies heading into Dublin port. When launched she was the biggest passenger ferry afloat. Ferry company shamed for paying worker e1 per hour!

Out at the Airport the other day.
After we left the Kesh (the holding area)and arrived up at the pick up area there was a comedian from America first in line. I was next car, but he ignored me so I called up the people behind him to jump in.

Londoners over for the weekend.
They thought he should have gotten into my car as I was first car.
Well I said , he wanted the Merc behind me and that is what he got.
I would not like to know what he will be charged for his trip into town. Probably 300% (at least)more than it should be.The driver of that car is the biggest robber known to man.
He has a brass neck but he gets away with it all the time.
He was once up in court but he tied them up in knots and walked away twice.

The other day I picked up a couple on the Quays going to the Castleknock golf hotel, it overlooks the strawberry beds and is new.
e18.. I like your prices says the girl. What do you mean ?..
We wos charged e28 to come into town..Could you collect us later?
I gave them the number of a radio cab and told them not to step into any other cab.
The driver will have their name when he arrives.
This is how it works. The cabby rips off the customer and drops a few bob to the Porter.Its a worldwide thing.

I told to tell the manager what happened, after all its a reflection on his hotel.

My friend John Ryan told me of one the other day, guy gets in at the Gresham rank.
"Port please."
Listen to this he said. I got a taxi from here yesterday and the guy heads off for the port, then he veers off course. Stop,stop I shouted at him. This is the way. Says he.
I stopped the car and told him to turn around that I work in the port and this is not the way.
Back on course he headed for the port then straight for the port tunnel.
Where the hell are you going now?
This is the way. No its not the ***way.
He reached the toll plaza at the tunnel. No going back now and drove straight through. then up to the roundabout on the M50 then back through the tunnel again.
I gave out stink and directed him to my workplace.
e46 including tolls says he.
Listen mate the fare from O'Connell St to here is e10.
Learn the route and Stop means Stop.
If you want any more money bring the police. I have your roof sign and license number on my phone I will be ringing the regulators office anyhow. So I suggest you do bring the police round to arrest me before I phone them.
He was very annoyed, it was an expensive lesson for the cabby.

Fair enough if a guy knows where he is going you take him where he is going you don't go on a wild goose chase.
New York and Sydney are full of drivers who do not speak English and who have no clue where they are going you could spend a lifetime in transit.
All the scamming that is happening here in Dublin at night beggars belief.
It has become so bad that I would not be surprised to hear of a murder soon, very unsavory characters around in the night time, both as passengers and drivers.

4 Bang Cafe 11 Merrion Row 6760898 www.bangrestaurant.com
beside Unicorn which is reckoned to be good as well..

5 L'Ecrivan 109 Lr Baggott St.www.leecrivian.com,6611919
All I can tell you of this place is a blazing row with an Italian opera singer from the Westbury hotel.. going round in circles, says he. Well you have to don't you. So I gave him a euro for himself because he must be very short of money to bother with such things..

6 Roly's Bistro 7 Ballsbridge tce. www.rolysbistro.ie 6682611
Opposite the US embassy frequented by the well to do.
I picked up a really cool guy there who told me his life story in 20 mins.
The food was great. But as we say in France. I paid for the meal with the skin of my arse. (It was expensive)

8 Town Bar& Grill 21 Kildare St www.townbarandgrill.com 6624800
I have brought this guy to work a few times and there are good reports of the food.
Its across the road from the Shelbournes horseshoe bar. another must see.

10 Honest to Goodness. Market arcade Georges St. www.georgesarcade.com/honesttogoodness
More of a snackspot I would have thought.

These were the top ten last year in the Dubliner best 100 restaurants.
Pubs offer a good carvery lunch. Go out before 8.pm and have the early bird menu.

I will also add a few which are not expensive, which I use and know to be good.