OK back back STOP 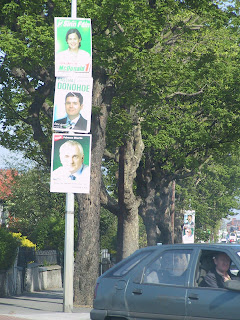 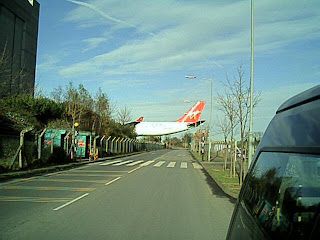 Woa your back far enough.
A plane turns around at the back of the airport.

Well the elections will be over tomorrow.
Then all the poles will be naked with all the posters gone.
All the children will be happy, the hospitals will be clean and plague free.
And there will be comely maidens dancing at the crossroads.
Well that is the theory.

But in fact things will go from bad to worse whoever gets in.
Then they will head off for summer recess.

Took a taxi home last night, one of the new Irish.
No yellow stickers on the windscreen, ID flat on the dash.
No idea where the ares where I lived was never mind the street.
Then when I got out he took out a map to find his way back into the city center.
Funny how these people can come here and be driving taxis when it is impossible for the Garda to have done any background check on them.

Met a guy who had his foot amputated, he had failed the PSV test and him a Dub.
Took him 3 years waiting to be given a chance to sit the test.
Then the driver last night dosen't know where Raheny is.
Something is badly wrong.
Nice enough guy with a complicated life which I won't go into here.
Hope he gets sorted before long.
I can remember being between jobs myself,time drags by and a feeling of being rejected sets in as time passes.I wish him well when he re sits the test

I thought if you came from a hot country there would be no problem going back there for a holiday.
Well not so. I met a guy from Pakistan who had to give up his holiday and come back to Ireland because the heat (45/c) was too much.
His body lost essential salts.
Also the food no longer agreed with his stomach.
So he was back in Ireland.
We had a good talk about the farce which is the department if immigration, the red tape that keeps people waiting all day,Queues start to form at 5am. Then when you get your passport stamped you have to pay e200.
Its not like we don't need these doctors, engineers, hotel managers or shop assistants. There has to be a more humane way of dealing with them.
The money that they have to spend on the visa would feed their families for a few weeks back home not to mention the day wasted coming up to Dublin and standing in line for a day.
It makes me angry when I see the ads for racial equality and civil servants treating the immigrants like dirt.
Australia needed nurses. Philippino nurses were offered 3 year working visas. Working visas for their spouses.Subsadised accomidation, free education and health care.
They were good nurses too.
But they do not come here so much now.

Now the nurses coming here are from India."God its so cold here"

Things are changing here not always for the better,the attitude of people in shops have become strange. Let me give you an example.
I was getting a new pair of glasses so I went to the same optician that my wife uses.
He did the eye test, "Now I will need a deposit" All I had was e20. "I hardly think 20 is enough" So this guy who knows where I live forces me back to the house for my credit card.
"Take the full amount" I said I said when I came back, "After all if you disappear I can claim a refund from the credit card company"
The seriousness of my comment was lost on him,he was giving me no respect as a person or as a customer.

Simple fact I have 3 sons all have had new glasses in the last 2 years,all from Spec Savers. I won't be going back either.

A bit like the guy who rings the dealership.
"Could I speak to someone in sales please?"
They are all busy could I get someone to call you back?
Sure My number is *****
2 days later he gets a call back.
Its OK, I put in my order for the 10 trucks I needed yesterday.
Posted by John at 4:32 PM