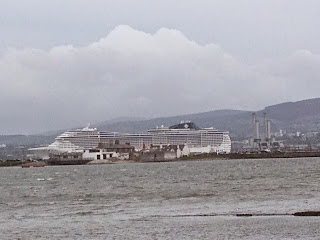 A huge cruise liner leaves Dublin port, 50 other liners are expected to come this Summer with thousands of people aboard each one. 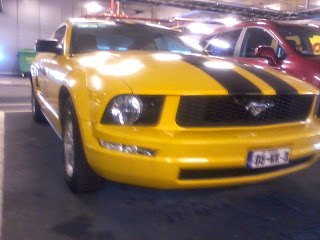 I don't know how this photo got in but it is a Mustang for sure. 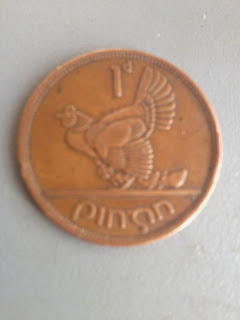 Once upon a time my friends this was real money..


Well I will give you a quotation.

"Our lives begin to end the day we become silent about the things that matter"
Martin Luther King.

We are spending loads of money on a referendum equal status for same sex marriage and the minimum age for our president to be lowered.
How someone of 19 would have the experience for the job of president is beyond me.

Anyhoo it is costing millions at a time when hospitals are being sued for bad practice resulting in many deaths and no one is sacked.
Staff in a nursing home were filmed by an undercover TV team beating poor blind and handicapped patients. (Summonses have been issued)
A baby was found abandoned in a plastic bag on a remote lane way at deaths door this week.
Hundreds of families are facing eviction because they cannot afford to pay for their homes bought in the boom years.
A 14 year old girl has given birth to a baby for the second time in a year.
Junkies ans beggars line the streets of our capital city
Someone somewhere has to start to work out what is really important and start dealing with things.

Someone needs to speak up

As my present birthday comes up I have to say that growing older is compulsory growing up is your choice.

I am younger than Bruce!

So I guess I was born to run as well.

"Dad you went to work at 6am. and you are only home for breakfast now,then you will be off again at 4Pm and you won't be back until late,you never take a day off.
You are working too hard"

So I said that if he washed up the dishes and put the clothes wash out on the line it would be a big help to me..

They were still lying there when I came home.

I have to get my meter sealed after they have verified that the settings are correct..€68 on top of the €60 odd fee for changing the setting, its all a racket.

Still you have to keep on going.

Work wise things are magic, I got 4 return jobs while dropping off people, that is very very rare and back to back it is mad altogether.
One guy was a Cancer research guy from Oxford university, his expertise was controlling the blood flow to the tumors, by starving them they could kill them.
I told him about a radio programe on the BBC radio 4 about P53 a gene which destroys abnormal cells but is absent in cancer cells.
Cancer is not just one thing, it takes on many forms, a cure is 20 years away he told me.
Perhaps if real funding came in, like the cash pumped into wars.
Then we would have Cancer beaten in 5 years.
A good bloke €12 tip.
Posted by John at 2:42 AM