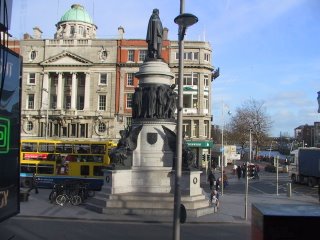 This is a photo of Daniel O'Connell, known as the liberator. He was a member of parlament duting the years of the great potato fammine.A barrister by profession. He fought for rights of the peasant farmers and held huge rallies around the country. His speeches are often used by other people to lift the masses.
The base of the statue has 4 angels. Very stern ones at that. If you are passing it take a look at the one on the right on the other side. She has a bullet hole in her left breast. She was shot in 1916 by the British (no Irishman would shoot an angel) 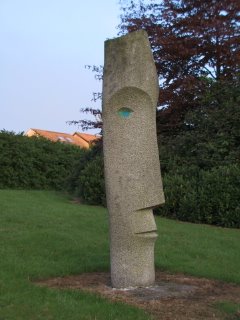 The other one is on the Glenageary Rd Upr.
Makes me think of Easter Island.

Yesterday I saw a taxi on a low loader, with a plastic sack stuck to the pillar at the side of the windscreen.
There was only one likely cause for this damage.
A pedestrian.
I am not saying it was the same car, but a taxi hit an air hostess as he headed into the Kesh (Holding area) There is a hole in the hedge and the staff run through it all the time. It is an accident waiting to happen.
There was a 3 car pile up at the entrance caused by the boy racers rushing to get in first.

Remember a simple error could cost a life not to mention what your insurance will go up by.
Got my meter sealed today..In Italy it costs one euro to have your meter checked over here it costs something like e70. Still it would be a long way to go just to save 69 euro.


Slow down and take care
Posted by John at 9:40 AM