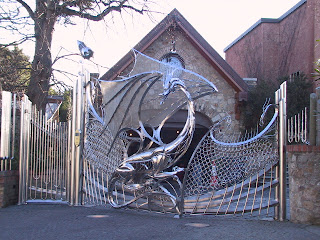 I should have saved this photo to share with on St Davids day. But I was so impressed with them that it could not wait. The gates are to Harlech house which is a gallery ,studio and house. They are made of stainless steel.
if you click on the photo you can enlarge it.

Do you remember the rant I had at the Garda last week? Well an example of what I was giving out about came to light yesterday. The police in Austria broke up a child pornography ring and informed them on the 22 August that 2 computers in Ireland had been linked to the case.
They denied that any such information had been received. Only to later state that the information had been received but was put on file and not acted on.
Well the trail will be nice and cold now.
They are very fast with the speed camers on the roads around the airport where the limits are lower than they should be, easy money. Not like something you have to put a bit of effort into.

Anyhow I must tell you of a dental nurse from Co.Wicklow going to Mater private consulting rooms.
Stay away from them fellas I said.
Then she gave me her story.
She has an aneurysm in her brain which was causing some slight deafness, it had been picked up by an ENT doctor and confirmed by a scan. She took the scan to the Blackrock clinic. The doctor put the xray on the projector and started to say... What have we hear ? What are we looking at?
She got a bit peeved at this and walked over to the screen..Well Doctor you won't understand much because its upside down and back to front!.That R means its my right so it has to be on your left!.
Well you seem to have some medical training, what are we looking at?

I just took the x ray down. I am sorry you waisted my time. If you dare to send me a bill I will sue you.
He didn't bill her.
The operation to correct it is riskey, she could be in a wheelchair, she is getting another opinion, but she has decided to leave it and live a fuller life instead,I wish her the very best of luck, say a prayer to your God for her.
It is good to live every day fully,like it might be your last.

I picked up a Frenchman at the Westbury the other day. He is a historian of Irish history and has just published a 700 page book on our history. He knew his stuff allright its a thing when you live in a country you don't know your own history. Thke a look at the exabition which is on in Collins barricks, the Frenchman had given some artifacts for the displays.

Tomorrow France play Ireland in Croke Park which is the home of the GAA. First time rugby has been played there. Landsdowne Rd stadeium is being knocked down so the rules not allowing foreign games into Croke Park has been kicked into touch.
Better get to work.I will add a PS later if I can.
Posted by John at 2:08 AM