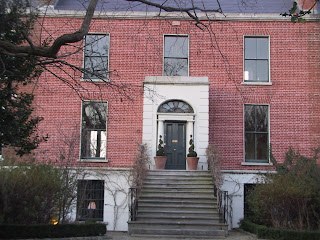 Here is a beautiful house in Wellington Place Donnybrook. It has nothing whatever to do with the subject matter, which follows.

The oldest profession in the world, or so they say.
Before Christmas I was in Sandymount when I was flagged down by a cloured girl (from Brazil) who was looking for St. Johns Rd..The road is not on the Dublin map..According to the map it is known as St. Johns Rd East. But not so.
Anyhow I digress, when we arrived she told me that she was so excited that she was going for a modeling shoot. I was taken aback because this is not the way modeling begins.
It starts with a scout, an agency a stylist, a photographic studio and then to a portfolio.
This it seems to me, is how innocent girls are introduced into a life of prostitution.
The introductions the grooming the partys and the drugs.

Look here's my phone number ring to tell me how you got on, she never rang.

She was on my mind still for a few days so I rang Irishtown garda...No No we don't deal with anything like that. Ring immigration.. I was not ratting on her but I rang immigration. No Reply, the phone rang away until it rang off.
So I rang Garda headquarters Pheonix park and , Harcourt St..No reply
Crimestoppers.. no answer, Garda confedential line no awnser.
I rang Store St garda station as I thought I remembered something..No there is no department dealing with prostitution here.
I rang the rape chrisis centre..Yes they thought that the charity which helps prostitutes might know.
Later on that day a lady rang me from Ruhama and told me the guy I should speak to was Insp. Pat Lordin. Who was head of operation Quest which was dealing with trafficking and prostitution they are located in Store St garda station,they target the organisers not the girls..
After dinner I rang up and gave the details of my suspicions. The guy who spoke to me was eating and talking to someone else across the room at the same time, I really felt like hanging up. He took all the details and rang me back later to tell me there was no St. Johns Rd in Sandymount!. I had told him that on the map its called***east at the beginning of our conversation. Later he told me that there was no house with that number on the street. I told him it has a big black wooden gate and the number is plain to see.

I heard nothing since.
Its hard to believe that all the numbers rang our no reply. Switchboards to offices where hundreds work, no operators to awnser the phones.
Imagine being a forigner without access to help language and money. It is frightening how loose the law enforcement is.
Girls are sold between brothel owners and few people seem to care.

I would like that if someone rings up the police you are given a log number, so that if later 7 bodies turn up someone could ring the press give the reference number to the time and date that they first noticed something was going on. The police in Belgium had been called to the house of Defreau (mass child killer) sevral times. They knocked on the door got no reply and went away again. But they had no records kept of how many times they had been there until the bodies were finally uncovered.

She was a nice enough girl If she was my daughter or yours I would like to think that someone would look out for her.. But if the police couldn't even find the road in 2 weeks what hope do we have.

There are levels and types of people involved as you go down through the sorry mess.
The key to modern prostitution is drugs, nearly all the girls who work are addicts.
When the Shah fled Iran the eleite were forced to turn their assets in to a highly portaple form, they chose gold bars and heroin.

Heroin has become the driving force behind crime since.
Posted by John at 10:58 AM