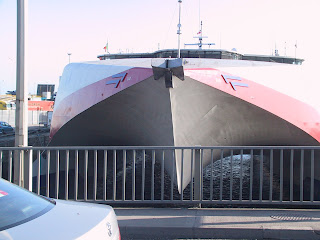 A high speed ferry belonging to Stenna line with a Welsh dragon on the side. It has been parked down at the Point depot for a few weeks.
These boats are not cheap and need to be working 24/7 to pay the bills. 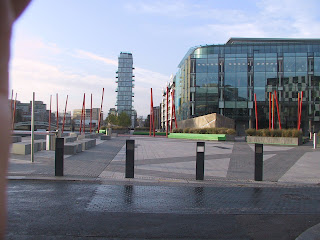 A new skyline down near Sir John Rogersons quay

Remember the conference center on which the work had stopped?

The latest news I hear is that it was built without planning permission being granted,so they can't insure it so the work has stopped.

Wow....perhaps they will blame the new Polish guy,who will be innocent.

This week I took the bull by the horns and tackled a job which I had been putting off, after the income tax I felt that it was important to have the seats covered in best leatherette.
Christmas is coming and the people with full bladders will be getting into the car. No nasty surprises this year, just a quick wipe and a dash of Dettol and on I will go working.

I was told of a guy in Drogheda who does a good job,so on Tuesday I drove over and got it done.

They did a really good job and a lot cheaper than in Dublin.

He takes the seats out of the car and makes the covers to measure really tight,I am told that they will not stretch and get loose,time will tell.
I had to wait around for most of the day for them to do their magic but I was close to the dole office and it is the busiest place in town.
It is hard to say if it the recession or if too many shopping centers have opened up in the town but a lot of shops in the town are closed up and even in the Laurence shopping center there was lots of vacant units. To add pain to the situation they are building a new shopping center around 2 miles out the Dublin road.
This is to be open for Christmas.
I pity anyone trying to make a living there.

One of the guys who made the covers told me a tale of how peoples attitudes changed for the worse during the Celtic Tiger boom years.
He bought a new suite of furniture from a guy he knew and trusted in Navan.
But after a few months it collapsed, so he took a look at the frame and found it to be of a very inferior quality.
His pal did not want to hear about a refund and dismissed him.
So he brought the suite of furniture back, when he demanded a refund he was refused.
So he decided to take the shop to court,the shopkeeper just said.

"You don't have enough money to sue me,don't waste your time"

It took 3 years the guy said but I got my money back...With costs...the publicity helped put his furniture shop out of business too.
Just goes to show you how you can't be too arrogant.

More people who rode in the taxi who have been given their notice to quit.
Jobs gone.
A girl this morning came home from London in January, she works in advertising she told me that the revenue just dried up. She has 4 weeks notice to work before she goes. Flying to London on Monday to do interviews, good luck.

Lets hope she doesn't decide to start driving a taxi!

Dell in Limerick are laying off workers and another place is laying off 400.

Well that's nearly all from the lazy acre, where all customers are happy and well behaved, In a place where you only have to point to the sky and 20 taxis stop.
Where at 2.AM taxis wait in line to bring home the happy party people..

Well from midnight fares have gone up 8%
And the cost of getting sick in the car has gone up as well.

Have a nice Halloween

Here is the link to the drivers survival handbookNow the book is full of "padding" but I suppose if it gets you off one speeding ticket it would be well worth it.
Posted by John at 10:06 AM