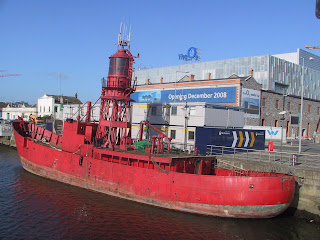 The Point opening soon. Now called the O2 venue.
The lightship Kitywake lies in the foreground. 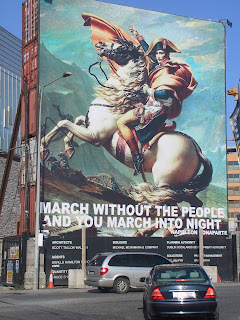 We had a budget and the people protested, they tried to tax the sick and force cut backs in education, the protesters are marching on the Bastille.

Well here we are today!
Winter just around the corner,the clocks turned back (daylight saving)
and the Dublin city marathon over for another year.
The first lady across the line was on her first ever marathon, well done to one and all who took part, no use taking photos we have to work.
It was a funny weekend with regard to work,there was very few people around and loads of taxis.
I went home on Saturday and Sunday night night, made up some ground today Monday, loads of people coming back to the city after the weekend away. The Cork Jazz festival was the second big thing after the marathon here in Dublin.
The old Garda were out with road blocks taking breath samples at random, can't even begin to understand why they would pull a working taxi in and test them, do they think for a second that a working driver would drink? While they are testing him chances are that another driver is slipping through the net.

I learned one thing from a well pissed nurse though, my mate Alan was held up by a guy with a syringe a few weeks ago, it worked out OK in the end.
She told me that you have nothing to fear from a blood filled syringe, we get needle stabs all the time, you just go to a doctor straight away and get an anti viral injection and you will be fine, I spoke to a second nurse and she told me that it is a series of injections, but you will have little to fear,she had just run the marathon in 4 hours 55 mins. and was going out to celebrate,I hope she is off tomorrow as she was wiped out with tiredness even though she was going out now.

Now to the second thing I learned.
A lady form Brighton over here needed to hire a car, she had lost her licence for speeding but she has had it back for over 2 years.
Hertz would not give her a car, so she asked me to take her to the airport to get one. I found Budget in Drumcondra open, they had a car for her, no problem. I guess she will hold a grudge against Hertz forever. I mean its not like she killed someone, you could loose your licence in a 20 mile trip the way these speed cameras are everywhere.
I tried to tell her about a book I bought last month "the drivers survival handbook" by Marin Thwaite. (streetwise publications)Can't find the web page.Google it, but the book reckons that 95% of the tickets issued can be fought and beaten there and then and a lot of the others will not stand up in court. If you know how to deal with them.found it on Amazon but I got mine new a lot cheaper.
I will find the website next time I post.

She had drifted off to other thoughts by then so she did not hear me. (Taxi drivers know nothing)
Late one night 2 Liverpool lads stopped me in Pearse st."Turn around lad were going to the Holiday inn" I explained that it was a one way street.
Then they decided that they would do a deal with me, to get me to bring them there for e5. well flag fall is e4.10 plus e1 for second passenger, so I just said enjoy the walk, how many pints did you get with a few bob off the price, thing was that the fare would have been only around e5.30 but bad attitude gets you nowhere.

Another happy couple off to the airport from Heuston station. "Going anywhere nice?" Cuba came the answer and I had no Buena Vista Social Club to play for them.

Off on their honeymoon, the fare came to just over e25 .but they gave me e30 a full e5 tip. Think of them sunning themselves in a 5 star hotel as you read this and send them best wishes..


I never heard that mix before it's good..No?
The thing I love about the BVSC is that they were all washed up on the scrap heap and were recycled as it were, golden oldies!The pianist Reubin Gonzalez died a while ago, I wish I could play the piano 1/2 as well as him....
Ah well.

Oh the old American cars of the 60s and the fine buildings, lets all go before Fidel Castro dies.I have the video, great to look at on a very wet day here in Dublin.


You if you don't have some of their music its great for coming back to town after a long run.. Punters usually don't appreciate it.Have a look on you tube for more.

Just to finish, one hero of Cuba is Che Guevara that iconic portrait was painted by an Irishman in Kilkee Co.Clare. Che was on a stopover in Shannon on his way to Moscow and someone brought him for a bit of a spin around, the student recognized him and drew his portrait.
That portrait was copied by many people and appeared in loads of places, but the artist never got a penny for his work, a pity that.
Posted by John at 5:05 PM