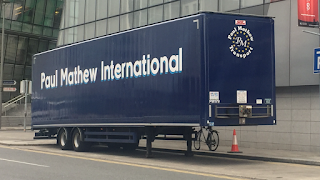 A few months ago the porter from the Marker hotel called me over.
A stout gent jumped in and introduced himself and we started to chat.
He had been given an award as the top car salesman in Britain,plus best after sales service and as the conversation went on he told me he had 200 garages. There was a very intense conversation about how this could be managed.

"All my staff are motivated and trained again every few months, my staff talk to each other and each one knows what is expected of them"

He popped up again in the paper today, he had died last month.

He had a great laugh when I told him how the Irish car salespeople treat prospective clients.
"Not in my world son, no way"

The were going to Brown Thomas and we talked between ourselves while his 2 sons and daughter in law chatted in the back. The meter read €10.10 when we arrived and while he was getting out I pointed his family towards Louis Copelands shop.
"Before you go into Brown Thomas take a look in there. all good quality clothes at a better price, with no snobbery" I said.
They turned to go and Arnold came over with 2 €10 notes.
€10 is enough I said
"and a €10 tip"
We shook hands and said thank you and off we went in different directions.
No bullshit with him he was worth more than a £Billion

I told an American about him once and he told me .
In the States we have a saying,
"First you buy the man, then you buy the car"
You have to believe in the person you are dealing with.

You would really like to deal with him for sure.

So on Friday a 16 bus swung out of Ballymun Ave past a bus stop leaving 3 people standing there.
I pulled over and asked the one who had his hand out to jump in and I would put him on that bus.
At the next stop he was slow jumping out so I raced him to the next stop pulling in in front of the bus blocking it and my passenger got out and on to the bus,as the bus moved alongside me I got dogs abuse from the driver.
"I have a camera and you will hear from the Garda bud"
"So have I bud"
There are assholes all over the world.
On my own road around 7 years ago the bus driver slammed the doors shut as an ex bus driver was getting on.
The poor mans leg was inside the bus as it drove off in spite of his other passengers shouting he didn't stop until he reached the next stop.
The guy died as a result of his injuries.

So boys and girls drive away slowly, coats and scarves get caught in doors.