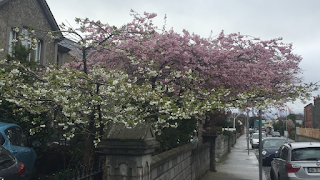 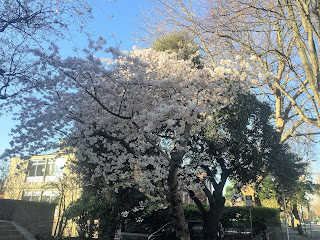 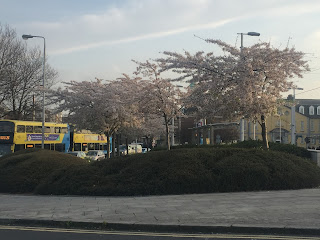 Spring has sprung and the trees are in bloom.

Time flies and its hard to believe that I haven't updated since St.Patricks day.
I thought it strange how many of our teenage American visitors were getting hammered at around noon. Their parents must never had told them of the dangers of over indulgence.

But enough of the past.We had a lightning bus strike yesterday.
Loads of people stuck at bus stops, lots of work to do.
If only we could pick up 4 people at a time and charge each one €5 into town things would be great.
Foreign students were the worst hit. They would not be listening to the Irish news so they couldn't understand why there was no bus. A girl from Brazil waved me down. She had an exam in her language  school. She is a teacher back home and wanted to get a cert for English to help her career.
She went through an agency as an au pair but her host family won't pay her and they will not give her definite hours.
So its a bad rap for her.
I hope she contacts her agency and perhaps they might have the moral backbone to get her the money she is due. She was a great kid, full of life and the joys of Spring.
I was up around Kilmanham when I was flagged down and the lady invited the others at the stop to join her. One lady did join her and we went over to Abbey St. The second lady apologized to the first that she had no money, only the bus card.
As the first lady payed me she leaned over.
"Going into town with NO money, not even the price of a cup of tea.
I will have to offer it up in a prayer..
Then she said something I haven't herd in a long time
Some people would live in your ear !"

Through modern science and the internet I bought 2 Toyota Prius cars in Japan around Christmas time.
One is in my drive and the other arrives today.
Getting the cars registered and all the taxes paid is tricky.
One car was nearly sold and the buyer had to think about it, as luck would have it. He walked away and then I found that the registration tax had to be paid (VRT) It was around €900!
By the time he came back I told him that his time was well up, I would have taken the hit for the VRT if it was deal done, as it was I was off the hook.

Every year since this thing happened I think of this English couple.
I had stopped at the Conrad Hilton hotel on Earlsfort terrace. A lady passing by asked me for directions to Baggott St. Then the concierge at the hotel started blowing his whistle.
I moved over and he threw the suitcase into the boot and as soon as the door slammed the lady shouted Airport ! No please or thank you.
I remarked to them that they were making a movie on Fitzwilliam Sq. 1920s buses and taxis.
As we drove into the square she leaned over again.
"Driver do you think we are stupid, stop driving us around in circles! We want to get to the fucking airport not a fecking sight seeing tour."
The proper way to deal with this is to take them as far off the main road as you can and tell Them to fuck off ! But I felt it in my bones that this might be an interesting journey, and it was.
They were arguing with each other, something had not worked out, a con of some sort.
It sounded like a cement mixer filled with gravel. They growled at each other.

As we reached the airport I picked up their change to have it ready and went to the boot.

As I lifted out the suitcase and straightened the handle. I said.
"I hope you left enough time for your flight"
"Course I have you fecking moron" he replied

"You see the change in the hour really fucked me up today"
"Wat's you talking about you stupid cunt?"

The clocks went forward an hour last night, Its Summer time now.
It took a good 7 seconds for reality to sink in.
They had missed their flight.

Later a word came into my head
Karma