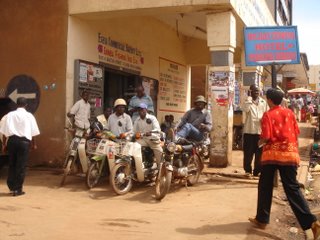 Here is a Taxi rank in Uganda. You could go by car but one of these jockeys will take you there in half the time for only a few shillings! Perhaps it will be the way to go in all cities soon.

Yes took the day off and brought my youngest to see James Bond.
Perhaps I am getting older But the buildings and settings impressed me far more than the women. The way it was going the femme fatal would have had to have had bigger breasts than Anna Nicole Smith and the love scenes were going to become pornographic. Special effects were great,they have come a long way.
The opening sequence brought back the old Bond formula and it was action all the way. This Bond charicter was credable which is something, but Sean Connery was a hard act to follow.

Our regestration system puts the year first. Loads of 07 cars on the road.

Now back to the real world.
So the window stickers are gone! They created blind spots and were burning out the motors in the eletric windows.
The new fare cards which have been issued to replace them list out what is expected from passengers and what passengers should expect in return.
One example is a clean vehicle and a quiet journey.
Reminds me of the tale about the bloke who didn't want to talk. All the way through the journey he held up his newspaper to avoid the taxi drivers eyes. The driver tried evrything to engage him, the football, the weather, the traffic,them foreign birds,nothing got a response.
After he dropped the passsinger off the taxi moved up a few yards, stopped and reversed back. The passinger thinking he had left something in the car came up to the window only to hear the taxi driver say. "Did you ever think of buying a hearing aid, ya bollox" Such is the Dublin taxi drivers way, he will allways get the last word.

Getting back to the chaos at Heathrow over the holidays.

They had 2 major belt failures in the baggage sorting areas. People were sent off but no bags! Now they are transporting thousands of bags by road to a company in Italy to sort them out. It would seem to me that there are enough people in the UK to organise this sort of operation(Think of all the out of work santas) without the added complication of doing it in Italy.I suppose they can now say truthfully "we cannot find your luggage"

Still what do we know?

Best christmas card came from the USA. It shows the late Pope John Paul lying in state in his red robes. In the background you see the world leaders. George Bush,Bill Clinton etc. George Bush is saying. "What happned to Santa?"The card co. is.
www.NobleWorksInc.com But the card is not featured on the site.

I spoke to a beautiful lady the other day who was back from 2 weeks in the Carribean. Some people just know how to live in style,its winter there and windy. I could live with that. If my Euromillions lotto comes up tonight thats where my next broadcast will be coming from.

Still people are much the same the world over, we all want good health, to live in piece and safety and enough to pay our bills.
I know we have the bad people too, drugs and disease are global issues.

This new year I hope will bring new solutions.

Rich and poor but brother don't be sick and poor in the USA.

Your health is your wealth. Live your life don't endure it !
Posted by John at 11:29 AM