A man walked into 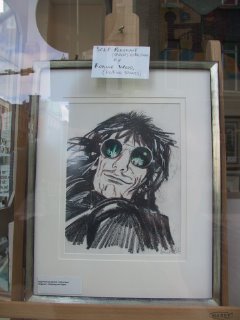 Some people are good at one thing, then people think they are good at everything. Its a self portrait, I think its a quite good likeness. Many artists and writers live here as the government allows them tax exemption. Rod Stewart arrived in Clane to look up his old mate and they found themselves in a local pub. The owner happned to be passing through the lounge and he collered the barman. "Any sign of trouble from them Brits throw them out double quick. Whatever happens I want no singing" Off he went, little did he know who they were and if Rod Stewart and Ronnie Woods of the Rolling Stones were known to be doing a live gig in the pub he would have packed the place.

There is a bit of a revolution taking place with regard to the trade unions and Dublin Airport. Moves are afoot to appoint a comittie to negotiate on behalf of the drivers and the DAA.
Many of the lads feel that the unions have been leading the workers up the garden path. Insurance prices have tumbled since Quinn direct entered the market, many feel that perhaps the union should have made AXA be a bit more compedative, who knows? With the regulator in place the unions don't seem to have power any more.

Things are slow, the other day I was going through Sandymount and I caught sight of a child behind a car which was reversing. I stopped and shouted at a lady who was on the footpath. Theres a child behind that car, Lookout! She went behind the car and then returned to me. "Its a little dwarf, she lives around the corner" Well I know I felt a bit foolish better a bit foolish than have a dead kid on your mind.

If I was single I would be in Las Vegas

A man walks into an antique dealers shop..A violin in one hand and a painting in the other.
The dealer looks at them for a while and says A Stadavarous and a Goya together !

But he says smashing them up.

Stradavarous was a lousy painter and goya made lousy violns