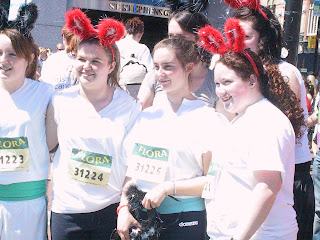 Bunnies ready for the mini marathon 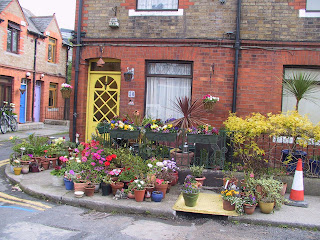 
What a weekend of sunshine and events.
Celene Dion on Friday, the Blooms garden event in the Pheonix park, The cat laughs comedy festival in Kilkenny and Boyzone in Croke park, then the womens mini marathon on Monday.
Plus the docklands festival which ran all weekend.

The girls who ran in the mini marathon were mostly sponsoring different charities so other people did really well out of the event.

The work was good but you still had to be lucky to be where the work was.

At a big event you do get extra work ,but you spend ages stuck in bumper to bumper traffic and because the volume of traffic is such there is no short cuts.

I often feel that the day my ship comes in I will be at the airport.

A lady got in the other day and when she gave me her destination I said, "easy to guess where you are from"
"Where is it then?"
"Wales" said I.
"Most people guess Welsh or South African, but I am from Trinidad"
Well I could hear it then in her accent, when you think of someone from there you expect to see a black face.
She told me that the pace of life there is so good, really laid back.

It sounds like the place to live alright, really laid back.
Guess I will keep it on the list of must see places when I win the Lotto.
She is a doctor here in Dublin and she told me that she had never seen coke until she came to Ireland, yes we have loads of hash but that is in our culture, these other drugs are not."We don't really have the money either"

A lot of people under pressure at present, you should have seen the line at the welfare office on Pearse St at 2.pm..Times are getting tougher.

Honestly I pity the guys who tell me how they are buying a taxi and they are going to make e500 every day,just like me!
When they have put in one week they will know the error their ways and get a big reality shock.
One of the guys on the rank told me how he had a back operation a while ago and spent 3 months on the flat of his back. Welfare gave him nothing!

That was at Heuston station where a lady tried to get a handicapped person from her car to her wheelchair. The chair was parked too far away and the lady fell down between the car and the footpath. I got the other driver to move the chair back and hold it steady while I got my arms under hers and lifted her right up and over to the chair.Guess we both got a good cuddle!
You have to think things out when you have wheelchairs, many of the taxi drivers in the UK were never trained in the correct methods in loading and handling wheelchairs, the result was that many of them sued the government for back injuries.

You could try that lads if any of you have a wheelchair taxi..I never was told that I needed training.
One day I was unloading a big guy and as I stepped back and took the strain I backed into the curb and the chair almost came back on top of me.

You would need a heart of stone not to be affected by the sad cases you see in wheelchairs. Children and young people with terreble crippleing illnesses.

I often said a silent prayer to myself after I brought them home.

Thought my luck was in on Saturday night, girl got in from Bulgaria asked me if I wouldn't mind bringing her to Celbridge.
She was just telling me about her job as translator, how she had witnessed things that she thought only happened in books.
She would often have to ask them to repeat themselves again as I would not be sure I herd what they said correctly.....Then her phone rang...."Yes I am in a taxi...no not very far....Are you sure?...Driver back to where you got me, he wants to talk after all"
Thats life, e6.50 instead of e35..

Would have liked to hear about Bulgaria, she was a good talker.Perhaps another time.

Now after working all weekend I am off on Wednesday.

The workers in Las Vegas take that day off too.
Posted by John at 11:05 AM