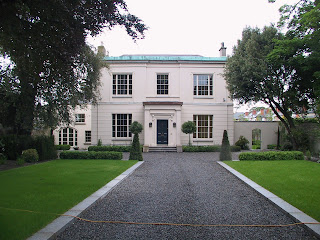 A house on Oakley Rd,
A neighbour told me they would accept e5 million...Down from e12 million 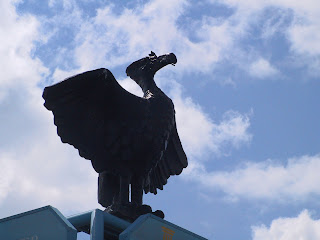 A little bit of Liverpool. A Liver Bird

Well here I am at posting 200.
Can't say things have become better in the taxi industry since I started the blog.

But it got a load off my mind by sharing it with the 2 other people who read it.

Saturdays lotto was e18 mill or so and I picked up this shakey couple from Donegal who were going to RTE, they were, as it turned lottery winners themselves, they were doing a show about big winners.
I wished them the very best of luck,
I think anyone who declares they have won the Lottery is a fool.
Perhaps tell your mates you have won e5 grand and leave it at that.
People get very jealous,they would even kidnap your kids.
There was another great piece om the radio from a Lottery winner in Sheffield. How they had won the Lottery and after buying better houses they gave away most of it.
They built a cancer unit for teenagers on to the local hospital. Money for Meningitis trust, made a large donation for a scanner at the local hospital etc. etc.
This has encouraged others to donate.
We are just plain folk, but it has been great to do so much good with the money.

John Steinback wrote a great story called the Pearl, goes into greed and desire in a great way, told as only he can tell it.
Bring it for the hols..

I have spoken about how people who organize events should be taken to task.

Neil Young was in concert in Malahide castle on Sunday.

First Dart train from Malahide stopped in Connolly station and kicked everyone out at 11.20pm.
Most taxis had quit as Sunday is early closing for the pubs.
Anyhow with Dublin playing and the Euro finals a lot of taxi drivers had taken the day off.
Thousands decended on to the streets and we all got fares for the next 2 hours,
the later trains stopped at the stations along the way, but for many it became an expensive night out.

I have raved about it and now I will take the advice of the mad DC cabbie.
(On second thoughts it could have come from another great blog "Cabs are for kissing")

When they say they are in a hurry to get to the airport,opera etc I drive at the normal law abiding speed, I stop at amber lights.I totally abide by the law even if they say I will make it worth your while.

If on the other hand they say something like here is $50 its yours if you get me to the airport before xx time.

Then I will put the pedal to the metal. But only then.

All the other things mean nothing, its cash on the dash.
Money talks, bullshit walks.

I picked up a manager from the Westbury hotel (5 star) He had to go to Stillorgan then on to the airport.

He had forgotten his tickets and was pressed for time.

So I could have picked up a score of speeding tickets getting him there.

He gave me e55 and kept his hand out for 30cent change.

I think I did myself as I only charged e1.50 for the East Link.

Now I ask you...he works in the service industry, he must have worked his way up from the bottom,when he was a porter he would have expected $5 for calling a cab, he should know better.

Still I will be keeping my eye out for him the next time.

Remember I picked up a lady in Cabra a few weeks back?

She was in a hurry too and she objected to the route I was taking, so I said you have 2 choices. Give me directions to go your way.

Or I will take the quickest route.

If I am late by my route you get the ride for free.

If we are on time you pay me double whats on the meter.
She agreed and she shook on it.

We arrived with 10 mins to spare. Here you are you can keep the change.40cent or so.

And out she got.

So the next time you miss your flight etc..


A small boy swallowed a camera, his mother brought him to the doctor.

Well Well said the doctor.
We will just have to wait and see what develops won't we?

The kid says.
Don't be so stupid, see what develops?
its a digital camera.
Posted by John at 6:09 AM