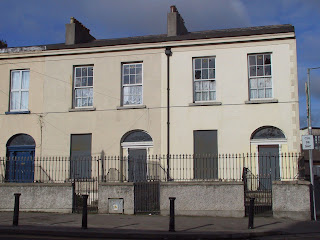 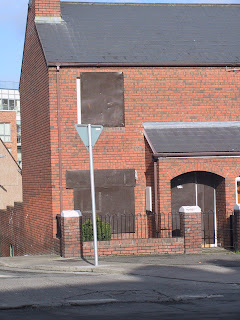 
I had the whole post ready to go, all the spellings done, just to add the photos of Inchicore then I lost everything.I really don't know why it did not autosave.
The fraud squad went into the Anglo Irish Bank today and had a very busy day going through files, The shredders must have been very hot after destroying all the files over the past few months.
As St Patricks day approaches our elected leaders prepare to fly our to Washington, New York, Los Angales and Sydney. Nero fiddles while Rome burns.

I find it a laugh to think of Brian Cowan and co flying off to Japan on a trade mission while our banking system approached meltdown. Japan has its own problems at present so they are not in the way of buying much.
I think the world would respect any leader who said. "Look lads there is a problem which needs fixing, so all trips away are suspended for the moment"
Lets claw back those golden handshakes and pensions given to the senior banking staff, after all where fraud is committed its the sack and no pension then perhaps a stay in prison.I am fed up hearing about white collar fraud which goes un punished.

We still have no word from our esteemed regulator or union leaders so we march on Wednesday again.

I have a video showing the taxis waiting at Heuston on Sunday night I counted 76 cars but there may be more. I will put it on you tube for you later.

An ex Garda Sargent was sent down today for soliciting sex with a five year old child...his second offence, now using Garda logic this would mean that all Garda are paedophiles.
Just as they treat us all as criminals.
Posted by John at 11:18 AM