The French are here. 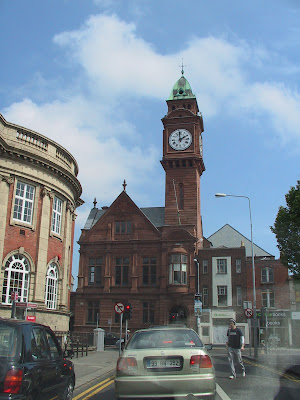 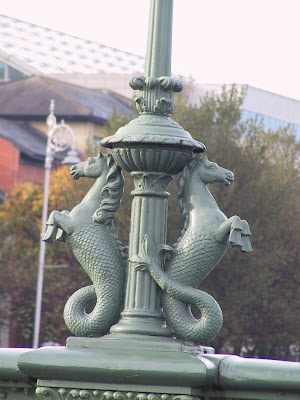 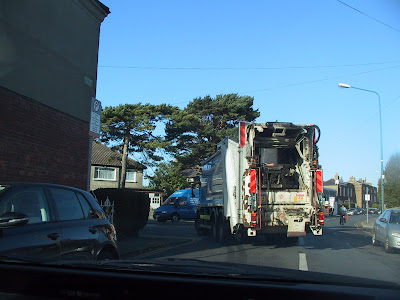 Bin lorry in Sandymount, look they have taken someones bin away! 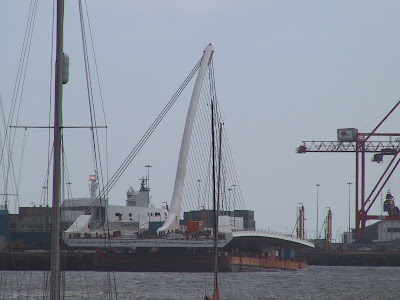 Its hard to believe that the new bridge over the Liffey (Samuel Beckett bridge)was brought over here on a barge from Holland.
Now in place it looks fantastic.
The previous newest bridge (James Joyce) looks awkward in comparison.
First the good news, the Belfast to Dublin line will be open again on Monday, the bridge on the Malahide estuary collapsed and trains have not been running between the 2 cities. This will really ease traffic as the commuters had to use road up until Monday.
Then there is the Internet hostel booking company Web Reservations International which was sold for over €200 million. The founder and co founder are in their mid 40s.So I suppose its off to somewhere warm for a few weeks!
Its great when people can develop software and bring it to a point where they feel that they must sell it so that the product can grow.
They took the money unlike another guy a few years ago who had a method of internet payment that was secure, a great concept, the big fish came over and offered the Dublin company millions, they refused to sell.
Then the dot com bubble burst and in the inter someone else found Pay Pal and the guys in Dublin instead of having something to sell had nothing but debts. They had borrowed loads of money in the hope of making a fortune.

C'est La Vie as they say in Paris.
Talking of windfalls, I had 2 winning tickets in the Lotto in one week.
The grand total was €14, still its a start.
I met a really nasty piece of business today.
Going around the Green and down Dawson St there was a Prius in front of me, he went down the bus lane down to Trinity St. I decided to tell him that it must be his lucky day as the Garda are usually quick to pull in cars on that stretch of bus lane.
He pulled out his Garda warrant card and told me to mind my own business and just drive my taxi. Well I wasn't going to give out to him but, it wasn't official Garda business, in fact by his age I would say he was retired.
I hate these Mini Hitlers who use the badge of officialdom to throw their weight around, There has to be a point where this kind of behavior has to stop.

Sometimes I just wish it could happen, don't you.

Idiot of the week has to go to the parcel postman. My wife heard the doorbell and saw the postman walking out of the garden, she called him back and he said. "I had a parcel for you I couldn't open the patio door so I put it in the bin!"

First prize to you sir.

Remember a few weeks ago someone brushed against my car in the supermarket and drove off? Well the damage was not too bad compared to this one.
In this case the driver was caught later and charged with driving away from the scene of an accident, in Canada the Mountie gets her man.

On the same subject, unfortunate events.
Imagine having a new sports car worth over €1 million, there you are talking on the old mobile, driving along past the seashore, then when you loose control of the car and finish up in a saltwater lake...They say its a write off, I would buy it, it could be a project for me rebuilding it.


Did you hear that a pilot was taken off a plane heading to America from London, he failed the breathalyser and was arrested.
What was he thinking about?
Now his job is gone, a good job it was too.
Lets hope he doesn't start driving a taxi !
While I am on the subject, make it a "never" drink and drive.

I will be off to London in a few weeks, I hope this guy will be our pilot.


That took great skill when all was said and done, the tower should have sent him on a different heading perhaps against the wind.
Posted by John at 11:15 AM