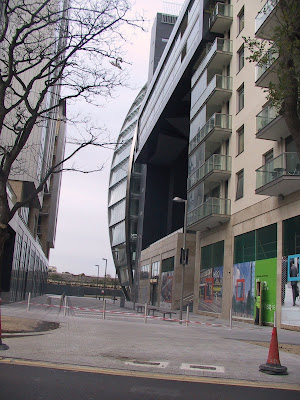 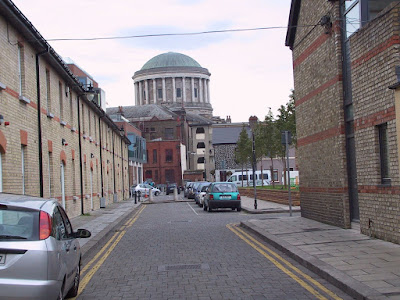 This is the traffic heading into Newry the other day, the sign announces times of blasting for the roadworks. There was plenty of blasting around this area in the last 40 years.


Just thought I would share this moment with you..

I will never understand them.

Today I was cruising around looking for work, I came down the South Circular Rd. heading for Heuston when a highly animated guy flagged me down, he was very rough for sure 2 black eyes and I thought he might have been one of the many druggies heading for Ballyfermott clinic.
"Don't start the merer son this is for you". With that he put e12 into my hand, "AC Bowes the chemist" says he..Now that is only a e4.10 fare and I was insisting he took back at least 7 euro...
He would have none of it.
"Loads of people drove past, you stopped, Jesus it was a rough night last night. I'm homeless and I managed to find a box and a big cloth like a painter uses so I wasn't so bad, I haven't warmed up yet so I can't walk."

Some chemists dispense methadone, Bowes is one of them.


Contrast that with the lift from Ballsbridge. A bloke stopped me beside Jurys, and I waited while she said goodbye,, kiss, kiss,, more of the same....Wonderful..Call you BYEEEEE etc etc.

Then she got in, going to\\\XXXXX .Off we went and when we got there I noticed that I hadn't started the meter. So I guessed that it should be around e15...Well she took great offense and started to rave. I explained that it was tariff 2 which started at e4.75. "Look Its late, you tell me how much it should be then."
She paused and said nothing then went in to get the babysitter 10 minutes later we were on our way, the babysitter was pleasant enough, a girl from Eastern Europe on minimum wage making her way. I gave her e32 change from the 50 she gave me and decided that some day I will drive the route again, just to measure it for sure, why waste my time though she was getting good value.
One other thing was that the mistress came out and made a point of writing down my numbers, standing 6 foot from my bumper.(She should have gone to specksavers)

Plenty of drivers turn on their meters and drive around with it running hoping that the punter won't notice e6 or e8 on the meter when they get in.

On the other hand that long running dock strike is over, I dropped by today to leave in photos I had taken of them.
I hope they have a good Christmas.
Don't buy a taxi lads.

My wife got a book on dealing with stress, in it Paul McKenna says that you should look for a happy memory from your day and recall it.

The other day I was heading down Amiens st. turning into Talbot St.
At the lights I looked to my right where a guy in an electric wheelchair was motoring along. Standing on the battery holding on to the handles was a young blond haired girl around 6 years old, full of life. She was leaning forward talking into her daddys ear, both so happy, laughing their heads off.....

Not a care in the world

Some memories are worth holding on to. The others are for the bin.

When someone does something really well It makes me happy.
Like this one again.