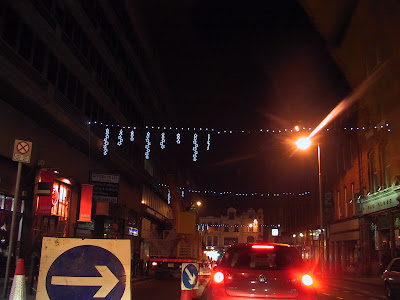 There you are its official. Christmas lights on Georges st. 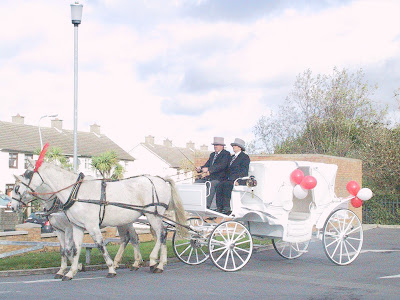 Off to collect the special guest.


The weekend was slow, very slow.But I am not complaining.
I was lucky I noticed the GATSO vans out in the middle of the night.
I often saw them out in the daytime but never at 3 AM
To get caught speeding would spoil your night.

The first on was on Wolfe Tone Quay coming into town from Heuston, the second was in Fairview near the pedestrian bridge, heading back into town. That spot is a 30 mph (can't think in kms/hr} Drivers going back to town at night do 60 to 70 along here.
So good luck on that one lads.

Your thoughts have to go out to a British pilot who was done for speeding. He appeared in court saying he was not driving the car at the time and to prove it he brought in a flight log showing he was indeed high in the sky at the time of the offense.. The police decided to check up on the log and found out that the flight log had been altered and brought him back to court. Forgery, Perjury and indeed speeding charges were put against him.
The old judge was not amused and gave him a fine, points on his licence and three months in jail...Nice one.

Just a thought for a guy I picked up aged 55 years or so, I thought he had MS, so I asked him. "Well if you really want to know whats wrong with me, I just gave up on life, that's all". He told me about his life and his wife who robbed him and lied and turned his children against him. He lost everything (he had a fantastic company), but now he is ill the bank want to take his home.
Some of his friends have employed a barrister and they are going to court soon.
His house is collateral if he looses the court case he looses his house as well.
There is a lot to be said for a Pre Nup agreement.!

If I had money I would adopt people like him,he is really clever and highly qualified. Good company too.

In Ranelagh the other night I was number 3 at the lights, as the lights turned green the first car rolled forward and braked hard as a car zoomed through against the lights.
Number 2 at the lights was an unmarked police car, lights, sirens action .....followed by paperwork.
We have many many unmarked cars driving around at night, take it easy boys and girls.

Look here to see what happened when 2 taxis raced to pick up the same fare in New York, neither one giving way.
I must say I never saw it happen quite as bad as this here, but what happens over there today comes here tomorrow.

I must confess at a slack time last night I measured that trip I estimated to be €15 well I was wrong €12 was more like it, but €18 for the total was dead on.

I must get a life! "Toys 4 big boys" was on in the RDS. Gadgets cars cameras Phones. Computers....and I didn't go.
All work and no play makes Jack a dull boy.
No wonder Jack is a dull boy.

I was telling a girl about this blog one day and she said.
"I hardly think that anyone would be interested in anything you would have to write about"
I thought about that for a minute then.
Yet people watch "Big Brother" all the time.

Magic! its about as much fun that you can have, with your clothes on.

I am going over to meet this guy again at the end of the month in London.
I met him before a few years ago.
Only one arm,yet he works every day.